These Syrian refugees became Canadians. Just in time to vote.

A small but growing number of the Syrian refugees who have resettled in Canada will be able to vote in this election. It’s a big moment when back home, an election was basically a “theatre act.” 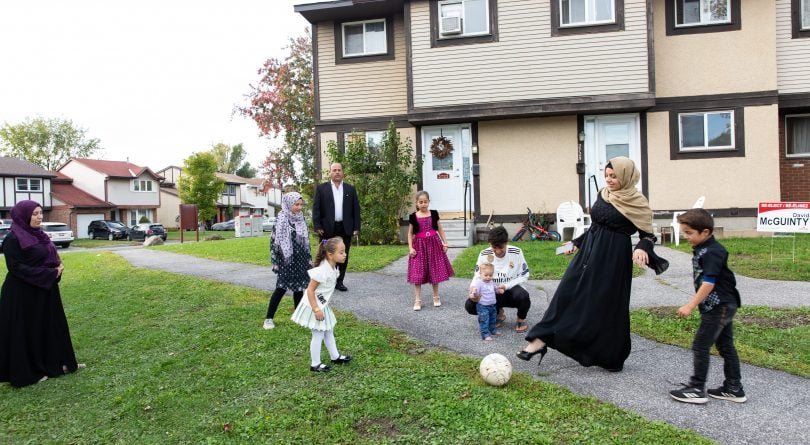 Mohammad and Reem Joudi with their seven children near Ottawa. (Photograph by Kaja Tirrul)

At ﬁrst, Mohammad Joudi did not believe the voice on the other end of the phone. “I thought somebody was joking with me,” he recalls. “They asked if I wanted to travel to Canada.”

Luckily for him, the call was no prank. It was the United Nations refugee agency, scrambling to help the new Liberal government in Ottawa fulﬁll one of Justin Trudeau’s signature promises of the 2015 federal campaign: to welcome 25,000 displaced Syrians by the end of the year.

Holding his cellphone to his ear, Joudi was elated. By that point—early December—his family had not stepped foot in their war-ravaged homeland in more than three years, having fled to neighbouring Jordan in 2012. Offered the chance to suddenly start fresh on the other side of the world, Joudi did not hesitate. On Dec. 27, 2015, just three weeks after that life-changing call, he, his wife Reem and their six children touched down in Toronto—part of the ﬁrst wave of what is now nearly 60,000 Syrian refugees who have resettled in Canada under Trudeau’s watch.

READ: How Syrian refugees to Canada have fared since 2015

Four years on, Joudi is part of another early wave: the small but growing number of those Syrians who, after living here the requisite three years, have obtained Canadian citizenship, paving the way for them to vote in the Oct. 21 federal election. At last count, approximately 500 had passed their citizenship test and sworn the oath; another 13,000 applications are in the queue.

Joudi, who lives in Ottawa, attended his citizenship ceremony on Sept. 13, a Friday morning. He wore a black suit, a white shirt and a red maple leaf pinned to his left lapel. “I was really proud,” says the 40-year-old, who works in construction. “I really feel that Canada is my country now.” (Reem has yet to apply for citizenship because she is still learning English. The children’s applications are being processed. The couple’s seventh child, a baby girl named Ghina, was born a citizen eight months ago.)

“Being able to vote will be a big moment,” Joudi continues. “I am excited. This is the ﬁrst time where I will really vote, you know what I mean? Back home, you can’t vote for anyone you choose. You have to vote for one person.”

The Arab Socialist Ba’ath Party has held power in Syria since the early 1960s, including nearly 20 years under the iron ﬁst of President Bashar al-Assad—whose father, Hafez, was in command the previous three decades. In 2014, Assad “won” yet another landslide victory, garnering close to 89 per cent of the vote in a contest widely denounced as a farce.

“To be honest, the elections are like a theatre act where everyone knows what the outcome will be,” says Tareq Hadhad, a Syrian refugee who now lives in Antigonish, N.S., where he famously co-founded a sweets company called Peace by Chocolate. “Voting there is like a sarcastic democratic act.”

READ: The world has turned on Syrian refugees

Hadhad has applied for Canadian citizenship but is not scheduled to write his test until after the election. In the meantime, he is encouraging everyone—Syrians and otherwise—to exercise their democratic right; it’s shocking, he says, that nearly a third of eligible Canadian voters did not bother to cast a ballot in 2015. “I was born in a country where people have sacriﬁced their lives, their dreams, their hopes, their futures, so they can have an election,” he says. “So no one in Canada, whether Syrian or not, should take voting for granted. There are people dying around the world to reach the level of democracy we have.”

Joudi has witnessed such sacriﬁce ﬁrst-hand. Listening to him talk about the upcoming election—and how privileged he feels to participate—is a tonic for voter apathy that Elections Canada would surely wish to bottle. “I am really happy to be able to express my opinion now, to have the freedom to do that,” he says. “It is a duty.”

Will he vote Liberal, the party that brought his family to their new home? At the moment, at least, Joudi is leaning that way. “I know there are many parties, like Conservatives and NDP, but I don’t know if they will be better,” he says. “The only thing I know is when I came to Canada, I see the Liberal Party.”

No matter who earns his ballot on Oct. 21, this much is certain: like every Canadian citizen, he will ﬁnally have a real say in who governs his beloved homeland; like too few of his new compatriots, he prizes it.

This article appears in print in the November 2019 issue of Maclean’s magazine with the headline, “The joy of voting.” Subscribe to the monthly print magazine here.