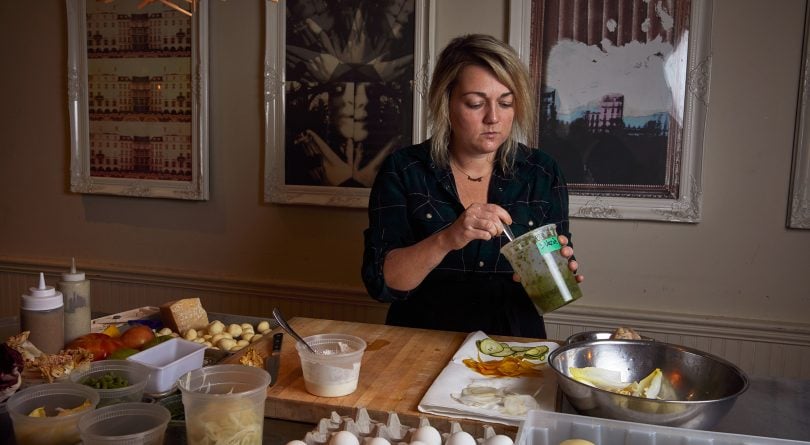 The ﬁrst time 30-year-old Sarah Best saw a Levo—a slender countertop appliance that could easily pass as a Nespresso machine—she knew it was the answer to her prayers. It was January 2019, and Best was at Love Child Social House, a co-working and event space in Toronto, for a demonstration on cooking with cannabis.

The Levo machine seemed pretty simple to use. It contained a reservoir that held a few cups of fat—olive oil, butter or coconut oil, for example—and a pod to hold the dried “herb” of one’s choice. Pop the herb pod into the oil, set the temperature and timer, and walk away. After a few hours, herb-infused oil is dispensed for use in cooking, baking or garnishing dishes.

A few months earlier, Best had come up with a business idea. She has a background in hospitality and had taken a keen interest in learning more about cannabis throughout the legalization process. “I used cannabis at home,” Best says. “I thought to myself, now that it’s going to become—hopefully—less stigmatized and more normalized, people are going to want to engage with it in a number of ways.”

READ MORE: Everything you need to know about legal weed

Best wanted to combine cannabis with a gourmet culinary experience, an evolution from the “edibles”—gummies, chocolates or cookies—that most consumers still think of when they hear the word. She envisioned a multi-course meal cooked by an established chef that would be microdosed with weed. In March 2018, she hosted her first dinner, a gluten-free, plant-based meal made by Toronto-based chef Tonya Papanikolov. The dinner series, which Best named Dirt, has so far held an event every month in 2019, charging between $80 and $140 per diner depending on the location and chef partner.

Best is part of a wave of entrepreneurs, chefs and gastronomy enthusiasts who are exploring new terrain in combining food with cannabis. And the trend goes beyond unlocking the plant’s psychoactive and medicinal properties. This group of connoisseurs is beginning to think about the ways in which cannabis can elevate taste, too. 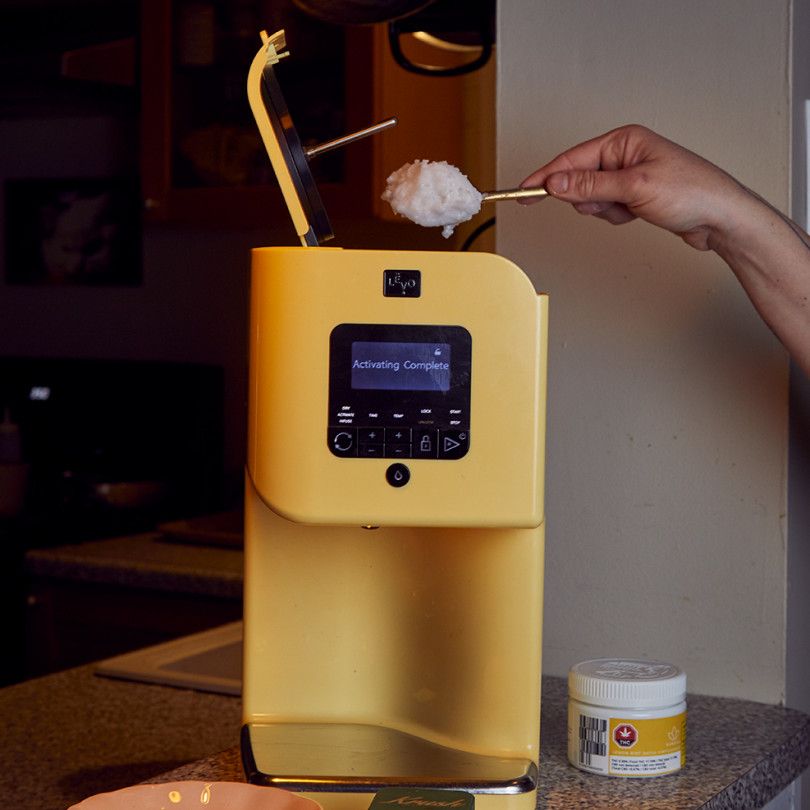 A Levo machine for infusing oil (Photograph by Christie Vuong)

Chef Charlotte Langley, 36, has worked at some of the country’s top food establishments, including Ottawa’s Beckta restaurant and wine bar, and Cafe Belong at Toronto’s Evergreen Brick Works. About 2½ years ago, her Toronto-based colleagues Nate Middleton (who goes by Nate Tasty) and Steve Gonzalez asked her to collaborate on what Langley says was a “very secretive” cannabis brunch. She’s been cooking with cannabis ever since.

For Langley, the most exciting part of creating cannabis-based dishes are the terpenes—the flavour profiles of certain strains—which are now being spelled out in most cannabis packaging. There are about 100 terpenes found in the cannabis plant, and each strain has a certain “terroir” depending on where it was grown. Some common terpenes include caryophyllene (spicy and peppery), linalool (coriander and delicate florals), and trans-nerolidol (jasmine and lemon grass).

“If I want to make a lavender chocolate truffle, I’d choose a pinene,” Langley explains. “A pinene terpene, which is pine-scented and pine-flavoured, will pair well with lavender, so you’ve got a pinene-lavender truffle.”

RELATED: The Maclean’s Quiz: How much do you know about cannabis?

There are even what Langley calls “the old-world strains”—weed’s equivalent of the bordeaux—that are native to North America. It doesn’t make your meal superior if you opt for an old-world strain over a newer one, Langley explains, likening the difference to that between heirloom and conventional tomatoes. “It’s not better or worse,” she says, “just different.”

Thirty-six-year-old Cassandra Mosher is the sommelier at Vancouver’s Como Taperia. This year, she was approached by Dan Sutton, CEO of B.C. cannabis producer Tantalus Labs, who was a regular diner at the restaurant where Mosher used to work. Sutton asked Mosher to create cannabis “tasting notes” for Tantalus’s six strains, which would be packaged as videos and put up on the company’s Instagram.

There isn’t an industry standard when it comes to cannabis tastings, Mosher says, but it’s only a matter of time. “We’re kind of making our own rules right now, but I think a few years from now, you will see cannabis sommeliers,” she says. There are classic pairings—a rustic bisteca with more of an earthy strain; a summer salad paired with something fruity, like Tantalus’s Blue Dream, which has “flavours of blueberry syrup and hints of brown sugar and caramel,” according to Tantalus’s website. 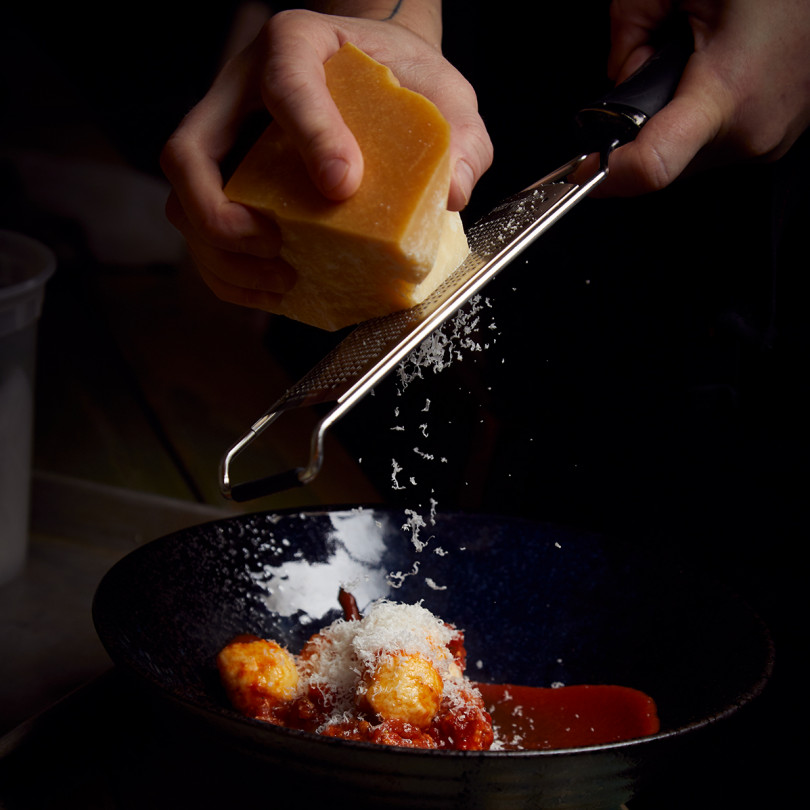 Mosher conducts her tastings the same way she breaks down a glass of wine: “We put the dried flower in a clear glass, so the first thing I do is make comments on colour, the number of crystals and how big the actual bud is,” says Mosher. “Then the next thing would be to nose it—it’s where I get most of the characteristics of the strain.”

There’s been such a demand for cannabis-infused dining experiences that Langley hosts private dinners—five courses with wine and whisky—for select clients inside her west-end Toronto home. And while she’s been asked to cook with cannabis for large events with 80 people or more, Langley has politely declined. She’ll only seat up to eight people at a time. Cannabis dosing is fickle, and reactions to tetrahydrocannabinol (otherwise known as THC), the psychoactive component of cannabis, vary based on gender, age, weight and lifestyle.

READ MORE: Cannabis at Canadian Universities: Which schools and programs report highest use?

Caroline MacCallum is a clinical instructor at the University of British Columbia’s faculty of medicine and the medical director of Vancouver-based Greenleaf Medical Clinic, where she has developed cannabinoid treatment plans for some 3,000 patients. If people are going to dabble in recreational cannabis through food, she says, they should start with one to 2.5 milligrams.

THC’s psychoactive effects can occur hours after eating; it’s a precarious time frame that can lead to over-ingestion. MacCallum’s patients increase their doses in 2.5-milligram increments as they develop a tolerance. “If you jumped to 10 milligrams, having not tried 2.5, five or seven, you would likely have some side effects like palpitations, and you may feel a bit anxious,” MacCallum says. 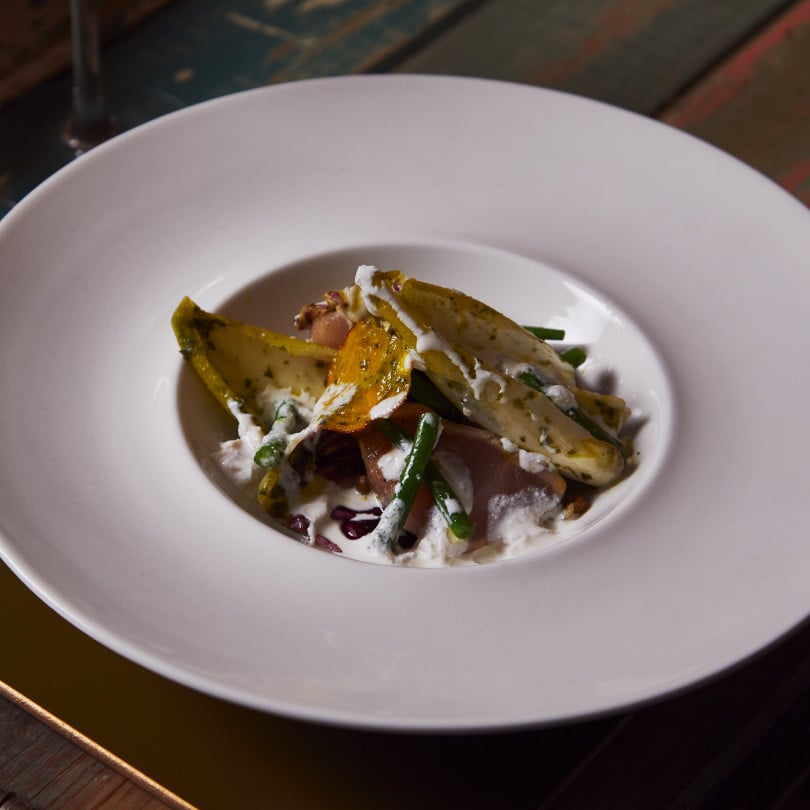 Urban, millennial women seem to be the drivers of the dining-with-cannabis movement. Based on Levo’s statistics, 60 per cent of its customers identify as females living in big cities like New York, Chicago and San Francisco. Their largest demographic of buyers falls within the 25-to-35 age range: customers who are willing to spend more on well-designed products and who are passionate about wellness.

The demo accurately reflects Best, who says that the next trend she’s watching in food and wellness is the microdosing of psilocybin—otherwise known as “magic mushrooms”—which have naturally occurring hallucinogenic properties.

Everyone is welcome at the Dirt dinner table, Best says. The common thread between diners is an appreciation for high-quality ingredients and novel dining experiences. “I take a deep interest in what I eat,” she says. “The Dirt audience are the people who watch Chef’s Table, people who are not just interested in the food that comes from where they live, but they’re interested in food holistically. I think that we create an environment that supports that mentality.”

This article appears in print in the January 2020 issue of Maclean’s magazine with the headline, “This bud’s for stew.” Order a copy of the Year Ahead special issue here. Subscribe to the monthly print magazine here.