'The most fiercely protracted battle this earth had ever seen'

The year 1916 marked the point of no return in the First World War. A look at the titanic French-German struggle at Verdun 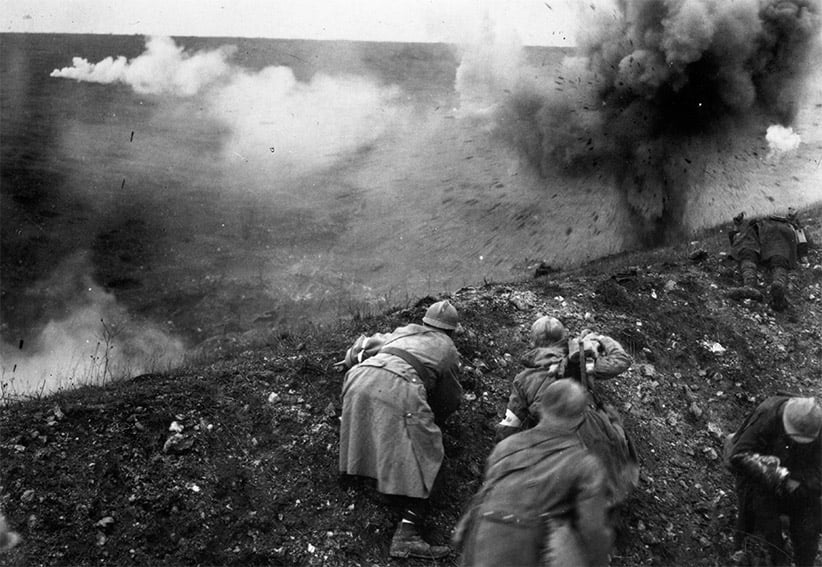 French troops under shellfire during the Battle of Verdun. (General Photographic Agency/Getty Images)

To commemorate the centennial of 1916—an under-recognized turning-point year in world history—Brian Bethune will write a story highlighting a crucial event. Click here to read other entries in this monthlyseries.

Irish historian Keith Jeffrey makes a forceful argument in 1916: A Global History that 1916 was the hinge year of the First World War. Its battlefield slaughter and the “cracks in the bodies politic” made it “impossible to return to the status quo ante,” says Jeffery, and presaged the collapse to come of the pre-war world. 1916 is divided into 12 chapters that follow the war from January to December, and each month Maclean’s will revisit the events Jeffrey highlights.

The titanic French-German struggle at Verdun was the first battle to embrace the Great War’s inexorable logic of grinding attrition. It ran from February to December, and was the bloodiest of all, claiming 700,000 casualties on the two sides. From whatever perspective Jeffrey examines it, grand strategy or ordinary soldiers’ experiences, Verdun appears as a microcosm of the entire conflict. It was a German general who first proposed the idea of victory through attrition, proposing an attack that would “bleed France to death,” but when the assault came the Germans had another aim, a classic overwhelming victory. It was the French, realizing that Allied manpower reserves outnumbered their enemies’ forces, who grimly settled down to the meat grinder approach. We will win, a French army report concluded, “if sacrifices are ignored and reserves are sufficient.”

The accounts of survivors on both sides vividly express just what that meant. Lt. Henri Desagneaux, described the nightmare of merely getting his men into place—they couldn’t dig trenches where they wished because the ground was full of corpses of men buried alive by an artillery barrage; Desagneaux’s men were twice raked by friendly fire, once by artillery—par for the course for all combatants in a war where communications technology consistently lagged destructive capacity—and once by fellow French troops who blundered upon them. Desagneaux and his troops only had one morale lifting moment, when the Germans launched an attack: they held fire until the Boche were only 10 metres away, then destroyed them. By the end, the war’s greatest battle was concentrated on two 1.5-km stretches of the front, a Dante-eque, endless-loop story of ground taken, lost and retaken at appalling cost. A hilltop village was so strategic that both sides attempted to mine and blow their enemies out of it during successive occupations; long before Verdun limped to its essentially status-quo-ante conclusion, both village and hill had been obliterated.

The two armies adopted different strategies for their manpower needs. The Germans valued experience, and often kept troops at the front for lengthy periods, a practice that had its costs—one German officer, whose regiment was at Verdun for the entire 10 months, called his surviving men “psychotics.’ The French opted for much shorter front-line stints—Desagneaux’s unit went through all its horrific experiences in 16 days—a decision that had both short- and long-term repercussions. There was only one narrow approach to the front, chockablock with rotating French forces and constantly raked by German artillery. The often raw conscripts who survived the journey to the battlefield were there only long enough to gain a fraction of the experience of their German counterparts.

But it was the downstream effects of the French practice that were the most historically significant. The rotation was such that almost the entire army—including Charles de Gaulle, who was wounded and captured there—served at Verdun, and “there was scarcely a family in France untouched by the battle,” Jeffery writes. The experience was scarifying on a national level, and played a role in the French army mutinies of the following year, the poisonous French demands during the Treaty of Versailles negotiations, and in the despairing national reaction to Hitler’s Blitzkrieg advances of 1940. They are all traceable, at least in part, to what poet and medical orderly Laurence Binyon called “the hugest and most fiercely protracted battle that this earth had ever seen.”