The pandemic has proven that the individual is not supreme 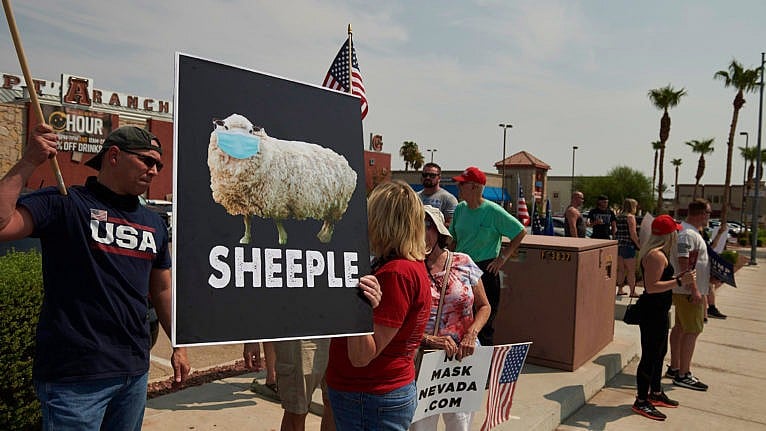 With some glaring exceptions, people are wearing masks as a way to show compassion for others (Bridget Bennett/AFP/Getty Images)

If there’s one symbol we’ll remember from a year we’d rather forget, it’s the mask. That fabric first line of defence against the coronavirus. The unsmiling, unfrowning face we all presented to the world when in public. But more than it being the representation of our (concealed) stiff upper lips in the face of adversity, masks have come to represent the face of compassion, of care. The thin cloth veneer provides little health protection for one’s self. We wear them to protect co-workers, colleagues, friends and absolute strangers.

English poet John Donne’s observation that “no man is an island entire of itself; every man is a piece of the continent” seems to be taking hold in Western culture, 397 years after Donne first wrote this meditation after recovering from serious illness. With some glaring, cantankerous, rally-prone exceptions, populations throughout the democratic world surrendered individual liberties for the sake of the collective by staying home for several months of the year, and limiting contact with friends and family for the rest of it. We bought into this idea even when it became clear the virus doesn’t seriously afflict most of us; we kept following public health dictums to protect the elderly and vulnerable among us, and to keep our public health systems from buckling under the massive burden pandemics can inflict on hospitals.

All of this has marked an abrupt break with a rising ethos in liberal democracies—a freedom-loving, don’t-tread-on-me (or tax me) spirit that became central to our public and personal lives over the past four decades. And whether from fear of the virus or clear-eyed pragmatism, it has happened with far less upheaval than anyone might have imagined.

Beyond lockdowns, capitalist democracies embraced sudden expansion of the economic safety net to unprecedented levels, supporting those forced into joblessness, or whose careers went on indefinite hold. Support for such measures was near-universal. Yes, ballooning deficit levels have many political leaders and observers tugging anxiously at their collars—and rightly so. And yes, fiscal hawks have placed their balanced-budget ambitions on hiatus. Yet many conservative leaders have worked—often at the urging of the private sector—to keep the commonweal from collapsing and pulling everything down with it.

In March, as British Prime Minister Boris Johnson was in quarantine with a coronavirus infection that would soon send him to intensive care, he made a video urging Britons to stay home, protect the National Health Service and save lives. “One thing I think the coronavirus has already proved is that there really is such a thing as society,” Johnson said. It was one Conservative Party leader’s rebuke of another: in 1987, then-prime minister Margaret Thatcher remarked that “there is no such thing as society.”

While Thatcher supporters have argued the much-maligned declaration has been misconstrued as a call for ruthless individualism—that it really meant people taking responsibility to support themselves while caring for the needy—Johnson’s comment evoked a popular desire to prioritize the strength of everyone over a loose alliance of individuals.

Elsewhere, German Chancellor Angela Merkel stressed solidarity, collaboration and the “belief that every life and every person counts.” She spoke with the authority of someone who grew up in communist East Germany and was reluctantly locking down the free-market democracy she now rules. South Korean leaders likened the effort to running a national relay race that everyone participated in, notes University of British Columbia public policy professor Heidi Tworek in a study of health communication responses to the pandemic. B.C.’s widely lauded messaging stressed protection of society over that of the self, she observes; Ontario started with “pro-self” campaigns that emphasized distancing but ultimately shifted toward B.C.’s approach.

That collectivist message has overwhelming buy-in, according to a Leger poll in September. Eighty-seven per cent agreed that wearing masks is a civic duty because they protect others from the virus; only 21 per cent said requirements infringe on personal freedoms. Surveys find far greater levels of mask resistance in the United States, in line with the “rugged individualism” that has long defined American culture and has left it more exposed to the pandemic’s ravages.

Does this collectivist mindset last longer than the pandemic does? If it does, leaders could conceivably harness it to launch big fixes for woes the crisis has exposed and exacerbated, like wealth inequality and racial injustice. Then again, we might revert to our previous individualistic, freedom-loving, tax-loathing ways: consider that the period of solidarity during the Great War was followed by the hedonistic Roaring Twenties; that after the Depression and another, even more destructive war came the prosperous 1950s and the baby boomers’ retreat to suburbs and sedans.

Still, there is no shortage of crises to keep us bound together. Many environmentalists have called for a wartime-like societal effort to address climate change, the next deadly crisis barrelling toward us. The pandemic, they warn, has been a dress rehearsal for the longer-term challenge facing humanity. In January, Tom Oliver, an applied ecology professor at the University of Reading in England, released The Self Delusion, a book asserting a scientific and cultural need to stress our interconnectedness. It is his modest attempt, he says, to push back against the decades-long trends toward individualistic attitudes and environmental degradation. Months later, society was forced together, and largely chose to stay that way.

“If there is a silver lining, it helps people to move in that direction where they start to see themselves as part of a global community,” Oliver says. “They see that sense of responsibility beyond their little selves, toward a bigger sense of identity.”