The real taboo in '13 Reasons Why'

Netflix's new series has prompted uncomfortable discussions about teenage suicide. But is there more to the story we're missing? 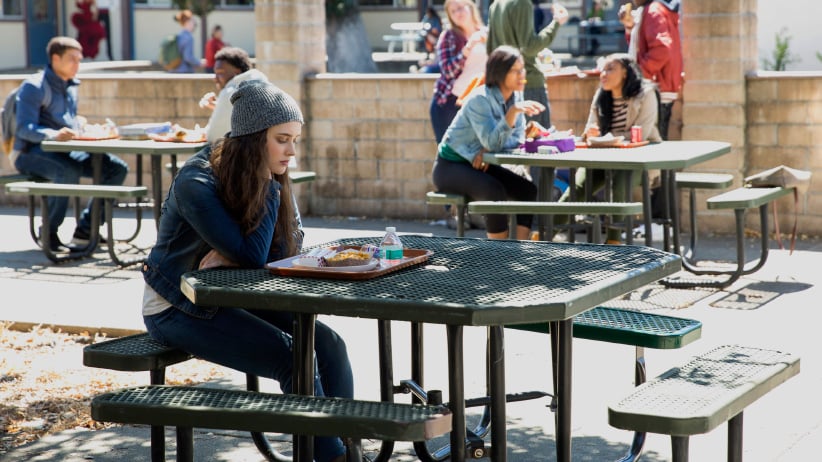 Katherine Langford as Hannah Baker in 13 Reasons Why. Beth Dubber/Netflix)

Last week, the principal of St. Vincent Elementary School in Edmonton sent an email to parents saying “many students are watching and discussing” Netflix’s 13 Reasons Why, and that any further talk would be banned “due to the disturbing subject matter.” The school isn’t alone in censoring conversation about North America’s current binge-watch about fictional 17-year-old Hannah Baker, who dies by suicide, leaving 13 audio tapes; each tape blames a classmate for a reason she ended her life, a list that includes broken friendships, bullying, slut-shaming and rape. Other school boards across the country have vetoed in-class or on campus discussion, seemingly oblivious to the fact that ordering kids not to talk about, or watch, something is destined to have the contrary effect.

MORE: Why we should be encouraging kids to talk about 13 Reasons Why

Such sturm und drang has rendered 13 Reasons Why a cultural flashpoint in the long-running discussion of suicide and its taboos, a continuum that includes Kurt Cobain’s 1994 death, Robin Williams’s 2014 suicide and the more recent, short-lived outrage over a spate of suicides among First Nations youth in Attawapiskat, Ont. That greater outrage is being generated by the fictional depiction of mostly white, mostly affluent kids than by real-life despair among Indigenous teens should give us pause, as should Netflix’s power to drive the cultural conversation.

Educators and mental health experts have rushed to voice concern that the series “normalizes” and even glamorizes suicidal behaviour in ways that may lead to copycat behaviour—or a “contagion effect.” Paradoxically, this moral panic over the now-overhyped 13 Reasons Why has rendered it a textbook case of what experts say we should avoid: front-page coverage, details about the method, photos of and admiration for the deceased.

Here Cobain’s death, which summoned similar fears of contagion, is instructive. Suicide rates declined after he took his life, credited to increased crisis outreach and media coverage breaching the secrecy and stigma surrounding suicide. Likewise, the Netflix series has summoned an ostrich response while galvanizing discussion and resources: Ottawa’s Community Suicide Prevention Network, for one, offers tools and conversation points for parents. Reflexive fear that suicide will be “normalized” among impressionable youths is understandable, especially now that it can be livestreamed on Facebook, as witnessed in the horrific January death of a 14-year-old girl in Florida. Here, the series’ messaging is patently irresponsible—it perpetuates the myth that you can narrate your story, even exact revenge, after death; that self-harm can make an unpopular girl the centre of attention; that suicide is a choice driven by others’ behaviour. Other takeaways are more subtle: Hannah is not the hero (that role belongs to a boy wracked by guilt and regret as he listens to the tapes). The series also emphasizes the need for empathy, showing you never know what’s happening in someone’s life, that small slights damage others.

Yet for all the furor over “normalizing” suicide, there’s been radio silence over 13 Reasons Why’s depictions of other “disturbing” aspects of high school life—bullying, the objectification of girls, slut-shaming, violence, sexual assault—that the show has brought to the fore.

Nobody’s tuning in for a PSA, of course. They want to be entertained. And what they see is a violent landscape in which teenage boys set the tone and rules, with the popular star jock doubling as a sexual predator. Girls, though capable of treacherous behaviour, tend to be victims. “That’s how it is in high school—boys talk, girls listen,” one male character says. The bullying and slut-shaming Hannah endures is waved off: “Nothing happened to her that doesn’t happen to every girl at every high school,” one boy says.

RELATED: The price of privilege: Netflix’s ‘The Crown’ takes on Queen Elizabeth II

When Hannah goes to the guidance department to say she feels “lost” and tries to report being raped, she’s not believed. “Maybe you consented but you changed your mind,” the counsellor says, before suggesting she “move on.”

That heartbreaking, infuriating scene, shockingly, was cited as a reason the Hamilton-Wentworth District School Board sent out a directive expressing its concerns about the series; it recommended it not be used as an in-class “teaching tool,” while encouraging parents to discuss it with children at home: it cited the show’s “negative portrayals of helping professionals which may prevent youth from seeking help.” Think about that. 13 Reasons Why may be fiction, but the questions it has raised, the biases it has exposed and the distance still to go are very real.

Clarification: This post has been updated to note that the Hamilton-Wentworth School Board did not “ban” classroom discussion of the series; it instructed that teachers not initiate discussion, while providing guidelines for its mental health leadership teams.