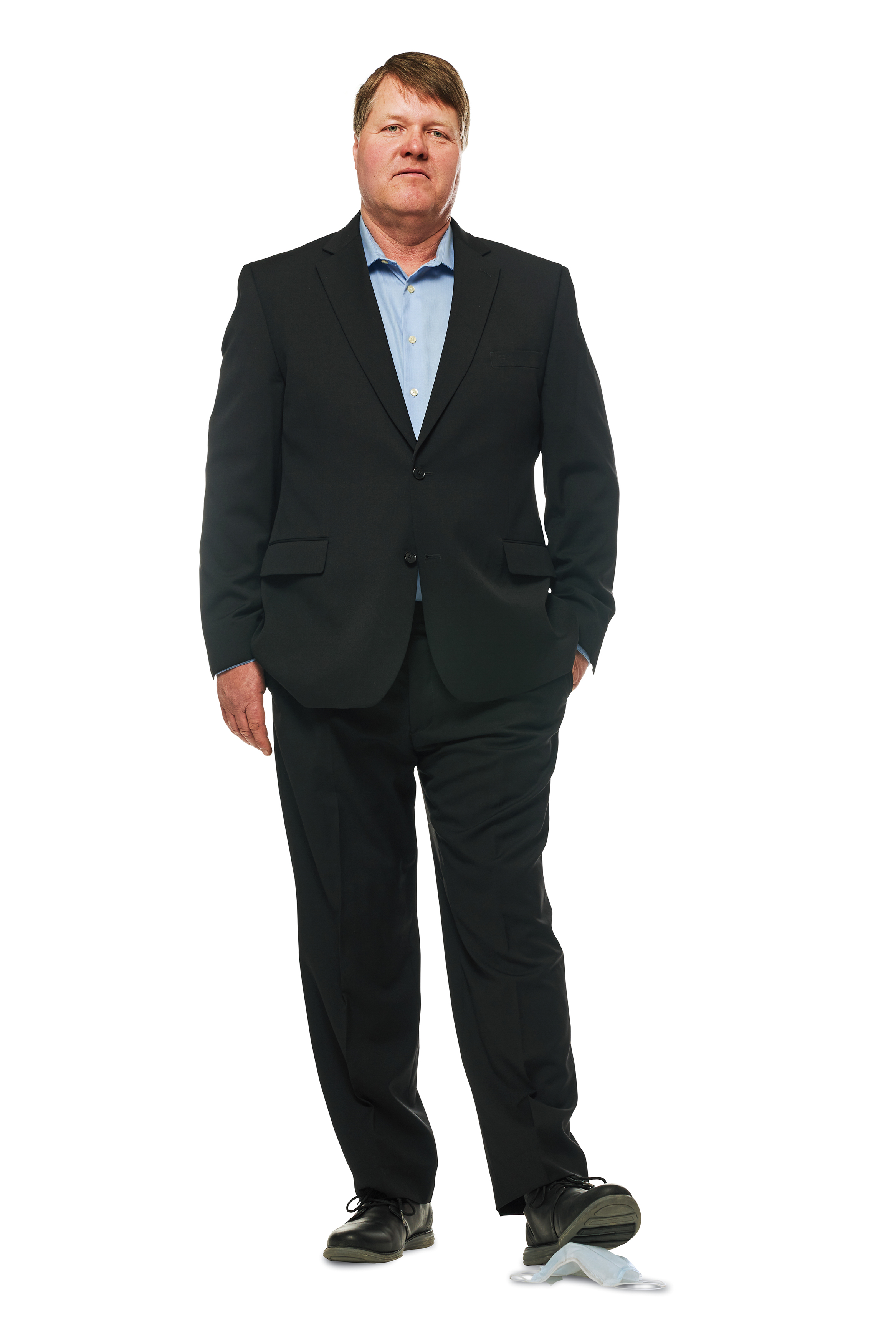 Lewis Weiss. This portrait was taken in accordance with public health recommendations, taking all necessary steps to protect participants from COVID-19. (Photograph by David Lipnowski)

A retired chiropractor, presented as a doctor to the crowd of coronavirus doubters, finished his rally speech to hoots, whistles and car honks. He’d commented on debunked claims that vaccines cause autism and reprogram DNA, and he’d mused darkly about the agendas of Bill Gates and the United Nations. But the emcee of the “Hugs over Masks” event was particularly excited about the “courage” of the next speaker: “My heart goes out to this politician. My heart explodes for this politician. We’ve got La Broquerie’s reeve here!”

Lewis Weiss, an auto-detailing shop owner, 55-year-old grandfather and YouTube-loving elected official, took the flatbed trailer serving as a stage in Steinbach, Man., a town that neighbours La Broquerie, Weiss’s mostly rural community. It was Nov. 14, during the height of Manitoba’s pandemic wave, when such large gatherings were prohibited. Weiss told attendees about videos with alternative theories about COVID (banned from YouTube as misinformation); about unproven “simple medicines” that “fix” the virus; about how people die all the time for all kinds of reasons. “My council did not send me here to speak, although many of them share my views,” he claimed at the rally.

The anti-mask organizers wanted a politician, any politician, to attach to their cause. With Weiss, the cause got attached to the politician—with severe repercussions. The RCMP handed the reeve a $1,296 fine for violating health orders. Premier Brian Pallister likened him to flat-earthers, and urged Weiss to accept that the pandemic was active in his area (by mid-February, it had killed 15 people in the health zone comprising La Broquerie and another county). Weiss faced calls to resign.

But he’s remained defiant, repeating to Maclean’s his use of the term “plandemic”—a conspiracy theory suggesting the crisis was intentionally created for ulterior motives—and saying he won’t pay the fine. Weiss says he’d kept views to himself earlier on, but decided to speak up as residents’ economic anxiety re-emerged in the fall. “I assure you the majority of them by far are extremely happy somebody was finally willing to say something,” he says. In January, he attended another, similar rally.

La Broquerie councillors ordered a third-party investigation, and ultimately voted 5-0 to suspend him without pay for 45 days for violating his municipality’s code of conduct. Weiss attended the November rally despite warnings not to, says Deputy Reeve Ivan Normandeau, who leads council during Weiss’s suspension: “It kind of forced our hand.”

Weiss’s actions split the community—some are now for masks, others against. Normandeau says the reeve wasn’t previously known for doubting science, but the lousy publicity has carried beyond Weiss, souring relations with nearby municipal councils. At Normandeau’s banking day job in Winnipeg, people have asked him: “Hey, don’t you live in La Broquerie?”

Weiss vows to appeal his suspension. He continues to spout misinformation about vaccines, mask usage and science. And he wonders why fellow politicians don’t doubt accepted findings about COVID the way he does, saying, “I can’t believe they would believe it.”