The season that made "Mr. Hockey" 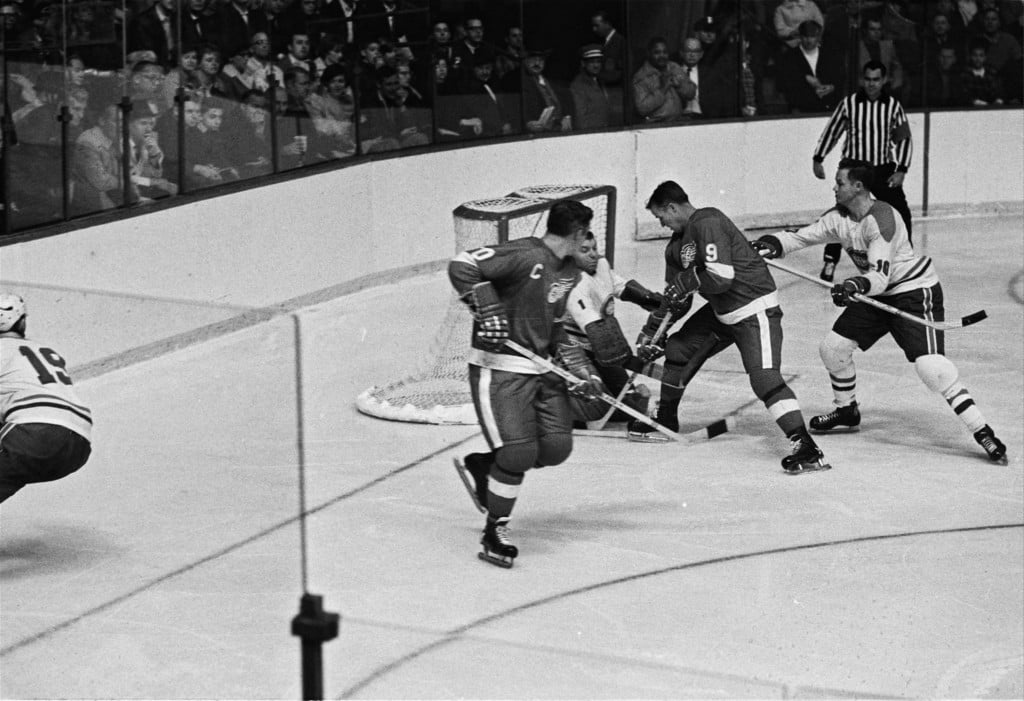 The 1968-69 NHL season was a strange one. In their second year of existence, the St. Louis Blues made their second straight appearance in the Stanley Cup final, guided by a young, ice cube-sucking coach by the name of Scotty Bowman. The league held its inaugural Miss NHL pageant, crowning the former Miss Minnesota North Stars, Lynn Marie Stewart (she’s one of three women to hold the title—the idea quickly fizzled).

And for the first time in his 22-year career, Gordie Howe scored 100 points. One hundred and three, to be exact.

Howe was one of three players to break the three-digit barrier that year—Phil Esposito racked up a stunning 126, while Bobby Hull recorded 107—which no one had done before. But the number is less important than the age at which Howe did it. Near the end of the previous season, members of the Detroit Red Wings had gathered at a restaurant to celebrate Howe’s 40th birthday. When he began playing pro hockey, five of them hadn’t been born.

So, if you were to pick a season that captures Gordie Howe’s legacy to hockey, you could hardly do better than 1968-69. The brilliance, the frustration, the strength, the kindness, the spanning of generations—all of it merged during a year of turmoil inside and outside the game. It didn’t end with Howe hoisting the Stanley Cup, as he’d done four times, but it was a year that illustrated as never before his value as a player. Perhaps more importantly, it showed him his own value to the game.

It was prefaced by a trade that would send a bolt of energy into the veteran’s plateauing career. Late in the 1967-68 season, Red Wings general manager Sid Abel relieved the Toronto Maple Leafs of unhappy left-winger Frank Mahovlich, taking the 30-year-old in a blockbuster deal involving rights to eight players.

Mahovlich recalls the move as a relief: he’d been chafing under the frowning presence of Leafs coach Punch Imlach. And when he got to Detroit, the Wings amassed their firepower on a single line, uniting him with Howe and talented winger Alex Delvecchio, producing instant results.

“We had a great chemistry,” recalled Mahovlich in an interview Friday. “It seemed like we were on the same wavelength. We never spoke, but we understood each other just by thinking. Spots would open up, I’d go in there, and Howe would put the puck on my stick. It was an amazing year for me.”

The trio worked with such well-oiled precision that it became known as Production Line II, an allusion to the unstoppable force Howe had formed nearly two decades earlier with Abel and Ted Lindsay. It was the highest compliment the inhabitants of Motor City fans could bestow. Howe had won four consecutive scoring titles playing on the original Production Line, but the new iteration smashed the single-season record for points by a single line, with 264. “They were like one person on the ice,” Mahovlich’s wife Marie later recalled. “It was fabulous, wonderful hockey.”

Almost as wonderful for newcomers to the Red Wings was the friendship with Howe they came to prize, recalling the warmth with which he welcomed them. Mahovlich remembers Howe taking him and his family skiing at a small hill outside Detroit—”the Big M” had never tried the sport before. Howe invited Bobby Baun, another former Leaf who arrived in Motown the following summer, to bring his wife and five children to the Howes’ lakeside cottage.

Alas, the wonder stopped with the Howe line. Garry Unger, a blossoming young forward sent to Detroit as part of the Mahovlich deal, couldn’t carry the second line on his own, and there was an odour around the Wings’ plodding defence. Christmas had come and gone before the team had strung together more than two wins in a row. They finished the season out of the playoffs, with 78 points.

But hockey was changing, and so was Howe’s outlook. A decade earlier, he’d rebuffed a cadre of star players wishing to stand up to the NHL owners’ egregious underpayment of the men whom the fans bought tickets to see. He’d come to regret that decision, and now, finally, the ground was shifting. With talk circulating of a rival league starting up, the NHL had expanded to 12 teams. The price of star talent was going up. Players were developing a sense of common cause.

“When we’d go into different cities, you might go to the other team and say, ‘Okay, who needs a point or a goal for a bonus?’ ” Bobby Hull is quoted as saying in The Big M: The Frank Mahovlich Story, a biography written by Mahovlich’s son, Ted. It’s not that they’d let up, Hull hastened to add. But quietly, throughout the game, he said, they’d urge the opponent on.

So it went in the Wings’ last game of the season, a March 31 visit to Hull’s Chicago Black Hawks. Howe went into the game with 99 points. Mahovlich had 48 goals and was itching for 50. The game ended a 9-5 blowout for the Hawks, but Howe popped a goal—his 100th point—at the 23-second mark of the second period, adding two assists for good measure.

Mahovlich, who scored once to reach 49, remembers less about the game, or his own disappointment, than the weight of his teammate’s achievement. “Gordie had gotten 100 points for the first time in his life—at age 40,” the 78-year-old marvelled over the phone from Seattle, where he was visiting family. “Imagine the kind of athlete it takes to do that.”

It imbued Howe, in fact, with iconic status that his team’s owners didn’t fully respect. That summer, the Wings brought in defenceman Carl Brewer, and Baun recalls Howe’s outrage upon learning that he—”Mr. Hockey”—would be the third-highest-paid player on the team at $45,000 per season. “Carl ended up making more than Gordie Howe,” Baun wrote in a memoir. “But hell, I was making more money than Gordie Howe, and was Gordie ever upset when I told him so.”

Related: From the archives: Gordie’s return to Saskatoon in 1966

Alison Griffiths, co-author of Net Worth, a book chronicling the rise of the players’ rights movement, believes that was a moment of epiphany for Howe. It was then that he put his business affairs into the hands of his savvy, hard-driving wife, Colleen, who quickly negotiated him a 120 percent raise. “I think it hurt Gordie,” said Griffiths, who in the early 1990s spent months convincing Howe to open up about his financial past. “He felt the game, the league, had let him down. He told me that, basically, he trusted them to know he was the best damn player in hockey.”

More importantly, for the first time, Howe understood why he owed it to other players to maximize his own value, and he started to consider his options. Plagued by injuries, he retired in 1971 to take a public relations job in the Wings’ front office. Dissatisfied with the work, he decided to make a comeback. But when he returned, it was with the Houston Aeros of the upstart World Hockey Association, where his salary dwarfed any he had made in Detroit. There, he played alongside his sons Mark and Marty, winning two consecutive championships and, at age 46, the league’s most valuable player honour. Said Griffiths: “I have no doubt whatsoever that that was a big poke in the eye to the NHL.”

It might explain why, in 1991, Howe stood by retired players seeking legal redress for the mishandling of their pensions, though he wasn’t personally in financial need. Griffiths believes he carried guilt over his failure to stand tall for the rebel players in the 1950s, and felt he owed it to them to lend his name, showing that even the game’s most beloved figure had been taken for a ride.

In short, his view of hockey, and his place in it, had changed for good, and you could draw a straight line back from that shift to one uncommon year in the life of the sport he loved. Much transpired after 1969. But that, more than any, was the year the Saskatchewan farm boy grew up.