This awful year may have reset our ability to appreciate happiness

Experts think that after months of depriving ourselves of everyday pleasures we once took for granted, our newfound appreciation for the little things might actually last beyond 2020 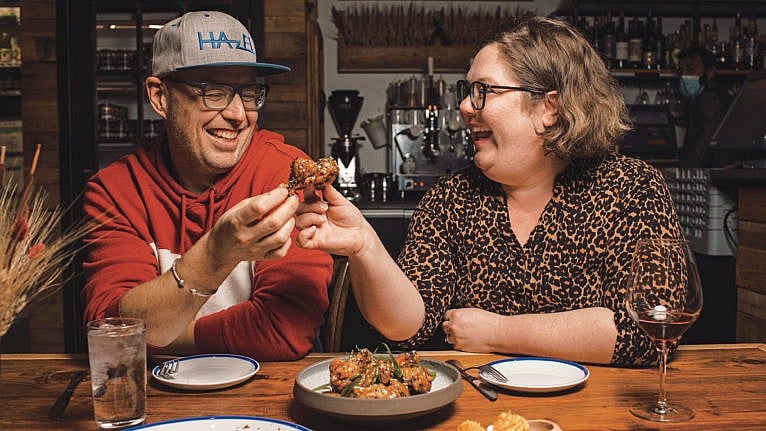 In October 2015, when Sarah Jackson was due to wed, the bride-to-be made one critical request of the chef hired to cater the reception—the spread had to include chicken wings. It was her fiancé Skylar Seale’s only ask (besides the declaration of consent), and the least she could do to include the groom in the planning.

Not long after the nuptials, the same chef opened a restaurant and the Edmonton couple made it a tradition to celebrate their union there. So, when their fifth anniversary landed on Thanksgiving weekend during a pandemic, Jackson made plans to spoil her husband with his original wedding day wish. It had, after all, been a tough year, and only the second time that the pair had indulged in a dinner date since March, when COVID-19 officially upended life as we knew it.

It wasn’t until they were at the restaurant that Jackson realized she had slipped up. In the hustle to schedule the evening, she had forgotten to confirm her request with the kitchen, and confessed as much to her husband.

For the gregarious father of two, so much depended upon a plate of chicken wings, glazed with hot and sweet sauce. “I was crushed,” Seale says. “I don’t know why, but I tried to let it go and put on a smiley face for Sarah, which I’m not good at.”

The mood, however, would only last for as long as it took the chef to appear tableside with a gesture that filled Seale’s heart to bursting. “They came out with the wings,” he explains, “and I felt—it was so special. I cried for like 10 or 15 minutes.”

Any other year he might have responded with more composure. But for the self-described “hugger” whose wedding vows stipulated “building community” as a priority, the social isolation and distancing wreaked by the pandemic severed connections to several sources of happiness in his life. Her husband’s outpouring didn’t come as much of a surprise to Jackson, who also puts a premium on social ties. The hassle and risk of arranging time out in public have made moments like that one in the restaurant shine just a little brighter for her. “Because they’re so hard to get, these things feel more like grand gestures,” she says.

If 2020 is a year marked by a dearth of joy, then 2021 might be the year that happiness, or at least our ability to appreciate it, gets a reset.

Unfortunately, happiness doesn’t lend itself to an annual measure the same way GDP does, which makes it difficult to chart over time. That’s a gap that Peter Dodds, director of the University of Vermont’s Complex Systems Center, has been trying to bridge with the Hedonometer, an online tool that charts global happiness by analyzing text (in English and eight other languages) on Twitter.

READ: Quarantine nation: Inside the lockdown that will change Canada forever

With a list of about 10,000 commonly used words—scored by human beings on a nine-point scale of “sad” to “happy”—the tool calculates the “average happiness for Twitter” from a 10 per cent sample of the 500 million or so tweets published on to the platform each day.

Although the timeline has been trending sad-ward since 2016, it hit some of its lowest points in 2020 since launching in 2008. First, it was tweets about COVID-19, when the disease assumed pandemic status. Then it was posts about protests against police brutality following the death of George Floyd (currently the lowest point on record). While most happiness free falls on the tool bounce back almost immediately, the drops in 2020 were more like slumps that took months to iron out. “That’s the sign of a traumatized population,” Dodds says. “Individuals have trauma. Small populations have trauma. But this is massive—on a global English scale—and you see it in the other languages as well.”

On March 12, the Hedonometer noticed an uptick in negative terms like “cancelled,” “closed” and “suspended.” However, hidden near the bottom of the word rankings for that day, another term quietly climbed up the list: “hope.”

At the University of British Columbia in Vancouver, psychology professor Elizabeth Dunn has been studying the factors that shape human happiness. A central tenet of research in that field, she says, is that human beings have a remarkable ability—for better or for worse—to adjust to their conditions. Through that lens, we might get a glimpse into how people are responding to conditions surrounding COVID-19, from lockdown to restart.

“The underlying theory is that we adapt to pretty much whatever we’ve got, and so when you change what we’ve got, that can change what we appreciate,” she says. “I think a potential upside of the pandemic is that it may renew our capacity to enjoy some of the pleasurable, little experiences that many of us, prior to COVID-19, probably took for granted.”

In 2013, a paper she co-authored explored “hedonic adaptation,” the human habit of growing accustomed to the things we enjoy, and posited deprivation as a means to resist it. The study followed three groups of students who were asked to eat chocolate in two lab sessions, seven days apart. The first group had to avoid chocolate in the intervening week, while the second were given two pounds of the sweet stuff and told to eat as much of it as possible. A third group, serving as a control, received no instructions but participated all the same. When a week passed and the parties returned for their second dose, the group that had been asked to abstain savoured their treat more than the others.

With an eye to the pandemic, Dunn predicts, the limitations people experience from restrictions—particularly when it keeps them from their bliss—could foster a renewed appreciation for the things they’ve missed.

“Imagine the first time you get to go to a concert again—it’s going to be amazing,” she says. “I think people will be paying attention to it and appreciating it in a way that you wouldn’t have if you had taken measures of that in 2019.”

Before the pandemic, Jackson would treat herself to regular dips at a public swimming pool. She hasn’t been since the first week of March given the high demand for pool time at the few facilities that remain open. But after finally securing a reservation in November, the opportunity has left her positively ecstatic. “I’m dying. I’m so excited,” she says. “Nothing is going to make that not happen.”

However, the ability to adapt, Dunn is quick to note, cuts two ways. In the study, the groups that had an abundance of chocolate and no restrictions savoured it less at the second check-in. And now, with news of a viable vaccine on the horizon, an end to the pandemic is a very real possibility, and with it, a world without public health restrictions.

“Once they’ve gone to 17 more concerts,” says Dunn, “I wouldn’t expect that this [appreciation] is going to last people the rest of their lives, unless maybe you remind them.”

While they can’t deny human nature, both Jackson and Seale believe (on a wing and a prayer) that their new-found appreciation for these little things will last well after their lives return to normal. At the very least, Seale notes, he’s broadened his horizons, and found other sources of happiness. On the balmier days of 2020, he spent much more time with his in-laws, gardening in their backyard and finding comfort in their company.

“I remembered that on Thanksgiving,” he says. “We reflected on that, and how much we held each other up—just our two houses. I don’t think that would have happened if it wasn’t for COVID.”

This article appears in print in the January 2021 issue of Maclean’s magazine with the headline, “Joy to the world.” Subscribe to the monthly print magazine here.