Too many Canadians don't recognize the Islamophobia in their country

Despite numerous high-profile incidents and a stream of everyday instances, some Canadians still ignore or deny anti-Muslim hate 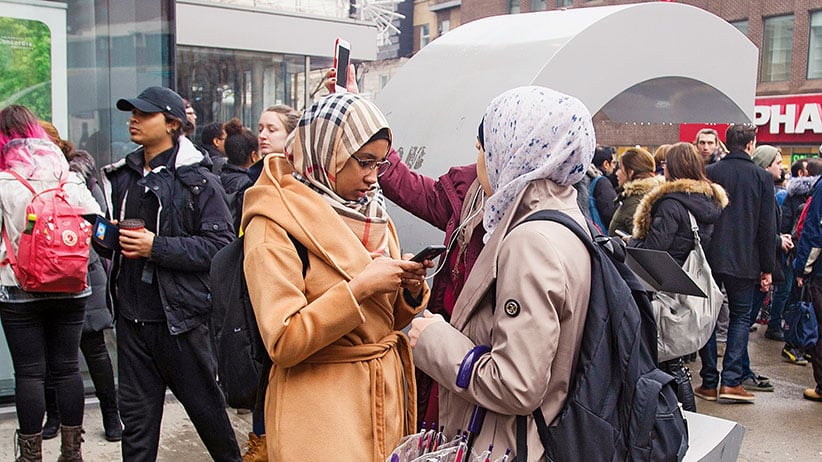 Only six in 10 Canadians think Islamophobia is a problem in their country. For anyone concerned with combatting racism, this is alarming, particularly when coupled with the 38 per cent of respondents to Maclean’s Canada Project survey, in partnership with Abacus Data, who somewhat or strongly disagree that it’s an issue at all.

A fundamental requirement for dismantling discrimination is recognition. So it’s unacceptable that so many Canadians think Islamophobia does not exist—or have a flippant understanding of it. These attitudes disrupt the work of individuals attempting to combat racism, and endanger people by default.

Like anti-black racism, Islamophobia is an insidious, irrefutable issue in Canadian society. Denying its existence suggests white Canadians remain isolated from their Muslim neighbours, leading them to treat them as an alien group. “I think that despite a lot of progress, post 9/11, many Canadians still view Muslims as a homogenous group with only one foot inside the Canadian cultural identity,” says actor, filmmaker and lawyer Arsalan Shirazi. “And any time you can define so many people as the ‘other,’ you can start to strip away the complexity of a community, which allows you to scapegoat and vilify.”

You can see this playing out throughout Canadian society. Take the reaction to a private member’s motion tabled by Liberal MP Iqra Khalid. M-103 was designed to “eliminate Islamophobia and all forms of systemic racism and religious discrimination” and calls on the government to “recognize the need to quell the increasing public climate of hate and fear.” Conservatives attempted to remove the term Islamophobia, with Conservative MP David Anderson claiming the word lacks meaning and the bill could inhibit freedom of speech. But this argument simply fuels the discrimination that the bill attempted to combat, sometimes leading to hysteria, as Faisal Kutty, a professor at Osgoode Hall, has argued. Hateful rhetoric and death threats have been directed against Khalid, including accusations of being a terrorist sympathizer. We’ve also seen a Quran destroyed at a protest against religious accommodation at the Peel District School Board earlier this year. Moreover, there was the Quebec City mosque attack in March, a mass shooting during evening prayers that left six Muslim Canadians dead. Following the attacks, we finally saw something of a national conversation around Islamophobia. Yet Muslim Canadians, academics and activists have been highlighting these issues for decades.

Indeed, plenty of work has already been done to capture, contextualize and fully understand what Islamophobia means. A paper published in 2011 by the Ontario Human Rights Commission highlights the “negative stereotyping and discrimination as a result of pre-existing perceptions of Muslims as ‘different’ from the rest of Canadian society, along with negative associations of their communities with violence and terrorism” in the decade following the Sept. 11, 2001, terrorist attacks in New York City. These problems even occur in institutions that pledge tolerance and inclusion, like Canadian universities. Following the Quebec City mosque attack, Muslim students publicly recounted incidents that are part of their daily reality: the defacing of posters for a conference on Islam at Durham College and the University of Ontario Institute of Technology; and the distributing of anti-Muslim flyers and insults on student election materials at McGill University, the University of Calgary and the University of Ottawa. A student at Simon Fraser University was told to remove her hijab. Last year, a woman had her hijab pulled, and was punched and spat on in a grocery store in London, Ont. (That case has been complicated by a trial that has been suspended as the person charged, who required a Farsi translator at trial, was deemed not mentally fit enough to stand trial.)

We don’t need more evidence—yet there’s still denial by many white Canadians. Exercising privilege in this way has clear detrimental effects, argues Tim Wise, an anti-racism writer and activist. “That white Americans don’t by and large see what people of colour see doesn’t mean that white folks are horrible people, of course,” he writes in an essay called “White Denial.” “What it does suggest is a degree of isolation and provincialism that should lead us to think twice before pontificating about a subject that we simply don’t have to know nearly as well as those who are the targets of it.”

This is why “recognition of Muslims as part of the fabric of this country is so critical,” argues Shirazi. Many Canadians have the luxury of not acknowledging racism, and they’ve done so to the extent that white denial has become its own narrative. Any attempt to ignore the problem—or treat its victims as “other”—undercuts any effort toward inclusion in the next 150 years.

This post has been updated to clarify details about a trial in London, Ont.