Think twice before tweeting about tragedies like the Toronto van attack 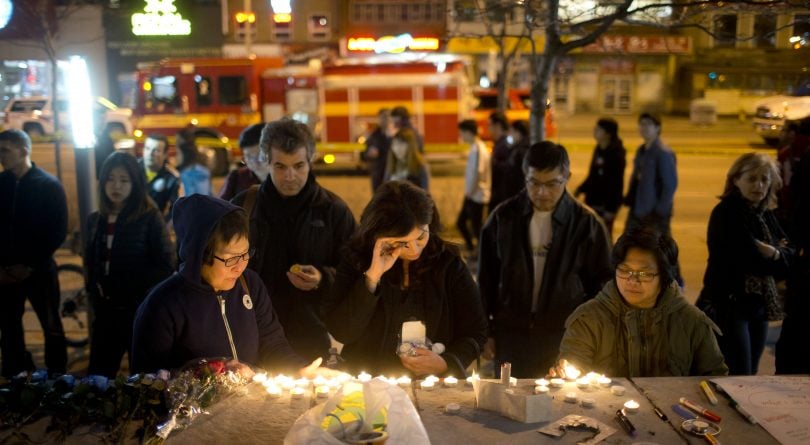 A woman weeps at a make-shift memorial set up on Yonge Street after Monday's tragedy where a man driving a van killed 10 pedestrians and injured another fifteen in Toronto on April 23, 2018. (Lucas Oleniuk/Toronto Star via Getty Images)

TORONTO — Think before you post, social media experts say after an uproar emerged over messages that expressed sorrow over Toronto’s deadly van tragedy while also appearing to promote shoes and hot yoga.

Social media users were quick to criticize Moksha Yoga Bloor West when it posted a photo of the man accused in the killings on Facebook and Instagram on Tuesday with the words “Alek is our mirror” and encouraging “the practice of compassion.”

People voiced their anger after a Toronto yoga studio, Moksha Yoga Bloor West, posted a picture of the Toronto attack suspect on their Facebook page and said he is a “mirror.” (Facebook)

Alek Minassian faces 10 first-degree murder charges and 13 attempted murder charges for allegedly driving a van down a Toronto street and sidewalk on a killing rampage. More charges were expected Friday.

The yoga studio’s director Don Christensen says Instagram and Facebook removed the message without his knowledge after an onslaught of criticism. He apologized on Facebook on Wednesday, saying his timing was off and that he failed to consider the impact.

Christensen adds in an interview Friday that the post was not meant as a promotion.

“I issued a call for compassion. In no way was I telling people how to grieve and I’m sorry this hurt people,” Christensen says. “The practice of compassion is what helped me when I lost family members to murder.”

Meanwhile, the Instagram feed for fashion blogger Amber Desilets, under the moniker canadianfashionista1, came under fire for promoting shoes Monday while also mentioning the tragedy earlier that day.

“I hummed and hawed about sharing tonight’s blog post, but in case you’re looking for an escape from sadness, I’m sharing my top wearable trends for spring, including these fabulous new kicks from my friends at @skechers.canada that can be found at @dswcanada #ad #skechers,” it read.

Desilets says she’s “mortified” by how it was received, and realizes now that “it wasn’t a good idea.”

She says that Skechers scheduled the post a month ago and that when it came time to mention shoes, she felt compelled to also address the tragedy.

“I have a lot of friends and family that live in the area and it was devastating, so I wanted to address it. Never did I want to make money or anything off a tragedy, obviously. I think it just came off wrong. I probably shouldn’t have mentioned it at all.”

She says Skechers saw the post once it went live and says nothing. They didn’t ask her to remove reference to the brand until the backlash emerged the next day.

“We live and learn. I can only move forward and I’m sorry that I offended people,” Desilets says.

Brands love working with influencers for their authenticity and genuine passion, but it’s clear that can sometimes lead to problems, says Jonathan Davids of the media company Influicity, which connects big brands with online tastemakers.

“There’s always a fine balance between giving creative freedom and allowing influencers to shine and be in their own spotlight versus ensuring that they’re being brand-safe,” says Davids.

Influencers would be better off to separate branded posts from those containing personal comments, he suggests.

Speaking about a tragedy with tact can be harder to do online than in person, she adds, and society has not yet adapted to this relatively new way of communicating.

Before social media, people would chat over the dinner table, or around the proverbial water cooler.

“It’s a normal human thing for everyone to just say the predictable thing: ‘Oh, it’s so sad,’ ‘Oh, I was just there last week,”‘ says Rini, Canada research chair in philosophy of moral and social cognition.

“That’s normal and healthy for people to try to process this. But then once you have a megaphone and you forget that what you’re doing is actually shouting to the entire world, things that are normal and healthy for us to have in small group conversations, they sound kind of pompous when you broadcast them like that.”

It’s easy for average social media users to get confused about how big their potential audience really is, she adds.

“If you get noticed, then suddenly everyone does read it and the things that might have seemed appropriate to your community … they’re not appropriate to everyone. It seems trivializing and insensitive to make a tragedy about yoga to someone who doesn’t care much about yoga.”

Calgary-based blogger Ryan Massel says he was surprised to learn that his Toronto-based co-writer “liked” Desilets’ post on behalf of his site, immrfabulous.com. He says she had backed it without fully reading the post, a practice not uncommon in the tight-knit influencer community.

“We’re just cheerleaders of each other, we work in an industry where we’re all a team so we ‘like’ each other’s photos based on content. Some people won’t read the text of it,” he says.

But he does not approve of Desilets’ post and also worries about how these controversies will affect his industry’s reputation, fearing “it looks so bad for all of us.”

“People are already hard on us and thinking that we’ll do anything for money and we’re just there to shuck a buck,” he says.

Massel says he’s refrained from saying anything about the attack but he can see how a blogger might feel compelled to mention it, even if it doesn’t mesh with their image.

“I can’t agree with what (Desilets) did but what happens is we just want to share our content and when tragedy happens in the world we still have things that we’re putting out. And we put it out because we have good intentions, we want people to feel good in that moment,” he says.

Instead, she reminds social media users to always think about their audience.

“Imagine that somebody personally affected by this situation is going to read what you posted,” she advises.

“Think about what it would look like to see their face and how their voice would sound. How hurt would they be? Is it worth it?”