Here are the first named victims of the Toronto van attack

Anne Marie D'Amico, Dorothy Sewell and Chul Min Kang are among the 10 people who were killed 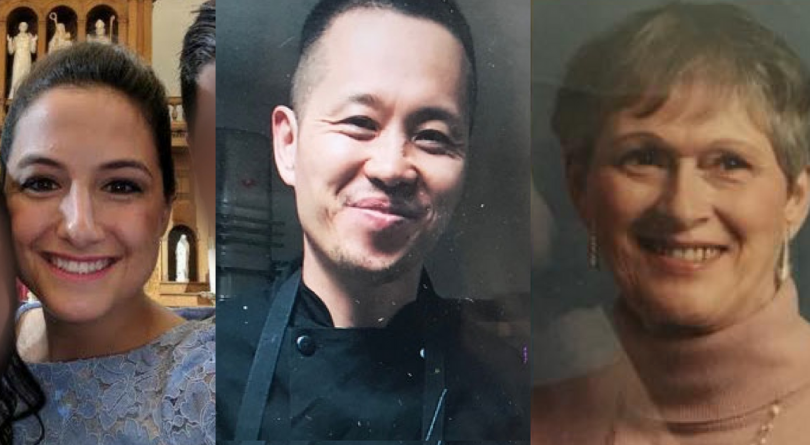 Some of the ten victims from the Toronto van attacks are Anne Marie D’Amico, Eddie Kang and Dorothy Sewell.

A single mother working for the school board, a father from Jordan visiting his son who’d only arrived last week and a chef working at an upscale restaurant are just some of the people who were killed when a van rampaged down a busy Yonge Street sidewalk on Monday afternoon.

The driver, Alek Minassian, a 25-year-old from Richmond Hill, Ont has been charged with 10 counts of first-degree murder and 13 counts of attempted murder. While police and Ontario’s coroner’s office have not identified any of the murdered victims, beyond saying they are “predominantly female,” their names are gradually being revealed by families and friends.

The city and Toronto police have set up hotlines to offer support to those affected by the incident, and for witnesses who may be able to help with the investigation.

Here’s what is known about those killed on Monday: 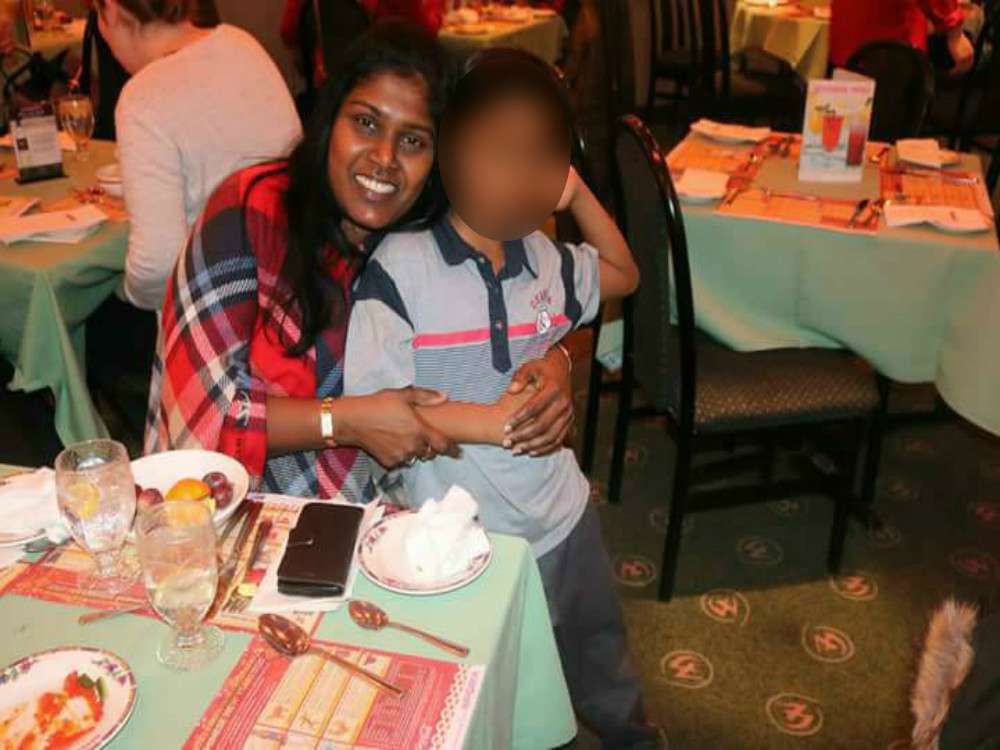 One of the victims was Renuka Amarasinghe, single mother to a seven-year-old son. (Facebook)

On Sunday night, a single mother was attending the Sri Lankan New Year celebration. The next day she was one the ten victims whose families were irrevocably changed.

The National Post confirmed that single mother, Renuka Amarasinghe, was one of the victims of Monday’s attack after contacting the Toronto Maha Vihara Buddhist Meditation Centre on Wednesday. The passing of Amarasinghe, a member of the Sri Lankan community, is especially difficult as she was raising a seven-year-old son.

The centre’s Lotus Youth Council Members has launched a GoFundMe to help raise money for him and setting up education costs.

Since 2015, she was involved in nutrition in different public schools across the Toronto District School Board, CTV News reports.

Amarasinghe’s passing was confirmed by the TDSB’s director of education, John Malloy and chair Robin Pilkey. She later posted her own condolences on Facebook.

“It was just confirmed that one of our TDSB staff members was killed on Monday in the tragic event,” Ford wrote. “Ms. Renuka Amarasinghe, a single mom from Sri Lanka. May she rest in peace. My condolences to her son, family, and colleagues.” 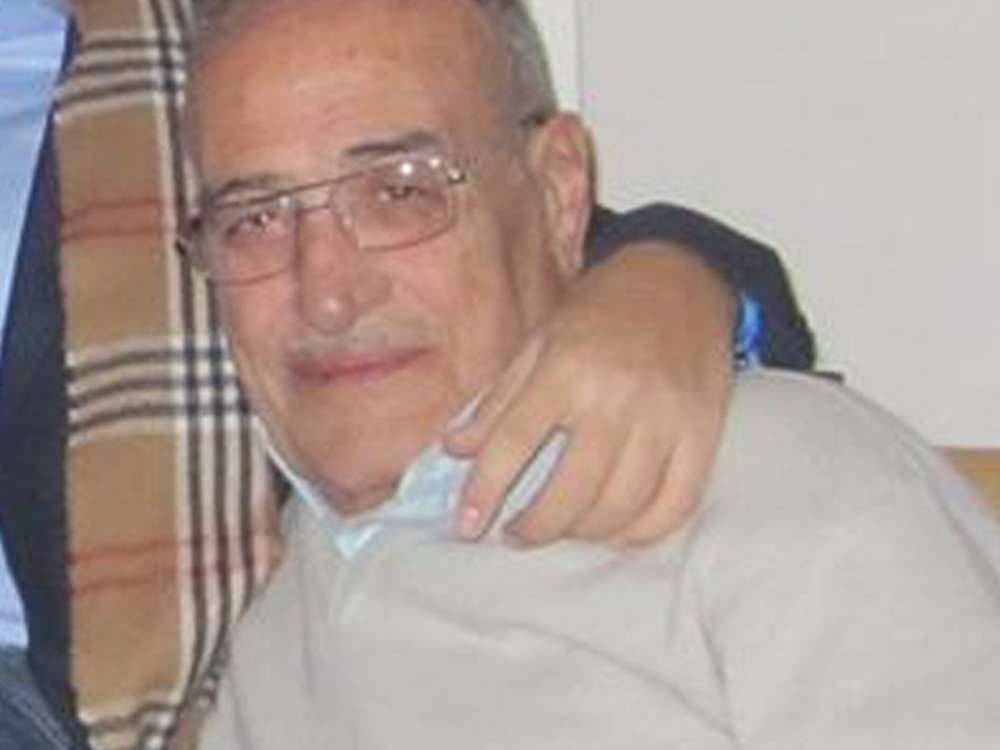 Munir Najjar was visiting Canada with his wife to visit his son. (Facebook)

Harry Malawi, the president of the Jordanian Canadian Society, confirmed that Jordanian Munir Abed Alnajjar was among the those killed on Monday.

Malawi said Alnajjar and his wife had just arrived in Toronto last week to visit his son Omar. Alnajjar had planned to be in Canada for about a month. A family friend told The Toronto Star that “Omar Najjar’s father, Munir, was killed in yesterday’s Toronto (incident), and the family wants to be alone at this point. We seek prayers for his father and for all the injured and killed.”

#Breaking: The owner of Copacabana restaurant has confirmed that chef Chul Min “Eddie” Kang was one of the victims killed in Monday’s van rampage. “His smile would always light up the room,” said Michael Rudan. https://t.co/277djVuDJk pic.twitter.com/rulQV7siYQ

Chul Min Kang, who goes by the name “Eddie,” was a chef at Copacabana for the past six years. He was confirmed by friends to be one of the victims. One of his friends told Global News that he had a “passion for cooking” and life in general.

Michael Rudan, the owner of the restaurant confirmed the death to the Toronto Star saying, he was “hardworking, loyal and salt of the earth.” Rudan said Kang’s smile could light up a room and would cook for Rudan’s children. Before his passing, Kang was also an executive of the new restaurant that is opening below the Copacabana.

“He created this cheesecake in the new menu. It had something Peruvian in it … it was great. He made black cod too that was amazing,” Rudan said. “He was an amazing chef. But he was an even more amazing person.”

Dorothy Sewell, 80, was confirmed to be one of the victims by her grandson, Elwood Delaney.

Delaney released a statement to CityNews saying Dorothy was, “the best grandmother anyone could have asked for. Almost had as much love for the Blue Jays and Leafs as she did for her family.” Delaney posted about his grandmother in a Facebook post adding that, “You will always be loved and your love for sports will always be with me while I cheer with you. Go Toronto Go. Love you Nan.”

Her grandson even addressed Minassian, though not by name, “Thanks to you I had to tell my 3 children and my wife that cause of you they will no longer get to talk to Nan on there [sic] birthdays or Christmas.”

Anne Marie D’Amico, 30, was an employee at Invesco, a U.S.-based investment management firm with offices at Yonge and Park Home Avenue.

She had also worked with Tennis Canada and the Badminton & Racquet Club of Toronto. She was an alumna of Ryerson’s Ted Rogers School of Management.

According to Tennis Canada, D’Amico’s grandmother, mother, father and brother were all volunteers with Rogers Cup and “the D’Amico family have provided a combined 84 years of incredible service for the event.” Tennis Canada also plans to honour her memory and service to the Rogers Cup at this summer’s event. 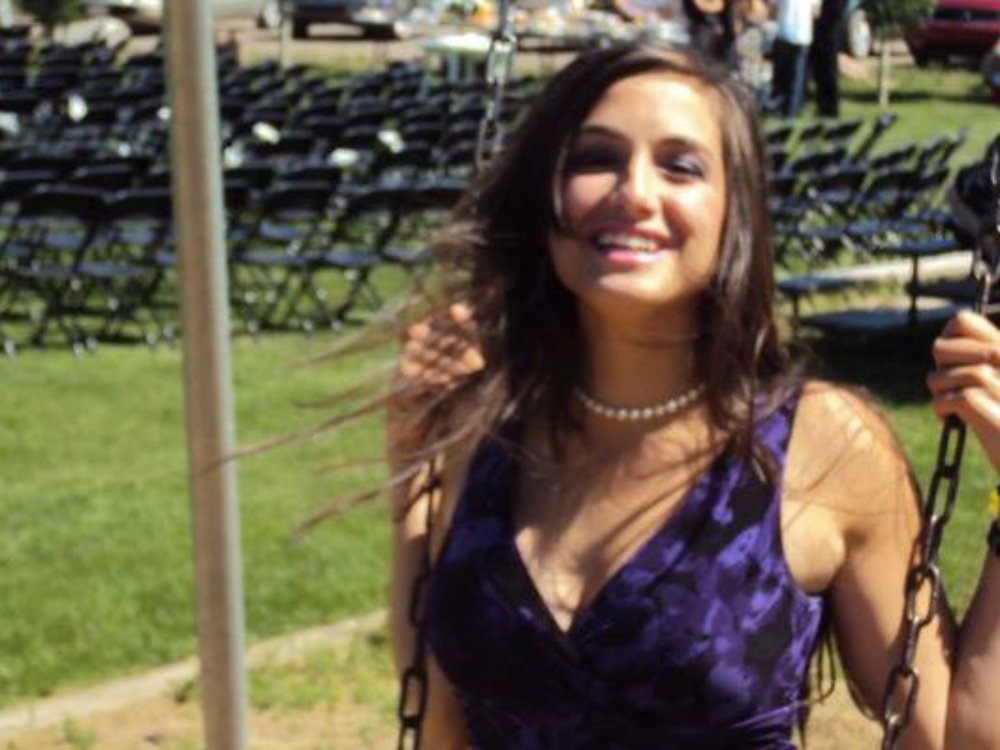 “Our thoughts and prayers are with Anne Marie’s family and with all those impacted by this tragic event,” Gavin Ziv, vice president of professional events at Tennis Canada, said in a statement.

CityNews sports reporter Danielle Michaud said she knew D’Amico from Tennis Canada. She took to Twitter, saying “My @TennisCanada family lost one of its brightest lights & biggest hearts in Anne Marie D’Amico. I’m devastated for her family … a big, loving, tight-knit group. No words for this tragedy.”

Seneca sent a letter to students on Tuesday, notifying them that a female student died in the attack, but the school did not name her.

“On behalf of all of us, I want to extend our deepest sympathies to her family and friends,” the letter reads. “Our condolences as well go to the families and friends of all those who lost their lives yesterday. I also want to pay special tribute to the police, fire, EMS and hospital personnel who responded with such courage and compassion to this unprecedented assault on our city.”

A South Korean news agency says two Korean nationals were among the 10 people killed. The Yonhap News Agency is citing government officials as saying three others are unaccounted for.

Identifying the other victims could take days

Unfortunately for the victim’s families, Ontario’s chief coroner said that the large number of people killed and the circumstances surrounding their deaths have made it difficult to quickly identify the victims.

Dr. Dirk Huyer said that they wanted to be extra-careful to avoid any possible confusion, such as earlier this month when officials mixed up the identities of two of the players following the Humboldt Broncos hockey team bus crash.

“Frankly, it takes time to get records and it takes time to meet families and that’s not a resource issue,” he said. The forensic team is working with the families to comb through dental records, fingerprint and even, DNA comparisons, Huyer said. He added that additional support had been called in to help.

Some of the names of the victims who survived were revealed on Tuesday as court documents identified the 13 victims of attempted murder:

Of the eight remaining patients at Sunnybrook Hospital, five remain in critical condition and three are in serious condition.

One of the victims in critical condition at Sunnybrook Hosptial is Toronto nurse Amaresh Tesfamariam, according to her nephew, Menab Tesfamariam. He started a GoFundMe page for his aunt saying that his elderly aunt had suffered spinal injuries and now needs financial help since she lives on her own. 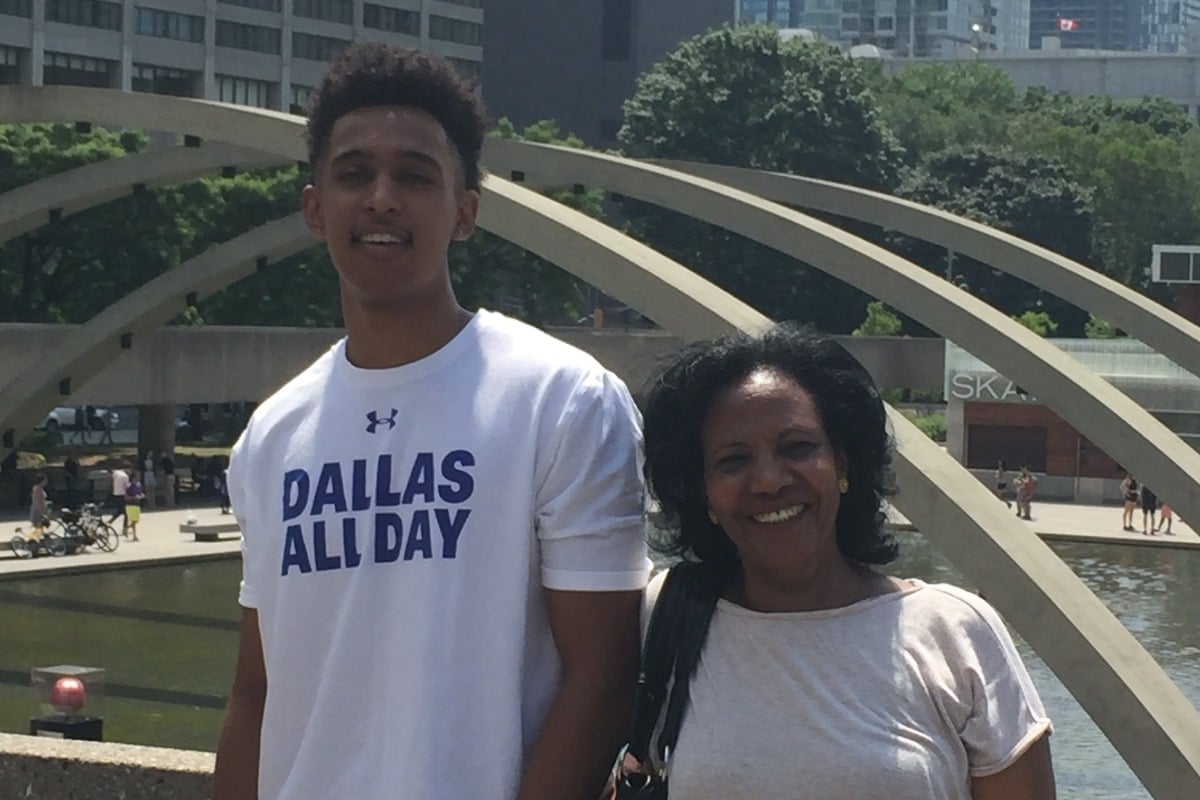 Amaresh Tesfamariam (right) one of the victims still in critical condition at Sunnybrook hospital (GoFundMe).

“It’s just really hard to see that something like this would happen to her, for someone who’s so happy and joyous,” he said. “She will not be able to work for a quite long period of time as were [sic] being told right now,” he wrote.

A Muslim-Canadian non-profit group called DawaNet, which helped raise more than $800,000 for the victims and their families of last year’s mosque shooting in Quebec, has launched a GoFundMe page for the victims of the Toronto incident. It had raised more than $144,000 by Wednesday morning. 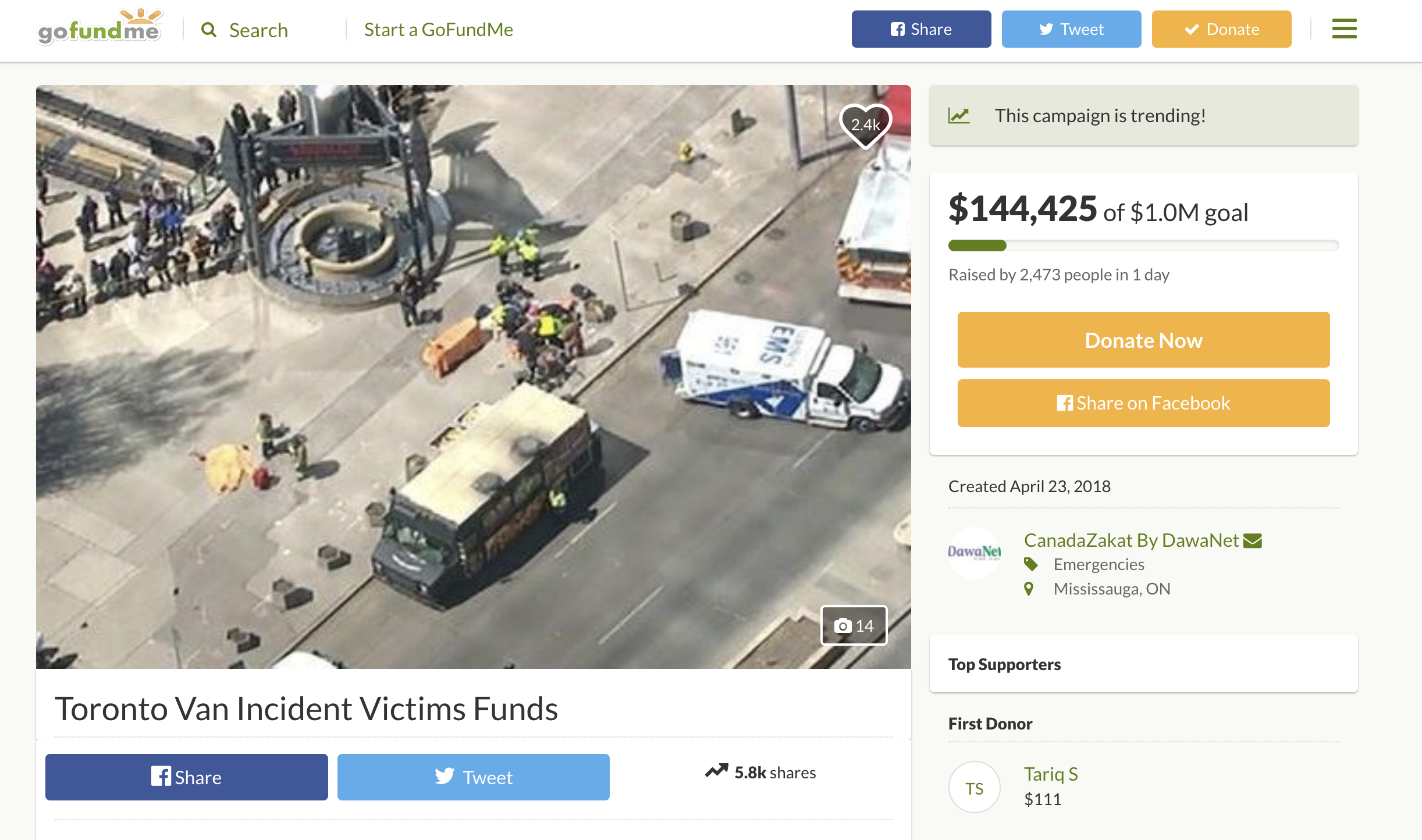 A screenshot of the fund set up by Canada Zakat for the funeral expenses for the victims of the Toronto van attack. (GoFundMe)

With files from 680 News, the Canadian Press and Diana Pereira