After a 14-2 beating at the hands of the Kansas City Royals, Canada's team needs to win three straight to reach the World Series 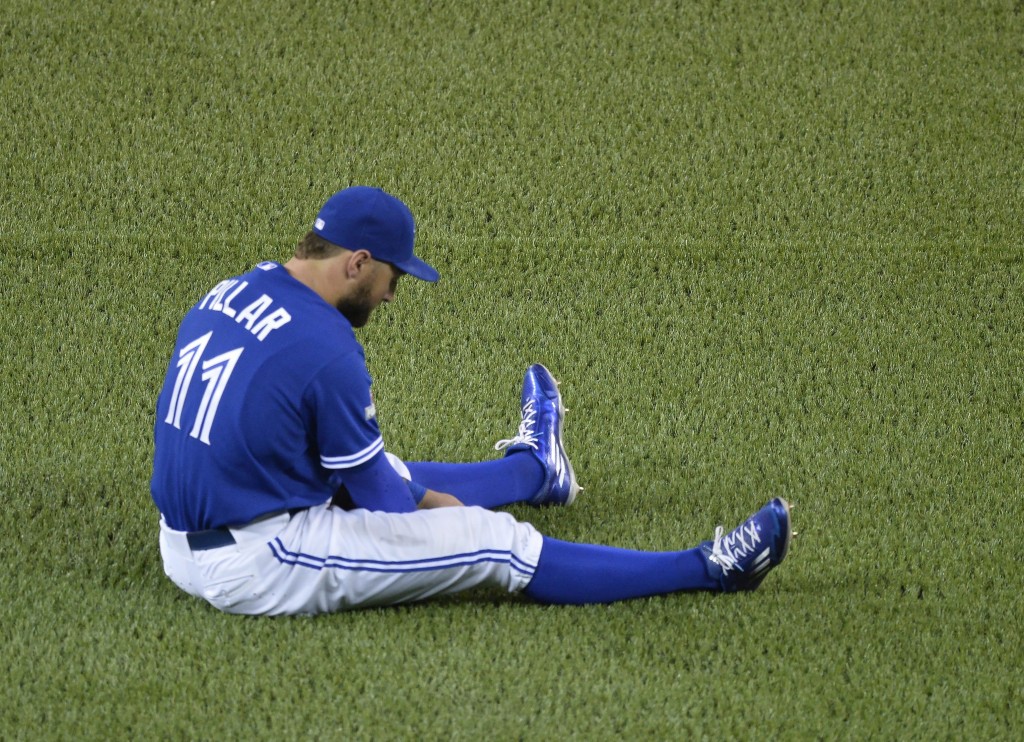 Blue Jays manager John Gibbons summed it up best. “It was ugly today, no doubt about that,” he told reporters after the drubbing. “That’s all I can say.”

After pulling within one game of the Kansas City Royals with an election-night victory on Monday, the Jays now find themselves on the brink of playoff elimination after an embarrassing 14-2 blowout on Tuesday—a loss so lopsided that a utility infielder, Cliff Pennington, was called on to pitch in the ninth inning.

Down 3-1 in the best-of-seven American League Championship, Canada’s baseball team must now win three straight to reach the World Series. One more loss and #cometogether will become #seeyouatspringtraining. (Or #leavetogether, as thousands of fans did well before the final pitch at Rogers Centre.)

When his club needed him most, knuckleballer R.A. Dickey responded with one of the most abysmal starts of his career, firing an opening-pitch strike but imploding from there. The Royals were up 2-0 after just four pitches (thanks to a Ben Zobrist home run to deep right) and 4-0 by the end of the first. When former Jays outfielder Alex Rios launched another round-tripper in the top of the second, the crowd was too demoralized to even boo their most despised alumnus.

A hit-batter and another walk spelled the end of Dickey’s very short day: 48 pitches, five runs, five outs. With his contract situation uncertain (Toronto holds a US$12-million option for next season, with a $1-million buyout), it’s possible that Dickey just tossed his last knuckleball as a Blue Jay. “You play this game long enough and you’re going to have outings like that,” the knuckler told a crush of cameras after the game. “The thing to do is to try to turn the page as quickly as possible. It just hurts a little bit worse that it was on this stage, so you’ve got to deal with that.”

Despite the hole Dickey dug, the Jays’ potent offence showed glimpses of a possible comeback. In the bottom of the third, a Josh Donaldson double and a José Bautista groundout pulled the Jays within three—and reignited a despondent crowd desperate to wave their white rally towels. But Royals pitching closed the door the rest of the way. All told, the Jays mustered only seven hits.

If there was something to celebrate amid the slaughter, it was Liam Hendriks, the team’s Aussie reliever. Dickey’s immediate replacement, he pitched one-hit ball over 4 1/3 innings, saving an already battered bullpen. “I just wanted to keep going,” Hendriks said. “I had the feel for my pitches and I was going out there and doing what I needed to do.”

The relievers who followed didn’t have quite the feel, unfortunately—and the rout was on. LaTroy Hawkins coughed up three runs without recording an out. Ryan Tepera gave up another four. By the time Cliff Pennington was summoned to the mound in the top of the ninth, reliever Mark Lowe had left runners on first and second; two hits later, two more Royals had touched home plate.

When the infielder-turned-emergency-pitcher finally recorded an out, a Zobrist pop-out in foul territory, the crowd erupted. When the scoreboard says 14-2, you find joy anywhere you can. (“I pitched all the way through college,” Pennington said after the game. “It’s not the major leagues or the postseason, but I had an idea what it was.”)

The Jays are now backed into the same dark corner they were in the first round of the playoffs: staring at elimination, needing three straight victories to stay alive in the postseason. Even after such a grotesque loss, players insist there’s no reason why history can’t repeat itself. “We’ve shown our ability to come back before,” said Russell Martin, the Jays’ Canadian catcher, and a vocal team leader. “I definitely think Kansas City is better than Texas, so it’s going to be a tougher battle, but it’s a challenge—and I’m up for the challenge. We still have another life. We still get to play tomorrow.”

Ironically enough, it was the Royals who found themselves in the same 3-1 hole 30 years ago, when they last met the Jays in the ALCS. Longtime fans still remember the sting: The Royals rebounded, sweeping the rest of the games on their way to a World Series title.

First pitch on Wednesday is at 4:07 p.m., with Marco Estrada on the hill. Win, and the Jays will fly to Kansas City for Game 6. Lose, and they will go their separate ways for the offseason. “We know what we have to do,” Donaldson said. “You have to be able to turn the page and go out there and play the way we’ve played all year, which is good defence, pitch well and hit better.”

Or, as Gibbons would say, not “ugly.”