Federal government scientists are bursting to discuss a lost decade. Ask them anything. 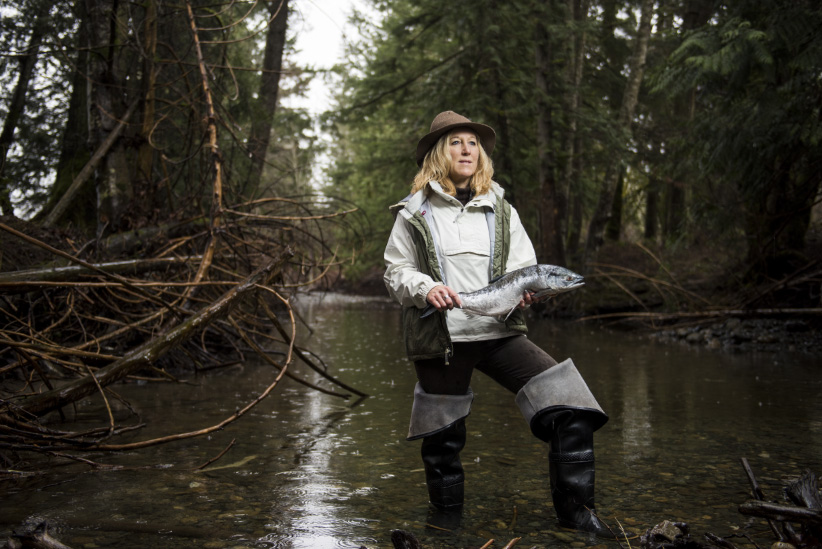 As a graduate student, Kristi Miller researched recruitment dynamics—changes in population abundance from year to year—in barnacles. They used barnacles to observe this phenomenon because they were abundant and easy to monitor. But they’re not exactly cuddly organisms, and talking about her work tended to act as a bit of a record-scratch sound effect in conversation. “When I would try to explain to friends and family what I was doing, they would look at me like, ‘Well, who cares about that? Why would anyone want to spend time and money on that?’ ” she says, laughing. As she progressed through her education—she completed a Ph.D. in biological sciences at Stanford University in 1992—Miller wanted to work on something people cared about. “I loved what I was doing, but I really wanted it to matter,” she says. That drew her to government science: she wanted to be involved with people who were making policy decisions, to have her research help shape something in the real world. She would, however, eventually become a poster child of the Conservative government’s “muzzling” of scientists.

Now, as head of the molecular genetics section at the Pacific Biological Station in Nanaimo, B.C., she works on developing novel technologies to track the health and condition of salmon. What she loves more than anything is knowing a tool she developed is being used to make decisions. She works long, intense hours because she loves her job, and that and her family—her husband of 25 years, a 22-year-old daughter and 20-year-old son—define the shape of her life.

In 2011, Miller published a paper in the high-profile journal Science on her discovery of a genomic signature in dwindling Fraser River sockeye salmon populations, which suggested that a viral infection was causing them to die off in large numbers before spawning. The journal flagged her paper as being of widespread interest, so she sought boilerplate approval from Fisheries and Oceans Canada (commonly known as DFO, for Department of Fisheries and Oceans) to do interviews. Journalists started calling, then tap-dancing anxiously as the embargo date on the study neared, but Miller was hamstrung, still waiting for permission to chat. Finally, a few days after the study came out—along with the initial rush of coverage—word came down through her department: there would be no approval to speak about what was considered a bad-news story. “It was actually really embarrassing, to be honest,” Miller says.

She was far from the only one who experienced this during the last several years of Stephen Harper’s government. If, say, you had a burning desire to know more about “rock snot”—which is best explained by its considerably less evocative identity as freshwater algae—you were out of luck, because the Canadian government scientist who was the pre-eminent expert on that particular natural wonder was under a gag order. Similarly, if you wanted to hear the author of Hotter Than Hell, a novel about a dystopian world ravaged by climate change, speak about the universe he’d conjured on the page, it wasn’t going to happen; he, too, was a government scientist told not to talk. Others attending a climate change conference in Montreal in 2012 were instructed to take the business cards of any journalists who wanted to talk to them and hand them over to media relations staff, who would arrange and chaperone interviews for researchers presumably too timorous and delicate to handle the task themselves. Still others were turned into sock puppets and helpfully handled scripts from which to answer questions.

What resulted from all of this shushing is what’s known on the Internet as “the Streisand effect,” so named for Barbra Streisand’s attempt to sue a photographer into removing a photo of her Malibu mansion from a thoroughly obscure website where he was documenting coastline erosion. As a direct result of the publicity around the lawsuit, the virtually buried photo of the singer’s home became a gleefully shared online pin-up. And so with Miller’s research and others, the effort to squelch coverage of science that likely would have had a short life in the spotlight instead spawned a new and much longer-legged series of stories about the Conservative government slapping muzzles on its own researchers.

By the 2015 federal election campaign, this was fertile ground for Justin Trudeau and the Liberals to stake out when they pledged in their platform to “value science and treat scientists with respect,” and ensure “that scientists are able to speak freely about their work.” Two days after the cabinet was sworn in, Navdeep Bains, the newly minted minister of innovation, science and economic development, announced that government scientists and experts were fully available to chat. The news was greeted in one department with the pop of a wine cork (non-alcoholic, these being work hours and responsible public servants and all), and in others with literal cheering.

The unmuzzling of government scientists has been a conspicuous and symbolically important part of the approach this government has aimed to project: transparent, progressive, fans of evidence-based policy-making and—perhaps most of all—Not Like The Last Guys. The implementation of the much-touted policy was slow to trickle down to ground level, though, and rolled out unevenly across departments.

But call a Canadian government scientist these days and you’re likely to get a swift response and a freewheeling conversation that has the feel of a long-held breath being exhaled. Rock snot, dystopian climate novels, sickly salmon—Canada could well set up a toll-free number that would let all these scientists release years of pent-up chatter about their work.

Critics, however, charged that the new government, particularly in the first half of last year, was basking in the glow of looking science-friendly while failing to ensure things had really changed. “Shortly after Canadians elected our government, we announced that federal scientists were once again free to speak about their work. This action followed years where scientists were silenced and government support for science flatlined,” Kirsty Duncan, minister for science, says in a statement. “We respect scientists and the important work they do, and remain committed to increasing openness and transparency. While we’re proud of this new approach, it is a culture shift that will take time to implement.” To that end, in May 2016, the government put out an updated communications policy spelling this out, her office said, adding, “Each department and agency is responsible for implementing this policy.”

Debi Daviau, president of the Professional Institute of the Public Service of Canada (PIPSC), the union that represents most ­­government scientists, says that some departments, including DFO, where Miller works, and Environment Canada, were proactive about this and explicitly told their employees and managers of the new approach soon after the announcement. But that didn’t happen everywhere. “Things were slow to get flowing,” she says. “Yes, the government changed its communications policy, but nobody seemed to know about it.” As of this fall, Daviau says more and more of their members were being clearly informed of their right to speak even if they were not designated spokespeople.

Last month, PIPSC triumphantly announced that it had negotiated with the government to include in its collective agreements a clause that protects this openness. “That was already the government’s policy, but now it’s enshrined in our collective agreement so no future government can take this away from us without a big fight,” Daviau says. She says all these measures are necessary to alleviate some of the “trauma, if you will” experienced by scientists over the last several years, and to restore “a sense of safety and security” that they can freely perform and discuss their research. “When a government is taking away their capacity to do their work, that’s a bigger attack to them than even not giving them raises or taking away their offices,” she says.

Back in 2010, Scott Dallimore, a Sidney, B.C.-based research scientist with the Geological Survey of Canada and Natural Resources Canada, published a paper about a flood in northern Canada, but permission for him to speak to journalists was delayed until their stories were long filed. This was puzzling, given the fact that the flood his work focused on had occurred 13,000 years ago. “I don’t think my muzzling was super severe, but I think it was entertaining and it was farcical in some ways,” he says. “It just didn’t make sense. The science I was doing would not be easily accessed by the media when it had been published in Nature, a prestigious journal.” To this day, he says he doesn’t know why the approval was so slow in coming, but things are different now. “The changes in the government of Canada that have happened have come down to the scientist level and they’re very encouraging,” he says. “They suggest to me the government is serious about improving the atmosphere for access to government science by the media, dissemination of our science results. I see no reason to be suspicious that they don’t have very good intent, and it has completely changed the atmosphere for the working environment.”

One of the things that made the muzzling so difficult for government scientists is how it was fundamentally at odds with the way they work, and with the culture of their discipline. As Miller explains it, science is to some degree inherently about debate—scientists may disagree on the interpretation of data, and as they gather evidence that supports or refutes hypotheses, what they understand changes over time. Given how scientific knowledge evolves and deepens with technology and the accumulation of evidence, for Miller, confidence and integrity rest on knowing your research is solid and you have interpreted it well. “Truth is how we understand it today,” she says. “What our truth is today has to be based on the weight of evidence we have now.” But debate—which she knows to simply be a part of science—tends to be frowned upon in government departments. “They want a hard line. They want to know this is the answer and there only is one viewpoint,” she says. “I think sometimes the knee-jerk reaction of a manager is to pick the side of the most convenient truth.”

Much robust research goes on in government departments, Miller says, but if they’re not allowed to talk about their findings, they’re not on equal footing with researchers in universities and other institutions. “The public, they start trusting the government science less,” she says. “They don’t hear about it, so they start wondering, ‘Do they actually do anything? Do they actually do anything that matters to us?’ So you slowly erode the public trust and public support of the government-level science.”

Since the new government came in, Miller has done plenty of interviews—all with the instructions to just set up whatever conversations she likes and give the communications department a heads-up afterward—but they’ve all been about how politics affected scientists like her, not on the research that consumes her. “After I had done five or six or seven interviews on the lifting of the ban, I started asking, ‘Is anyone ever going to ask me what I’m doing, about the science?’ ” she says, laughing.

For the record: Miller’s program recently uncovered heart and skeletal muscle inflammation, a disease not previously known to be present in B.C. salmon. She has a big team working on this, with more papers coming out soon. And she’s happy to talk about it anytime—just ask.