Was Ottawa’s forced relocation of the Ahiarmiut people more than cultural genocide?

Decades after the federal government uprooted a group of Inuit, the Liberals apologized and agreed to a settlement. The Ahiarmiut will forgive—but they can't forget. 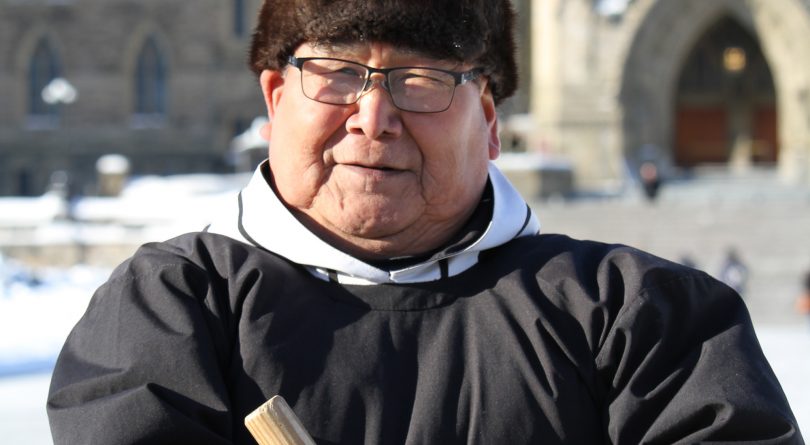 David Serkoak couldn’t believe what he was witnessing. An apology. It was 2005 and the premier of Newfoundland and Labrador at the time, Danny Williams, was saying sorry to Inuit who had been relocated in the 1950s from two northern communities, Nutak and Hebron, triumphantly calling the day a “symbol of reconciliation.” Serkoak isn’t a member of either community—he was there to perform as a ceremonial drum dancer. But the occasion brought him to tears, and he came away with a sense of determination. “I was watching a leader apologize to Inuit in person,” he says.

When he arrived home in Iqaluit, he told himself: “I’m going to see a day like that”—the Ahiarmiut people in Nunavut, his people, would one day receive an apology from the federal government. It was the renewed sense of mission he needed. In 1988, Serkoak had founded an organization called the Ahiarmiut Relocation Society that sought an apology, a financial settlement and a plaque acknowledging the near extermination of his people resulting from repeated relocations across what is now southwest Nunavut. But his group was running low on money. He feared he might have to call off his quest.

Still, Serkoak pressed on, and last summer Ottawa agreed to a $5-million settlement (including $100,000 for each of the 21 survivors of the relocations and $3,000 each for the 164 children of the relocated). And in late January, Carolyn Bennett, minister of Crown-Indigenous relations, delivered a long-awaited apology in Arviat, Nunavut. It was a moment of healing and reconciliation—one Canadians could use more of when it comes to their history with Indigenous people. “I only regret that so many Ahiarmiut will not be around to see the conclusion of this struggle,” Serkoak said during the ceremony. “We forgive but we will not forget. The country needs to know about—and learn from—past mistakes.”

Up until the 1940s, the Ahiarmiut were a group of inland Inuit, some of whom inhabited an area near Ennadai Lake, about 150 km north of Manitoba’s northern boundary and near the current eastern limit of the Northwest Territories. Their culture depended on the caribou herds that travelled the land; before the relocations, they faced occasional periods of starvation because of the Arctic’s tough conditions and the caribou’s varying migration patterns.

After the construction of a military radio station near their homeland in 1949, the Ahiarmiut and the federal employees who manned the tower began to trade with each other. Ottawa took notice, raising concern that the Ahiarmiut were starving and increasingly reliant on the station’s resources. “The people at the station were saying, ‘Leave them alone, this is part of their life cycle,’ ” says Steve Cooper, the Ahiarmiut’s lawyer.

The federal officials of the day believed they could help, and in the summer of 1950—without notice, explanation or consent—ordered roughly 67 Ahiarmiut, representing about eight families, to be relocated by plane to Nueltin Lake, about 100 km from their home. The intention, Cooper says, was to turn the group into commercial fishermen “for the benefit of a fishing company that never got off the ground.” Before their abrupt departure, an order was given to bulldoze and bury their homes and belongings; they took little more with them than the clothes on their backs. 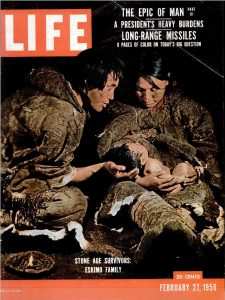 The cover of the February 27, 1956, issue of Life magazine. Mary Anowtalik with her husband and baby.

At Nueltin Lake, members of the group became so hungry that they resorted to eating their clothes and bark from trees, sucking on leather hides for traces of long-gone nutrients. “They were trying to breastfeed babies and blood was coming out of the nipple rather than milk because there just wasn’t anything available,” Cooper says, citing documented accounts from the time. Many of them didn’t make it. “The most powerful man in our group was the first to die,” says Serkoak.

Survivors, including Serkoak’s mother, who was pregnant with him at the time, walked back to their home in Ennadai after the lake froze. But the Ahiarmiut would be relocated four more times over the next 10 years: to Henik Lake, about 200 km away, in 1957; to Arviat in 1958; to Rankin Inlet in 1959 and to Whale Cove on Hudson Bay in 1960. By the following decade, most of the group had settled in Arviat for good.

Government records say Serkoak was born on Jan. 5, 1952, at Nueltin Lake. Now retired from a career as a school principal, he recalls from his home in Ottawa how his mother would tell him that wasn’t the day or place she gave birth to him—that he was born on an island somewhere near their homeland shortly after they made their way back. “You were born in the fall, when frost covered the surface,” she would say, likely in October.

RELATED: Canada’s MPs call for a residential-school apology—exposing a Church in crisis

The whole saga, says Serkoak, was like a horrific dream. Memories of chewing on meatless bones overshadow happier recollections of holding his mother’s hand or being carried on her back on long walks. When he began his work with the Ahiarmiut Relocation Society, compiling recollections and creating “a paper trail,” as he puts it, he inherited the bad dreams of his elders. One took place a year after the Ahiarmiut were moved to Henik Lake, where Ottawa gave them “starvation boxes” containing barely enough food to survive. Many left the area, but a few stayed.

A man named Ootek went mad. He shot Hallauk, a hunter, in the back of the head while he was jigging for fish at a nearby lake. Then he went after Hallauk’s wife, Kikkik, who was also Ootek’s half-sister. Kikkik somehow fought him off and killed Ootek by stabbing him with a knife. With her five children, the traumatized Kikkik set out on a three-day trek to a Hudson’s Bay Company post in Padlei. But with her youngest daughter on her back and two more on a sled behind her (her two eldest children were on foot), she soon judged that she wouldn’t make it to Padlei alive. In desperation, she wrapped the two girls from the sled in caribou hide and buried them in the snow for insulation. She and her other three kids reached the post, and the RCMP found the snowbound girls a day later: only one had survived. Kikkik was charged with the murder of Ootek, as well as causing the death of one daughter and neglecting the other. A headline from the time of the murder in the Globe and Mail read: “Violence brings move for band of Eskimos.” But later that year, Kikkik was acquitted of all charges. Elisapee Karetak, now 62 and a documentary filmmaker, and her sister Margaret—the one who was found alive in the snow—were at the apology. Karetak was about 15 months old when she was on Kikkik’s back that day. Her mother didn’t like to talk about what happened; Karetak didn’t learn about her people’s history until she was a teenager. But, she says, “I remember my mother’s love.”

These days, it is commonplace to call Canada’s treatment of Indigenous people cultural genocide. But some believe the case of the Ahiarmiut represents something worse. “The UN convention on genocide doesn’t require it to be a big group,” observes Rhoda Howard-Hassmann, a professor emeritus at Wilfrid Laurier University. “It just struck me that this was really an actual, physical genocide.” The relocations could be considered “genocide by attrition,” she adds, a term coined by U.S. sociologist Helen Fein, which doesn’t mean “rounding people up and murdering them directly, but deporting them, letting them starve and die of disease.”

Howard-Hassmann knows that proving intent on Ottawa’s part would be difficult. Still, she points to large-scale “deportations” like the ones involving minorities in the Soviet Union in the 1930s and ’40s, which scholars now recognize as genocide: “If you deport people and massive numbers of them starve to death, that is more than cultural genocide.”

In 2007, Cooper received a call from Serkoak asking for help. He knew of the Ahiarmiut from the works of author Farley Mowat—books like People of the Deer and The Desperate People. (Mowat would later be accused of exaggerating his involvement with the Ahiarmiut.) Cooper agreed to help and told Serkoak not to worry about the money for now: “Sometimes you take things on because it’s just a moral claim that needs to be pursued.” 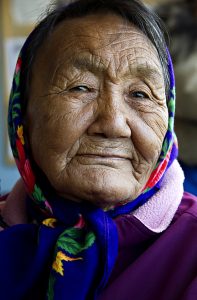 A year later, the Ahiarmiut filed their litigation. The Conservative government under Stephen Harper resolutely fought the case, Cooper says, but three months after the Liberals formed government in 2015, Ottawa agreed to settle. The apology was held in a community hall in Arviat. Survivors and their families filled the room, many of them in tears when Bennett said: “We are sorry. Mamiapugut.” Mary Anowtalik, the oldest of the 21 remaining survivors, was among them. At 17, she had appeared on the cover of a 1956 issue of Life magazine. She now lives in Arviat, where she rides an ATV and speaks on a smartphone. She was, says Serkoak, delighted by the apology.

As was he. Serkoak’s mother died in the early 2000s, and he retired early so he could teach his grandchildren how to hunt, dance and drum. Over the course of the litigation, he quit drinking. He finally had vindication for his years-long quest—and a chance to put his own nightmarish memories behind him. “To hear those words from the minister,” he says, “was almost like waking up.”