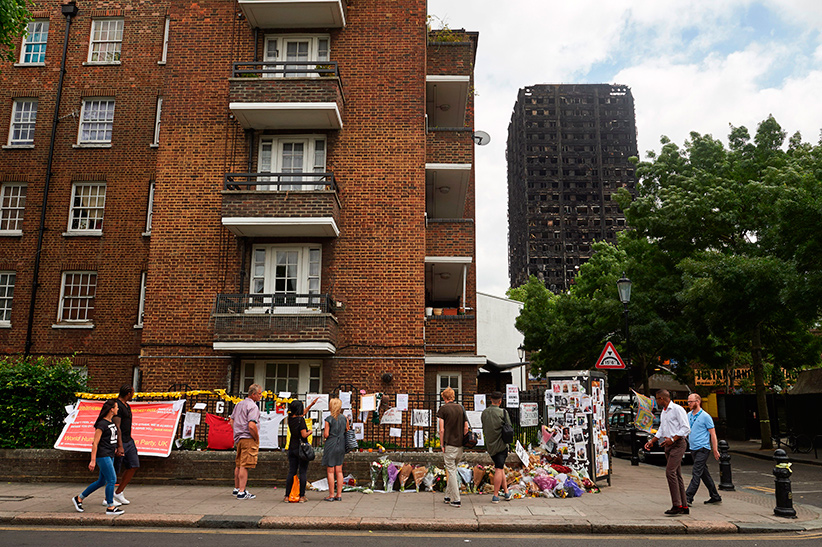 The charred remains of cladding are pictured on the outer walls of the burnt-out shell of the Grenfell Tower block in north Kensington, west London on June 22, 2017. (Niklas Halle’n/AFP/Getty Images)

The embers were still warm when news of last week’s Grenfell fire began to spread. There was immediate speculation about the role that cheap building cladding and a lack of alarms and sprinklers played in the deaths of 79 residents— a loss characterized as “corporate manslaughter” by Labour MP David Lammy. It’s clear that design and regulatory issues must be investigated, but there’s something else that helped spark the fire. Within hours, the Grenfell Action Group posted a blog underscoring another critical factor—the catastrophe was “inevitable” because previous resident warnings went unheard.

Systemic silencing of residents was a killer.

An old high school friend, Nina, who’d moved back to west London a few miles away from the scene, reached out to me. Amid the mourning, she says, the community is burdened with an additional worry: They fear those in power will continue to diminish the voices of Grenfell residents, and perhaps the value of the lives lost.

I want to offer reassurance to the contrary, but cannot. My childhood experiences growing up in social housing, along with my placemaking practice—focused on spatial design and social justice—have repeatedly proven that a person’s worth is often assessed by the market value of housing they can attain.

The voices of affluent residents who own property or lease high-priced condos are almost always privileged in urban developed projects, policy-making, and taxation systems. Like gender and class, housing plays a significant role in the ways individuals are seen and heard. And systemic silencing manifests across all aspects of housing provision—including right here in Canada.

Fundamentally, most of us understand the hurt that is experienced when our concerns are dismissed or we’re spoken over. But when it comes to systemic silencing, there’s also an element of power imbalances. Being silenced doesn’t simply imply that historically marginalized groups are unable to speak or voice their concerns; it is defined by the extent to which their insights or concerns are taken seriously and integrated in the decision-making processes that impact their day-to-day lives.

Considerable feminist research has been done to define this form of discrimination, including a study by the Okanagan Urban Aboriginal Health Research Collective, which considers colonization and explores the ways attire and health insurance status can impact whether Indigenous women’s concerns are heard. Women in this, and other similar international studies, reported feeling “inferior” and “stupid” when raising health care concerns.

Some social housing residents, like the Grenfell Action group, feel a sense of agency. However, many others experience a similar sense of belittlement as the Indigenous women in this study when confronted with systemic silencing. We should also be mindful that people don’t wholly exist in states of being inferior or powerless; despite systemic discrimination, marginalized people possess multiple forms of power.

As a kid growing up in Toronto Community Housing, I marvelled at the ways residents of my social housing community were interpersonally vocal yet systemically silenced. Neighbours would loudly call their children inside when the streetlights came on or commiserate about a lack of employment opportunities on the front stoop. But when it mattered most—like when the school streamlined their children into remedial classes, or when the superintendent refused to repair the perpetually broken elevator—you would barely hear a whisper of protest.

Sure, there were a handful of residents like my friend Anna’s mother who always pushed back; if the building wasn’t maintained she’d march right in the management office with hot pink rollers in her hair and “tell everyone about themselves.” But for the most part, residents kept their heads down and made the best out of substandard housing conditions.

Even after my mother entered her profession and moved us out of social housing, I struggled with this dissonance. It was, and still is, difficult for me to come to terms with the ways otherwise brilliant and powerful people are silenced within systems responsible for contributing to their well-being.

“Over the past decade I’ve found that social housing and shelter residents are constantly judged—perceived as unintelligent, unethical, and lazy,” says Cheryl Zaw, a housing advocate and executive director of the Inuvik Youth Centre. “This results in them not being heard when reporting faulty smoke detectors, sexual harassment, and being denied housing because of their Indigenous identity.”

Much like other forms of discrimination, housing discrimination prevents people within a historically marginalized group from being viewed as individuals with trustworthy and valuable contributions. Consequently, complaints or insights shared by social housing residents are sometimes distorted and minimized by listeners, often unaware of their implicit biases.

While everyone has implicit biases, the ones linked to housing discrimination are especially oppressive because they create a barrier in people accessing a necessity and human entitlement—shelter. 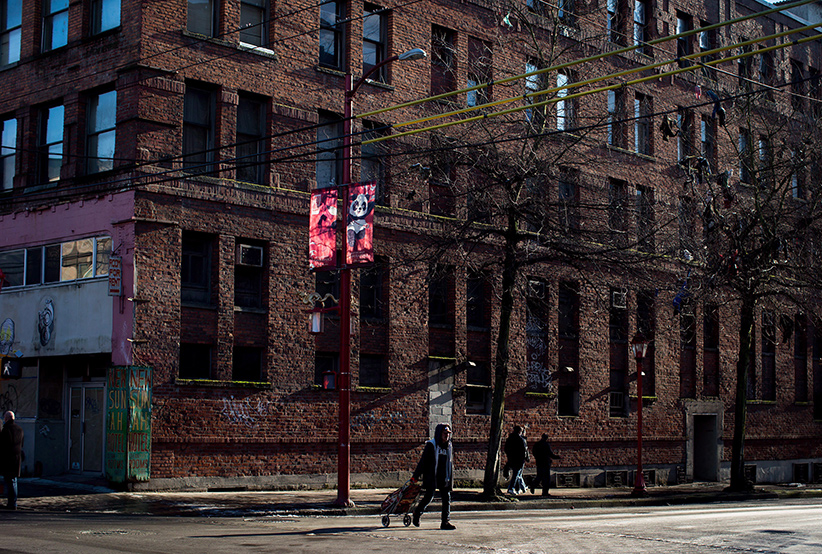 A man pulling a cart crosses a street in Chinatown, in Vancouver, B.C., on Tuesday December 6, 2016. (Darryl Dyck/CP)

Systemic silencing often hides these barriers, but the sting is sharply felt by people on the local level. Will Prosper, a Montreal-based documentarian and human rights activist, can attest to this. He grew up in Montreal North, which is part of the poorest riding in Canada. The community is largely comprised of Haitian, French-speaking residents systematically excluded from the more desirable, co-op housing neighbourhoods, largely occupied by people of European descent.

Each year, Will co-leads Hoodstock—a well-respected event that celebrates and mobilizes social housing residents. Will has witnessed complex intersections of systemic silencing in social housing communities: “Most people would never guess that Montreal North has so many housing vulnerabilities like poverty, being in a food desert, and not having access to affordable WiFi,” he says. “In addition to race and class, these struggles are ignored because of language; despite being a bilingual country, national housing conversations that happen in English seldom include examples from Francophone Canada.”

Yuly Chan, a grassroots organizer working in Vancouver, also exemplifies the commitment that’s required to break silences. For the past several years, Yuly and the Chinatown Action Group have worked to create space for more complete conversations about the redevelopment of Vancouver’s Chinatown. They’re concerned that gentrification has led to the displacement of Chinese residents—the same residents whose culture and hard labour created the community’s desirability. Moreover, residents who have been left behind no longer have access to necessities like affordable grocery stores, long-time physicians, and community networks.

Yuly and her group uncovered these disparities because they went knocking on the doors of social housing residents to hear their stories. Her voice sounds pained when describing circumstances faced by Chinese elders: “Many of the social housing residents we speak to are elders who spent their entire lives washing dishes, cleaning houses, or working in factories. Instead living in comfort, they’re isolated in tiny units, oftentimes without private kitchens or living areas.”

In reflecting on last week’s tragedy and subsequent conversations, I’m reminded of the urgency to proactively create space for residents’ voices, and encouraged by the deep listening housing advocates and professionals are doing across the country. It’s also true that in the absence of a single major incident, we can become complacent, ignoring the routine, quiet tragedies. The hush around these issues doesn’t mean that all is well—it means that social housing residents, and others living in sub-standard housing situations, are suffering in silence.

Jay Pitter is an author and placemaker focused on spatial design and social justice. She currently teaches an urban planning course at Ryerson University and is working on her second book Where We Live, which will be published by McClelland & Stewart at Penguin Random House Canada.