At this university, sex is a flagrant foul

When Brigham Young University announced that it was suspending sophomore forward Brandon Davies for the closing weeks of a dream season by its men’s basketball team, many sports fans must have had thoughts of a flamboyant 51-year-old Irish Catholic who may be the greatest athlete in the annals of the school. Davies was punished for violating the Utah university’s strict honour code, apparently by having sex out of wedlock with his girlfriend. BYU, in theory, expects all students to live a “chaste and virtuous life” according to the rules of the Church of Jesus Christ of Latter-day Saints—but Jim McMahon says it’s not so simple.

McMahon, whose colourful language and dress alone would have been enough to turn the honour code upside down, played at BYU for five years, starting out as the Cougars’ punter and going on to shred the record books as their quarterback. McMahon now recalls how BYU’s administration threw him out of the school with suspiciously convenient timing—the day after his last bowl game. “They said they had ‘just been informed’ that I was doing some things,” McMahon told Miami radio station WQAM last week. “You follow me around, you stake out my apartment. You don’t know what I’m doing? C’mon. They know what’s going on there.” The bon vivant Chicago Bears great, who re-enrolled at BYU last fall to pick up the handful of credits he needs to complete his degree, added that he “saw a lot of hypocrisy” at the university, saying of Davies that “some guys get caught, some guys don’t.”

That was 30 years ago, and McMahon, unlike Davies, was no homegrown star. All BYU undergraduates are bound by the honour code, which (unlike student-behaviour codes at most universities) sets standards for grooming, polite language and avoidance of addictive substances, including caffeinated beverages. The code applies on campus and off. But things are clearly a little different in practice for the few hundred non – Saints scattered among the school’s 34,000 students. Davies, a Mormon, grew up in Provo, home to BYU’s main campus, and led a local high school to two state titles. He is living the college experience under the unblinking gaze of his community, his church, and the administration of his university, all at once. 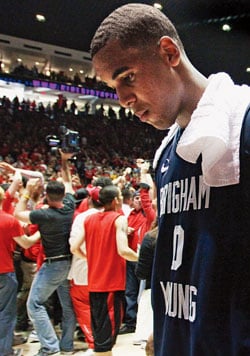 The loss of Davies represents a serious blow to the basketball Cougars’ chances in the NCAA Division I Championship—the annual orgy of gladiatorship and gambling more commonly known as March Madness, which begins on the 15th. The announcement of the suspension came hours after BYU was named America’s third-best team in weekly polls of reporters and NCAA coaches. The team is led by James “Jimmer” Fredette, a six-foot-two Mormon point guard from upstate New York who is expected to earn national player of the year honours. Fredette’s buffet of moves and devastating long-range shooting have made him one of the most cherished folk heroes in college basketball since the era of “Pistol Pete” Maravich. NBA star Kevin Durant of the Oklahoma City Thunder called him “the greatest scorer in the world!!” in an admiring January tweet.

The six-foot-eight Davies has been one of the few plus-sized passing targets for Fredette and is the team’s top rebounder. In the first game after his suspension, BYU promptly lost 82-64 at home to unranked New Mexico as he watched glumly, wearing street clothes at the end of the bench. Literally dozens of other tournament-eligible teams will have lost good players to injury in the final weeks before March Madness, but the combination of Fredette’s national following and a slightly prurient media angle has turned Davies’s loss into melodrama. Fredette is in his final year of college eligibility and gives BYU, which last made the Elite Eight stage in 1981, its best ever chance at a Final Four appearance.

The drama emphasizes the unique challenges faced by a private, church-run school with a strong countercultural commitment to old-fashioned conduct. (See also: Notre Dame.) BYU is meant to be, among other things, an advertisement for the worldly excellence of the Latter-day Saints faith, and athletics are an ever-growing part of that enterprise. Davies, unlike Jim McMahon, could not easily be written off or accommodated hypocritically as a “rebel” and outsider. His misstep confronted his school with a tough choice: compromise the fate of a team on the verge of a once-in-a-lifetime opportunity, or consent to a slight but humiliating erosion of its principles. Thousands, including many who have no particular love for the Mormon faith as such, will be cheering for the Cougars to elude the horns of the dilemma.