Where's Prince George? How the future king has been invisible

Can the bargain between the media and the royals over photos of Prince George hold, especially with the arrival of a princess? 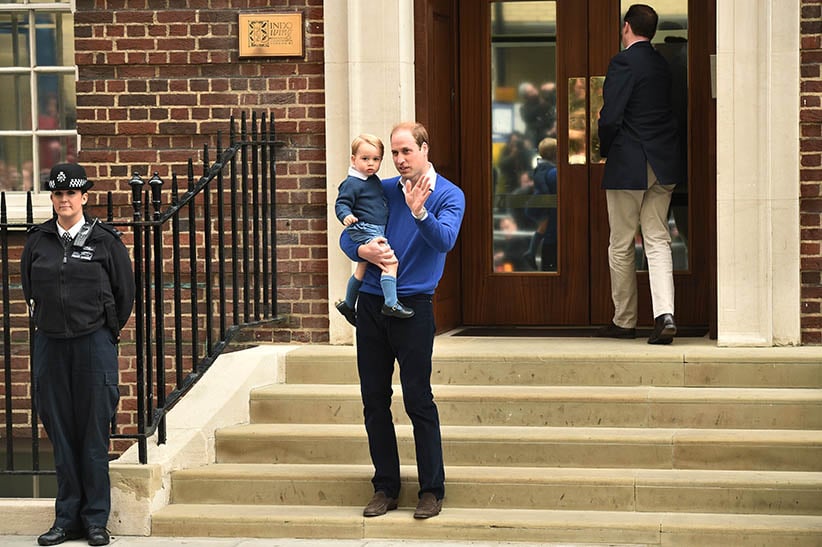 Prince George held by his father, Prince William, at the hospital to see his new sister on May 2, 2015 by Leon Neal/Afp/Getty Images

When Prince George, 21 months, came to see his new sister at St. Mary’s Hospital, it was only the third time he’d been seen at a royal event in Britain; the first was his own photo op as a newborn.

The last time the country saw Prince George at an officially sanctioned event in Britain, he was the star attraction. It was his christening in October 2013. The three-month-old was wearing a priceless lace-and-silk gown as he was held safely in his mother’s arms. Aside from a handful of photographs, chosen by the palace and released to the media, he has all but disappeared from public view in Britain.

Sure, Australians and New Zealanders saw lots of him when his parents went on a tour down under in April 2014. Images and videos were flashed around the world of him playing with other babies, excitedly meeting a bilby at a zoo and throwing presents on the ground. Bestowed with the nickname “Cheeks,” his grumpy face was everywhere. Then nowhere. In the last year, there have been only six approved images of George­—two sets of three photographs released for his birthday and Christmas.

“George is invisible,” says Judy Wade, a Hello! royal correspondent who spent more than 30 years covering the house of Windsor. “Okay, maybe William and Kate want him to grow up normally away from the spotlight, which is admirable, but it does not reduce the public demand for more George,” she says.

There has always been a bargain between royal parents and the mainstream press in Britain. The Windsors ensure the media gets regularly updated photos of the children, and in return the British press leave the children alone and, importantly, agree not to publish paparazzi images. A few rogue operators break the agreement every now and again, but by and large, the pact has held.

When William was George’s age, photographs were taken and released to a public hungry for new images of the young prince. The number of releases is roughly the same as today­. The photos are classic: William having his tummy tickled by his mother, Diana; William being held in his father’s arms while his mother entertains him with a toy rattle. They were taken by a small pool of professional photographers and cameramen, invited behind the gates of Kensington Palace to record birthdays and other key events. In addition, photographers were permitted to take photos of William as a growing baby and toddler when he travelled with his parents, even little trips to the Queen’s estates of Balmoral or Sandringham.

Today, however, even that highly restricted, controlled access is gone. Instead, William and Kate release a few carefully composed photos of George. Video is banned. The three pictures taken by Press Association photographer John Stillwell for George’s birthday last July show the one-year-old and his parents at the butterfly exhibition at the Natural History Museum in London. For Christmas, another three snaps were released. In each picture, George, then 17 months old, sits on stone steps at Kensington Palace. They were taken by  William’s private secretary, Ed Lane Fox.

With just six still images to choose from, news organizations unwilling to buy paparazzi shots have no choice but to recycle images over and over. When Majesty magazine—hardly a bastion of aggressive royal baby journalism—went to press in early April with its latest issue, the cover image of a seated George was one that the public has seen umpteen times before. “We always agreed to limit photos to official photocalls but William is taking that further and giving us almost nothing,” Wade explains. “What William wants, William gets.”

Wade thinks Prince William’s ultra-restrictive policy may stem from his own childhood. “I suppose he remembers when he had to walk into his nursery school and primary school through banks of snappers. He also saw fights in the streets of Alpine resorts with his police protection officers wrestling intrusive French paps to the ground.” Wade witnessed many of those instances, and recalls seeing how terrified both William and Harry were. “It’s no wonder William doesn’t want his own children exposed to this.”

Yet the couple’s restriction on official photos hasn’t stopped the lucrative offshore business of selling pictures of George taken by independent photographers and anyone with a smartphone, the so-called citizen paparazzi. Foreign publications, especially tabloids, have no qualms about running them. In mid-April, Australia’s New Idea magazine published photos of a heavily pregnant Kate taking George to a petting zoo near their country home in Norfolk. A few months earlier, the pages and website of the New York Daily News featured a swimsuit-clad William with the Middleton clan during a family vacation on the Caribbean island of Mustique. A photo of Kate with George and his nanny also ran. In the age of social media, those images were instantaneously shared around the world, including Britain.

Last October, the couple’s lawyers protested when a photographer was seen near Prince George in Battersea Park in London. They complained he’d placed the toddler “under surveillance and [was] monitoring his daily routines.” The photographer’s lawyers shot back, saying he didn’t breach media codes of practices, and had “not harassed or intimidated Prince George, his nanny or any other person.” Furthermore, he would continue taking photos when royals, including George, “were out in public, as was his right.”

The case sparked debate as to whether a line had indeed been crossed. After all, when royal-friendly Hello! splashed paparazzi images of Kate and baby George on an airport tarmac in the Caribbean in 2013, palace officials gave tacit approval to the images. That prompted accusations that the couple was cherry-picking which publication to criticize, and which to support—and what is deemed private or public.

There does seem to be evidence for this. In June 2014, British photographers were allowed to capture George showing off his nascent walking skills on the sidelines of a polo match in which William was playing. When those informal images turned up in every paper and newscast, there was no protest from the palace. 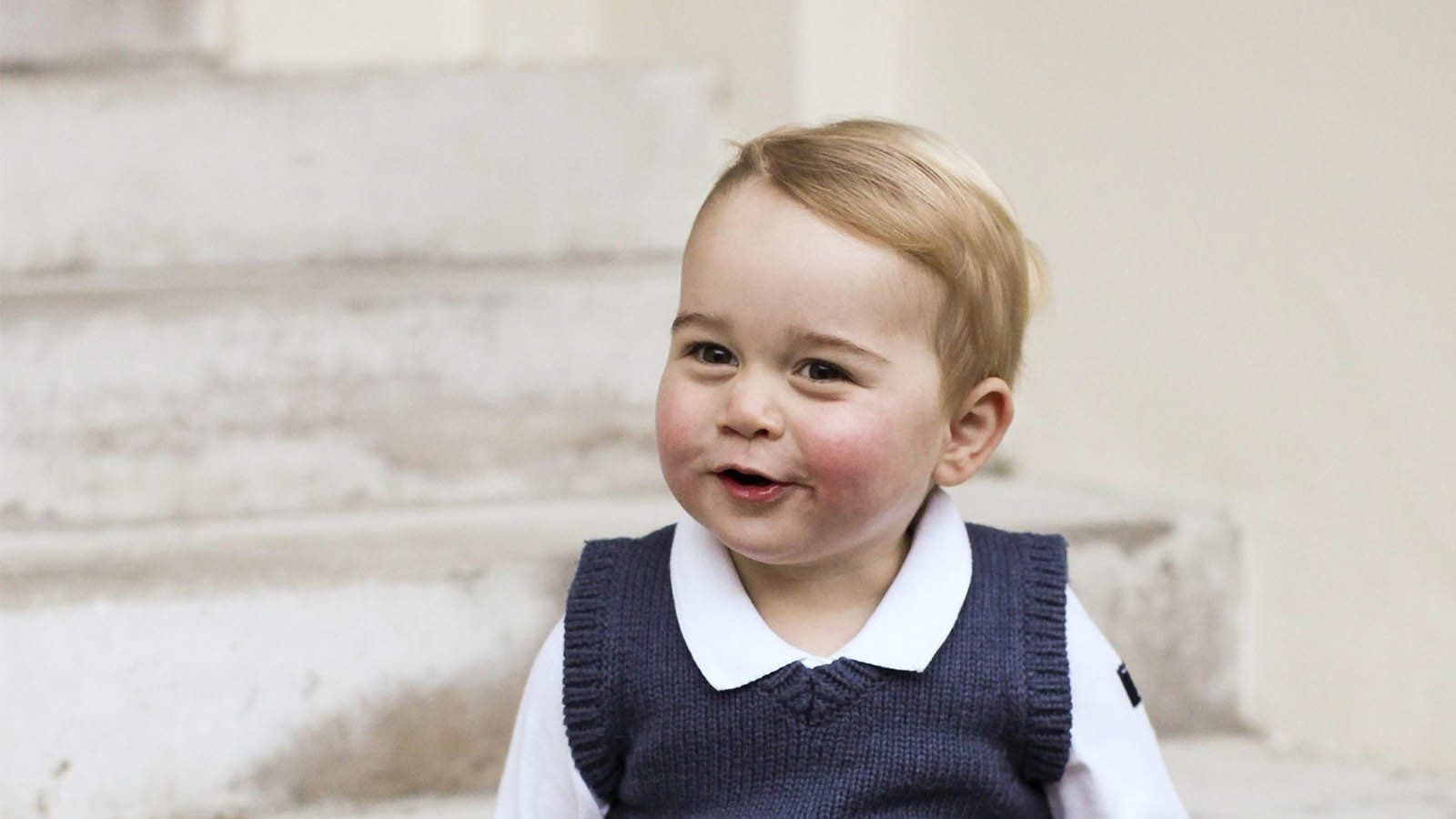 Royal parents elsewhere have a more relaxed attitude toward the press. In Sweden, Crown Princess Victoria and her husband regularly release both still and video images of their daughter, Estelle, born 17 months before George. And she’s slowly, carefully being introduced to the duties of being a future queen.

At 15 months old, she was carried by her mother to congratulate the men’s hockey team on winning the world championship. Wearing a Swedish jersey, Estelle peered inside the trophy cup while her mother crouched beside her.

That policy “doesn’t cut any ice with our royals,” Wade says. “They seem to regard the European royal families as not what they want to emulate.” For Wade and the rest of the royal press corps, fingers were crossed that they would see George at St. Mary’s Hospital when Kate has her second baby. There was precedent—31 years ago, Prince Charles brought William, then 2, to see his new brother, Harry.

While William did appear with George, the couple has made it clear they will bend, if not break royal rules, to suit their growing family. Right now, the bargain between palace and press is holding. But it is a deal under pressure.