'Who are you bubbling with?' How COVID-19 has changed language over the past year

From social distancing to variants of concern, pandemic-specific terms have become part of our everyday vernacular 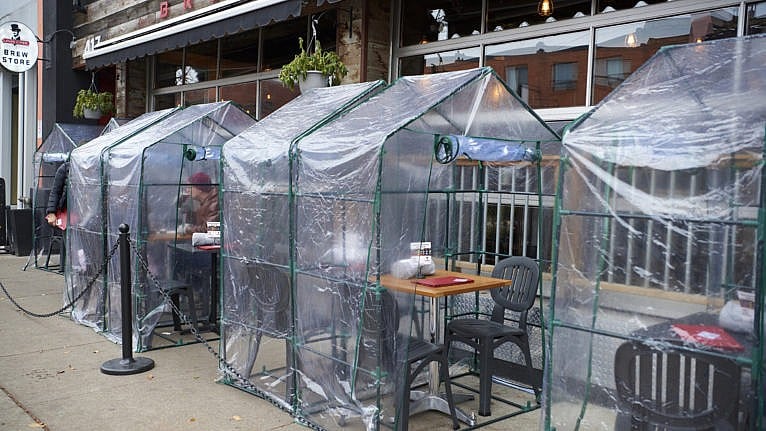 People sit outdoors for drinks under a clear plastic structure on The Danforth in Toronto on Oct. 31, 2020, as the city navigates a modified Stage 2 amid the ongoing COVD-19 pandemic. (Rachel Verbin/CP)

A year ago, our lexicon was suddenly filled with new terms like self-isolation, WFH (work from home) and PPE (personal protective equipment). In March 2020, every slot in the Oxford English Dictionary’s (OED) monthly list of top 20 key words was occupied by pandemic-linked words.

A year later, “COVID vocabulary still dominates the key words in our monitor corpus of English,” says Fiona McPherson, OED’s senior editor of new words, in an email interview from Germany. That corpus, which contains more than 11 billion words of web-based news content from 2017 to now, is updated every month.

The OED provided Maclean’s with pandemic terms in order of their “keyness,” meaning “words that are significantly more frequent in one part of the corpus than in the corpus as a whole,” explains McPherson. Words frequently used month after month (think “Canada” or “go” or “day”) are excluded.

The pandemic-related keywords from January show the attention devoted to vaccination efforts as well as the spread of those new variants of concern:

“Vaccination was No. 3 in January, after insurrection and rioter [used to describe the attack on the U.S. capital on Jan. 6],” explains McPherson.“In the early days, much of the focus was on our behaviour and how that had to change. We’ve seen a shift toward more scientific terminology as things progressed and thoughts turned to vaccines. And this has continued as the vaccines have become available and the whole process of having people vaccinated has gathered pace.”

Though the term COVID-19 was created in 2020 by the World Health Organization, other pandemic terminology isn’t new at all. “Efficacy” (the ability to produce a desired or intended result) dates back to 1527. The year 1644 marks the earliest usage of the specific pandemic-related meaning of “transmissible,” which means the ability to be passed on from one person or organism to another. “Variant,” a form or version of something that differs in some respect from other forms of the same thing or from a standard, is from 1849, though McPherson notes that the adjective is much older. One word that is notably newer than the others is “mRNA” (messenger RNA: the form of RNA in which genetic information transcribed from DNA as a sequence of bases is transferred to a ribosome), which was first mentioned in 1961.

RELATED: Researchers looking for mRNA were ridiculed by colleagues. Luckily, that didn’t stop them.

In 2020, new meanings were added to words already in the dictionary, including “bubble,” which now connotes a group consisting of a restricted number of people who have a close relationship or regular social contact and “face shield,” whose first usage dates back to the 1840s in Georgia when it likely referenced a sun protector, explained the OED update in March 2021.

The English language isn’t alone in creating new meanings and words during this pandemic. Germany is tracking some 1,200 pandemic words, ranging from some that need no translation, such as coronapanik and home-work-out, to impfvordrängler (someone illegally jumping ahead in the vaccine priority list) and spuckschutzscheibe (spitting protection shield), explained journalist Michael Knigge in a tweet.

What’s also of note is that there are some very specific regional variations of COVID terminology, such as the ways certain geographic areas refer to the immunization effort. In the United States, the ubiquitous phrase is “shots in the arm,” while in the United Kingdom, “jabs in the arm” is common phrasing. McPherson found variations within Britain itself: “Jag tends to be used by Scottish people, and jab by the rest of the U.K. (well, definitely England). It amused my in-laws who are English, but living in Scotland. The first thing that comes to their minds when they hear, ‘So-and-so got his jag today’ is a brand new Jaguar car.”

As for what’s next in the language, McPherson wonders, “Will it be all the things we have missed doing, or will some new or surprising vocabulary emerge?” She’s learned not to make any predictions: “If there’s one thing I know doing this job, don’t second-guess language.” And, if this year has taught us anything, it’s to not underestimate a pandemic. Even as vaccines roll out, it’s not time to put away the spuckschutzscheibe just yet.