Why country music needs to speak up about gun control

After the mass shooting at a Las Vegas country music festival, it’s time for the industry’s biggest stars to advocate for better gun control in the United States. 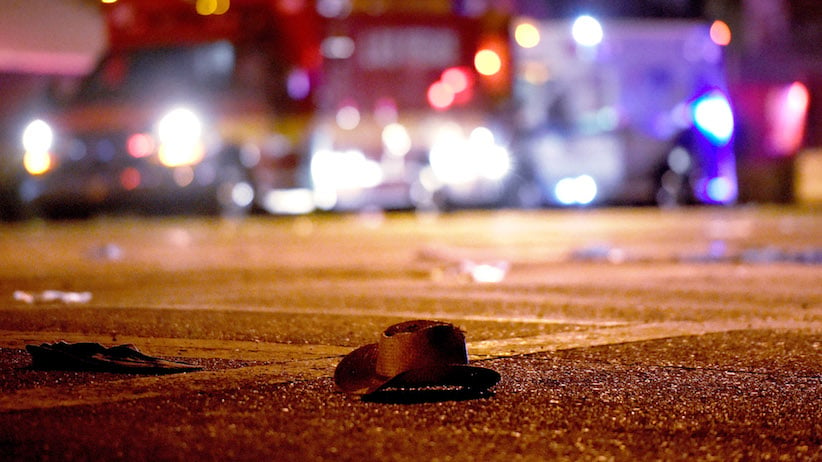 LAS VEGAS, NV – OCTOBER 02: A cowboy hat lays in the street after shots were fired near a country music festival on October 1, 2017 in Las Vegas, Nevada. A gunman has opened fire on a music festival in Las Vegas, leaving at least 20 people dead and more than 100 injured. Police have confirmed that one suspect has been shot. The investigation is ongoing. (Photo by David Becker/Getty Images)

On Saturday night, I filtered into a small hockey arena in Kelowna, B.C., with thousands of people who had driven in from all over to see country music star Miranda Lambert. The guy at security who checked my bag joked about being disappointed that I wasn’t trying to smuggle booze in. I made small talk with the women — and it was pretty much all women — crushed together in front of the merchandise table, eager to spend money they’d saved to pick up some official Lambert swag. The excitement was palpable — we’d come to see a show we’d been anticipating for months, to bask in the talent of an artist whose songs make our everyday lives a little bit better. A young woman I met there, 19-year-old Carson, cried with excitement when she saw Lambert take the stage. We sang every word to every song until the night ended, safely.

RELATED: How the Las Vegas shooting compares to the five most deadly gun rampages before it

That wouldn’t be the case for so many of my fellow country music fans in Las Vegas the very next night. I woke up to news Monday morning that at least 58 people were killed and more than 400 injured in one of the deadliest mass shootings in United States history. Police believe 64-year-old Stephen Paddock fired hundreds of rounds within minutes from his hotel room window, down into the crowd of attendees at Vegas’s Route 91 Harvest music festival Sunday night.

A 28-year-old woman from Alberta, Jessica Klymchuk, made the trip. So did Jordan McIldoon, 23, of Maple Ridge, B.C. They were killed in the spray of bullets that popped like fireworks as country music’s reigning entertainer of the year, Jason Aldean, finished his outdoor set in Vegas. What was supposed to be a carefree night in Vegas to celebrate country music became a total nightmare.

Since news of the attack broke out, big stars in the music world spoke out in favour of gun control, including Rihanna and Ariana Grande, whose own show in Manchester, England was the target of violence this spring. Aldean — who ran for cover once he realized his audience was under siege — shared a statement on Facebook. “My Thoughts and prayers go out to everyone involved tonight. It hurts my heart that this would happen to anyone who was just coming out to enjoy what should have been a fun night. #heartbroken #stopthehate.”

Most of the country music world’s reaction to the shooting has stopped well short of advocating gun control, echoing the same call for prayers and anti-hate hashtags. That’s understandable to a point — the nation is in shock and mourning. But while prayers are a welcome sentiment, the silence on weapons control in America speaks to the strength of the industry’s long and inextricable relationship with gun culture.

That relationship is tied up in country music’s deep roots in a certain traditional, conservative vision of America, but it’s also about money. Many country music stars, including Gretchen Wilson, Thomas Rhett and Lambert’s ex-husband, Blake Shelton, have affiliations with the National Rifle Association — the most powerful gun lobby in America. The affiliation helps the artists with their image and popularity in the pro-gun heartland of America, and in turn helps the NRA earn and maintain memberships, which gets them the ear of key lawmakers in Washington.

I’m not saying country musicians or fans should put away their guns for good — I believe there is such a thing as a responsible gun owner. But after the events of Sunday night, it’s time for country music’s biggest superstars to speak out against gun violence and advocate for better gun control — because, as research shows, gun control actually works. Nashville’s superstars have the devotion of so many Trump-supporting, gun-owning Americans — and that audience in Vegas was undoubtedly full of them. Country music’s stars have the perfect platform to help bridge the nation’s ideological divides.

RELATED: How America can change its relationship with guns

And yet, there is every indication that all we’ll get is calls for prayers and healing, and little else — and this doesn’t surprise me in the Trump era. The biggest artists of the genre have been frustratingly silent about mounting racial tensions in the United States. When very few country music stars, apart from Tim McGraw, Kip Moore and Maren Morris, spoke out against the race riots in Charlottesville this summer, Rolling Stone Country attempted to explain the fear: Artists and their labels are still terrified of getting “Dixie Chicked,” a reference to the total shunning of country trio The Dixie Chicks in 2003, after lead singer Natalie Maines said she was ashamed the Iraq-invading president of the United States at the time, George W. Bush, was from Texas. Country radio still has a lot of power in Nashville, despite the rise of music streaming sites.

One of Lambert’s biggest hits is “Gunpowder & Lead,” a song about a battered woman waiting by the door with a rifle until her husband comes home from jail so she can end her suffering for good. My new friend Carson loved it. I sang along too, to what I’ve long interpreted as an anti–domestic violence anthem.

I’m curious to know how Lambert will handle that song after what happened in Vegas. While she’s been less vocal about guns recently than she has in the past (Lambert used to perform with a microphone stand in the shape of a rifle), her official logo still features two crossed pistols. I hope she and her fellow country stars will take a minute to question the wide availability of guns in the United States.

“I still don’t know what to say,” Aldean said in his statement. He has a unique opportunity to change how many country music fans feel about gun laws. I want him to say that he never wants to play a show again where fans don’t feel safe. I want him, and all other major country artists, to distance themselves from a gun lobby that uses faulty logic to keep the market for firearms as open as possible. I want them to advocate for gun control.

A change of heart can happen. Even Texas-bred Caleb Keeter, a member of Josh Abbott Band, tweeted today: “I’ve been a proponent of the Second Amendment my entire life. Until the events of last night.”