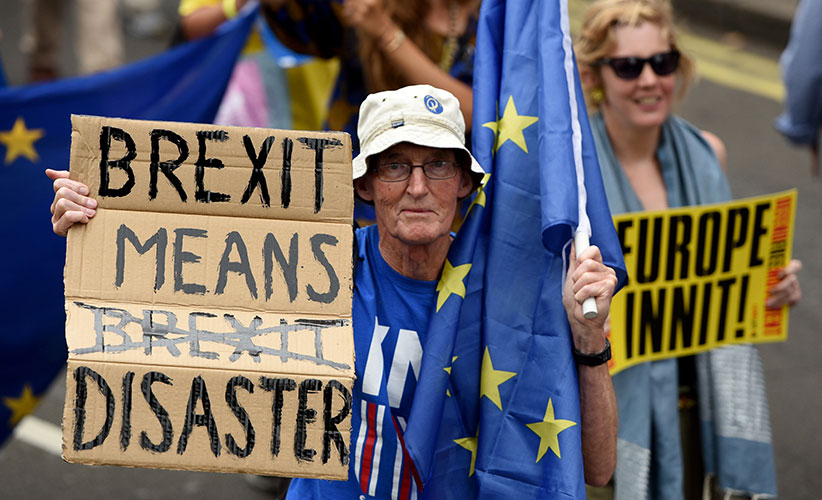 Thousands of people take to the streets in a series of ‘March for Europe’ rallies in protest against the referendum vote to leave the EU, in London, United Kingdom on Sept. 03, 2016. (Kate Green/Anadolu Agency/Getty Images)

As Trumpians trumpet, Brexiteers gloat and everyone else wrings their hands, Duncan Green’s How Change Happens suggests a refreshingly sane way of understanding the world. Billed as a “field manual for activists”—and politicians and civil servants too—it argues that progressive social change is still possible if those who pursue it keep calm and embrace complexity.

Green encourages a “power and systems approach” that sees every situation in terms of a constantly evolving system. Within each one, power works not just from top to bottom, but in all relationships among people and groups. Green’s last book, From Poverty to Power, took issue with the paternalism of big international initiatives such as Make Poverty History. Here, the Oxfam activist and London School of Economics professor argues that lasting change is driven less by laws and their enforcement than by societal norms, which are influenced by families, neighbourhoods, churches and football teams alike.

Change, he argues, is generated most often within a community, not without, and we can learn from “positive deviance,” whereby small, marginalized groups of people implement on their own what activists seek to impose.

Unlike most activists—and, indeed, most authors of “how to” books—Green welcomes ambiguity and promotes humility. Shortly after launching How Change Happens at the United Nations in Geneva, he spoke with Maclean’s contributor Mike Doherty about the rise of demagogues, why activists should think more like venture capitalists and how to dance with the system—rather than smashing it.

Q: In a field such as yours, how hard is it to sell people on the importance of uncertainty and ambiguity?

A: I think you’ve put your finger on a real challenge. To be effective at selling ideas, at being a lobbyist, influencing other people, you have to be very sure of yourself. [The book is asking activists] to live with a variety of cognitive dissonances, and one of them is, “I have to be sure of myself—in a conditional way, always being open to the possibility that I’m wrong.”

When you get talking to people in positions of power, you find that often their world view is framed either in terms of their disciplinary studies at university and/or the country where they first got interest in development. Economists who studied in the ’80s tend to have a pretty crude neoclassical view that’s just about freeing up prices and markets, and then you’ll get the growth and everybody benefits. And they’ll just repeat that, because if you’re a minister or a senior civil servant, you don’t have time to read anything anymore. You get very fixed in your views.

Everybody wants the magic formula, and this book is saying, “The magic formula is there is no magic formula.” Floundering around, learning by doing but also by failing, is not only good but inevitable. It’s asking a lot, emotionally, of people to work like this.

Q: Speaking of learning by failing, in the book you suggest that activist organizations “undertake multiple parallel experiments” and treat them as if they were lean start-ups. Should they be thinking more like venture capitalists?

A: Absolutely. Some kinds of activists are more willing to try stuff out, see if it works and think on their feet, but some of the people who are working on [change] find that very difficult: They’ve been schooled into thinking you have to come up with the perfect plan in advance. It has become a bit technocratic. In the end, that’s a blind alley—we have to get back to being able to think on our feet and react. I keep coming back to the phrase “Dance with the system”—not just march onwards no matter what happens.

Q: In Toronto, we had Rob Ford become mayor by hammering home basic ideas and slogans. Now Donald Trump has won in the U.S. by banging on in a similar way about “making America great again.” Are we at a time when those in power think their concept of change—or retrenchment—should be forced down people’s throats, and most voters are prepared to open up and say “ah”?

A: Fidel Castro once said, “Repetition is a revolutionary virtue.” [laughs] The Brexit campaign said, “Take back control,” and that’s what’s happened, I think, in the U.S. election—those are essentially messages of fear and of pulling back. [That strategy] is effective and seductive, but the implications are very bad, because it means people think there’s a single solution to complex problems, and the solution is often making an enemy of a group of people—pulling back and rejecting the other.

Q: Is resistance against the other inflamed by the internationalization of agreements, such as the Paris Agreement or EU regulation?

A: Yes, there’s a diversion between economic reality—integration, global village, everybody depending on everybody else—and cultural reality, which is people feeling invaded, undermined, threatened, wanting to have “stand-your-ground” legislation all over the place. It’s alarming because at the moment, the fear is outweighing the benefits, and that’s partially because the benefits have been so unequally distributed that lots of people don’t feel better off. They feel threatened, angry and despairing.

Q: Although Clinton adopted a “dance-with-the-system” model, Trump called for smashing the system. How can an activist combat such thinking?

A: What you don’t do is just say, “I’ve got all the ideas and all the knowledge, and listen to me.” Activists can get very preachy about things. It’s more about understanding people’s own experiences and tapping into them. The question, “When did you last listen to a poor person properly and try to understand what’s going on inside their own experience?” enables you to connect. Often we’re having an argument with something imaginary—a fixed idea of the “enemy” and the good. We need to get beyond that and actually develop a deep curiosity about people and systems and understand them better. Also we should look at how “the enemy”—people that you wouldn’t necessarily agree with—have done change and see whether there’s bits in there that we could learn from.

Q: Did the Remain campaign before the Brexit vote, or Clinton’s campaign in the States, not listen enough?

A: There’s a tendency for people who believe passionately in something to be so convinced of their rightness that if they just repeat themselves a lot at the person, that will convince them. And that hasn’t worked on things like immigration or trade deals.

The death of deference seems to be general at the moment, so everybody has to earn their reputation and trust all over again. You don’t just get it by virtue of being a professor or a politician or anybody else. There was a moment when one of the Brexit campaigners [Michael Gove] said, “The people of this country have had enough of experts.” That was alarming, in the sense of, if you’re not listening to experts, who are you listening to? People are saying, “I have a right to my opinion. Don’t just keep condescending, telling me what to think.” There’s something slightly liberating about that, but also it lends itself to being taken advantage of, because in come the demagogues.

Q: You make a very interesting statement in the book about how “good research may be more persuasive in closed political systems like China’s, Russia’s and Vietnam’s, where government technocrats and political leaders are more insulated from political pressures.” Could you elaborate a bit on the ramifications of this?

Q: Somewhere like Russia or China, decision-makers have far fewer constraints on acting than in more open systems. In Russia [in 2011], Oxfam did research that shows that the Russian disability rules were profoundly unfair: if you were disabled in Russia, you had to re-register every year, and it took up to six months to re-register, so people who lost limbs in Afghanistan had to prove that their leg hadn’t grown back. When we demonstrated this with good research, they said, “Fine. We’ll fix it.” In a democratic system, you have lots of different players, so sometimes it’s hard for evidence alone to do the trick. There are always pressures on decision-makers other than just what is right or what is wrong.

When we do work in places like China and Vietnam, research tends to be really effective as a way of getting change, whereas in more open places, mobilization and the creation of public pressure through the media often seem to be the things we try.

Q: Is that something that, strangely enough, a more open system could learn from a more closed system?

A: Well, lots of people in the open system are very determined to try and strengthen evidence-based policy. The classic example would be migration. You have a huge number of people who spend their time writing papers showing that migrants pay more to the country than they take out in benefits, and they say, “Why don’t you approve of migration? Why don’t you open up borders?” They’re not able to empathize with how people feel about migration. I see [activists] getting really angry that people won’t just do what the evidence tells them, and that’s not very helpful. You need to actually think why that is.

Q: In the book you mention the fact that 90 per cent of the world labour force is unorganized. How can a theory of change take into account the loss of full-time jobs and the difficulty of organizing people whose work is contingent?

A: The post-Second World War simple system of social democracy and organized labour has fragmented massively, but just because people aren’t organized in workplace trade unions doesn’t mean they aren’t in associations with other people—work-based, place-based, culture-based, sport-based, faith-based—there’s a bit of an old rainbow coalition argument. There’s no point in just hankering for the big trade unions of the 1950s or ’60s. [What with] the gig economy, you have to look at other ways in which people associate and see whether those can be part of the change process as well. I sound like a church nut, but look at the role of the churches in the civil rights movement in the States. People are brought together in other ways that can become drivers of change.

Q: Given your concept of a continually evolving system, change must always happen no matter what. Would you agree that activists essentially need to steer change rather than to make it happen out of thin air?

A: Yes. I’d go further than that, actually. In any system, there will be change happening without you. Until you have looked in depth at the system and found out where women in Egypt are not being cut through female genital mutilation, or where kids in Vietnam are not malnourished, or where hospitals in America are getting rid of the superbugs anyway—unless you have that level of curiosity about what’s going on without you, you will always come in with your great new recipe and just ignore what’s going on, and that will make you much less effective at what you’re trying to achieve.