Why the term 'death midwife' has actual midwives up in arms

As the taboo around death services wanes, a B.C. case shows how jealously guarded the birthing brand has become 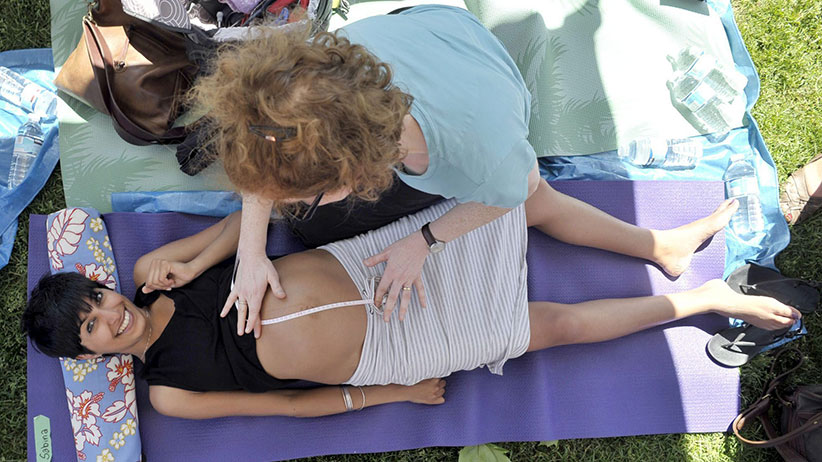 Recent midwife grad Shezeen Suleman has her belly measured by midwife Tracy Gerster, as part of an Ontario Association of Midwives rally on the lawn of Queen’s Park, in 2011. The Canadian Press Images PHOTO/Association of Ontario Midwives

A dead body, kept cool enough, can lie on display in your living room for up to five days while family members pay their respects. The precise temperature and best types of icepacks to maintain it are among the teachings provided by Pashta MaryMoon, a self-described “death midwife” from Vancouver Island. Home-based funeral instruction is part of what differentiates services offered by a “death midwife” from those of “death doulas,” who provide emotional, spiritual and physical comfort to a dying person and their family. A death doula’s involvement with a family typically ends at death, MaryMoon says.

The College of Midwives of B.C. is unconcerned with these fine distinctions. It wants MaryMoon to stop calling herself a midwife, period. After a three cease-and-desist letters yielded no results, the college filed a court petition demanding MaryMoon and Patricia Keith, a Surrey woman who provides similar services, to stop using the word midwife to describe their work. Keith folded. “I’ve consented to the petition and have changed my terminology.” Her website now describes her occupation as “doula to the dying, home funeral guide and funeral celebrant.” She declined further comment.

MaryMoon, who changed both her first and last names after her divorce, has yet to back down. Her defiance, she says, may be connected to her new given name Pashta, a word that came to her during a spiritual exercise. “I make no claims, but I found out it means ‘she who leads the revolution’,” she says.

MaryMoon insists “death midwife” is the only term to describe what she does. Just as a midwife assists a family before, during and after birth, a death midwife provides “pan-death” services, she says. So far, there has been scant demand for MaryMoon’s services, which include teaching family members how to wash and dress a body before it goes into rigor. She’s had only five clients over the past decade. “Most of my work has been educating people about what is possible,” she explains.

MaryMoon believes the college’s petition is based on an unfounded fear that clients will confuse death and birth midwives and that a pregnant woman could hire an unqualified person to help her give birth. “I’ve told them over and over, my colleagues in the U.S. and U.K. who have 20 years experience, say that has never happened.”

In 1993, Ontario midwives left their grassroots to join the ranks of licensed professionals under the Regulated Health Professions Act. B.C. midwives followed suit in 1995 and today midwives are licensed in all provinces except Prince Edward Island. Licensed midwives must meet educational requirements laid out by their governing colleges and abide by prescribed standards of practice. “With that came title protection for midwives,” says Kelly Dobbin, registrar of the College of Midwives of Ontario.  Protected title is standard for regulated health professionals, including midwives, says Lisa Feldstein, a Toronto lawyer who teaches health law at York University. “It all comes back to public safety,” she says. “When it comes to the health field, there is usually protected title when we are talking about life-and-death consequences.”

RELATED: Midwives: Why aren’t we paying them more?

Midwives fought hard for acceptance by the medical establishment, Dobbin says. Since then, their colleges have vigorously defended their names and prescribed acts, which lay out what they can and can not do. They have gone to court to sanction unlicensed midwives, as well as birth doulas caught doing unlawful home-birth deliveries. In March, a Saskatchewan doula was convicted and fined $4,000 for unlawfully providing medical intervention during a home birth. And shortly after midwifery was licensed in B.C., the college had a long-running battle with Gloria Lemay, an illegal midwife who refused to take the mandatory training needed to register and defied court orders prohibiting her from delivering babies. Lemay was ultimately convicted of criminal contempt of court and sentenced to five months in jail. Defeated, she changed her title to doula and no longer delivers babies.

The conflicts over “death-midwife” are more recent. Ontario’s college recently discovered someone using the title and let her know it disapproved. “She cooperated fully,” Dobbin says.

Still, Canada’s new Medical Assistance In Dying legislation has simultaneously lowered the taboo around the word “death” and raised the profile of end-of-life service providers. Jennifer Mallmes, a co-director of the Death Doula Association who is also an instructor at B.C.’s Douglas College, tiptoed around the word when she began work in the area about 20 years ago. She called her first company Happily Ever After Homecare. But in 2015, she changed it to Journey’s Death Care, as people grew to accept the word and concept of such services.

Just like birth midwives before them, Mallmes says, death doulas are currently engaged in an ideological debate over the pros and cons of standards and licensing.  She favours regulation so that death doulas can become an accepted part of the care offered to palliative patients in hospitals and hospices. “Over 70 percent of people still die in hospital, so we need to be in there.” Unlike MaryMoon, though, she would never call herself a death midwife. “A midwife,” says Mallmes, “is someone who delivers a baby.”