Why we need dissenters as badly as ever

Lawyer and journalist William Kaplan talks about the cost of ignoring them, why he's warmed to them and why Donald Trump is a lousy dissenter. 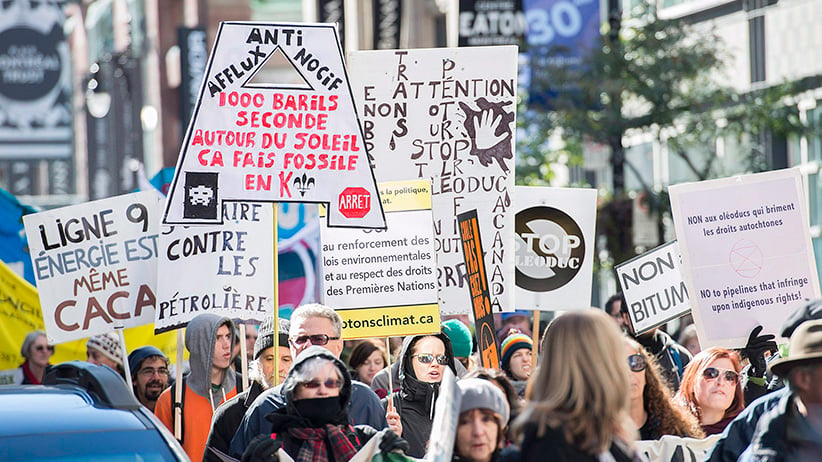 Protesters demonstrate against the Energy East and Line 9B pipelines rally in Montreal. (Graham Hughes/CP)

Frances Kelsey was a week into her job at the FDA when an application to for a new drug called thalidomide landed on her desk. The medication, used to treat insomnia and morning sickness, was already approved in 50 other countries, and everyone at the FDA assumed that Kelsey, a Canadian pharmacologist and physician, would rubber-stamp the application for approval in the U.S. But she deemed the file incomplete. There was no evidence the drug was safe, particularly for pregnant women. Kelsey pushed back against the drug developer Chemie-Grünenthal and kept asking for more evidence every time the application came back incomplete—all the while receiving threatening visits from Grünenthal and the pharmaceutical company hoping to market thalidomide. But Kelsey was unyielding in the face of immense pressure to approve the drug. In the end, thalidomide—soon found to cause birth defects, among other debilitating side effects—was never approved for sale in the United States, sparing hundreds of potential victims.

Kelsey is what author and lawyer William Kaplan calls a dissenter: someone who plays the crucial but rare role of devil’s advocate in order to cut through group-think and inform better, more just decisions. These are public protesters, scrupulous judges and anyone willing to confront what they see as institutionalized injustice. In his new book, Why Dissent Matters (Because Some People See Things the Rest of Us Miss), Kaplan explores the value of dissenters in recent history; how they’ve helped end suffering or corruption, or avoid catastrophes by daring to blow the whistle or simply offer an alternative perspective. “Dissent is noisy, messy, inconvenient, costly, often misplaced, sometimes laughable, usually badly timed, and almost always time-consuming,” he writes. “But the price of not listening to dissenters is far higher than its costs.”

Maclean’s writer Catherine McIntyre spoke with Kaplan ahead of the book release on June 1.

I’ll start you off with an obvious question: Why does dissent matter?

A: One thing I’ve learned over the course of my career is that everybody in the room has something important to add to solving the problems we face. And it’s becoming increasingly apparent to me that dissenters are the especially important ones to listen to—not the people who share our values and see thing the way we see things. They’re important too, but the people who say ‘stop, listen, I’ve got something different to say; some other way of looking at things,’ are especially valuable. A lot of what we see and think depends on who we are, where we came from, and I think it’s really important to listen to as many people as possible as we confront all of the big challenges we have in society.

What are the key characteristics of a dissenter? What qualities do they have that most people don’t?

A: Many of the dissenters I profile are people who had incredible courage and faced all sorts of attacks for standing up and challenging the status quo. Consider Rachel Carson, for example. She gathered evidence about the looming environmental disaster [linked to widespread pesticide use], and for it, she faced an onslaught of criticism from [agriculture] companies—not just her ideas but her personally. But she fought back and fought back. And as a result the world perhaps was saved by a true environmental tragedy and the groundwork was laid for an environmental regulatory state. Or the million or so Egyptians who protested in Tahrir Square against the tyrant president Mubarak. They faced an armed military and who knows what kind of consequences could have occurred. These are all people who felt absolutely compelled to come forward and say something. And that’s not easy to do. It’s so hard to leave your comfort zone and put your neck out on the line.

If dissent is so valuable, why don’t we always designate someone to play the devil’s advocate when making any important decision?

A: What researchers on this have found is that when someone knows that Huey, Duey, or Louie have been designated the role of official dissenter, they just pay lip service to him or her because that’s the person’s job; it becomes another box to be ticked off.

When Lyndon Johnson was president, he assigned this guy named Bill Moyers to argue against the administration’s position on the Vietnam War because they were all so gung-ho about fighting the war. But President Johnson began to ridicule Moyers. Every time he would come into the room he’d look at Mr. Moyers and call him Mr. Stop the Bombing. Of course, Moyers’ job as the assigned dissenter in the White House was to say ‘stop the bombing’ but they got tired of this message because it was ritualized and rote. What really matters are the authentic dissenters; those who dissent because their conscience leaves them no other choice.

You write about how, during the Harper era, there was a war on dissent, particularly targeting science and facts. Do you think we’re seeing this happen now in the United States?

A: I would say it’s almost an international phenomenon, but certainly we’re seeing evidence of it in the United States. What’s especially interesting about this is that it’s not a left-right thing, it’s both left and right. They’re both trying to shout each other out. The whole free speech debate in the universities is one of the places where it’s occurring. We saw this when the conservative speaker [Charles Murray] was invited to Middlebury College and he was jostled on his way out of the campus, and when Ann Coulter was invited to Berkeley. I ask people: what are you afraid of? Their ideas? Are you seriously afraid of Ann Coulter’s ideas? And if you don’t want to listen to her ideas, then don’t go hear them.

It’s difficult because the whole point of universities are meant to be spaces for challenging conventional wisdom, taking on powerful voices, saying unpopular things, presenting new views. Personally, I want to welcome people who think about things and look at things in a way that’s completely different from the way I do. But let me be clear: free speech is one thing; hate speech is quite another. Be a climate-change skeptic, or warn us about global warming, be pro-life, be pro-choice—express your views on all those things. But that’s completely different from cloaking oneself in a free speech mantle or hiding under this umbrella to kick people who are down, people who are threatened, who are sick, who are unpopular. That’s not free speech, that’s not dissent, that’s something completely different.

Had you always practiced that kind of open-mindedness for listening to dissenters?

A: No. I used to think public protesters were a nuisance. They would impede traffic, they got in your way. But I’ve since completely changed my mind. The more I got into this topic, the more I began to think about what it is they’re trying to tell us. Anyone who leaves the comfort of their home to protest in front of the U.S. consulate or at [Toronto’s] Dundas Square or wherever, you should go up to them and ask them what they’re protesting about, because obviously they’ve got something they feel is really important for the rest of us to know. You don’t have to agree with them. You don’t have to do what they tell you to do. But it sure is interesting to listen to them and consider what they have to say.

You write about how some of our most strongly held beliefs turn out not to be true. What conventions of today do you think will be challenged by dissenters in the future?

A: That’s a $64,000 question. What about this one (I’m not saying I’m a proponent of it, it’s just something that could happen): animals have the same rights as people. You think that’s crazy, it’ll never happen. But 40 years ago, people thought marriage equality would never happen. Or that all drugs should be decriminalized. Well that might happen, but is there a political appetite for that in the U.S. today? I don’t think so. Or maybe we get rid of prisons. There’s always going to be a small number of people that are so dangerous that we can’t let them loose, but do we really need prisons for everyone else? If you were a politician in Canada that would be a tough sell. But I bet you anything that happens one day; that we figure out other ways of dealing with offenders that doesn’t involve incarcerating them.

You talk about dissenters as people who challenge the status quo, including, in some cases, political establishments. By that definition, is Donald Trump a dissenter?

A: On the surface, it can seem that way. He rallied against the Washington establishment and promised to disrupt the status quo, not to support it. But like so many of his other messages, it was more sizzle than steak. One of the interesting things about dissent is, it is deeply conservative and responsible in a way. It’s not about destroying our institutions, it’s about pointing out flaws in them so we can fix them and work on some of the terrible problems we have in our society. That’s not Donald Trump. He’s not about making our society better or fixing it. He’s more about tearing it down.