Will and Kate use star power to talk youth mental health

How the royals are bringing pressing youth mental health issues to centre stage, one dorky headband at a time 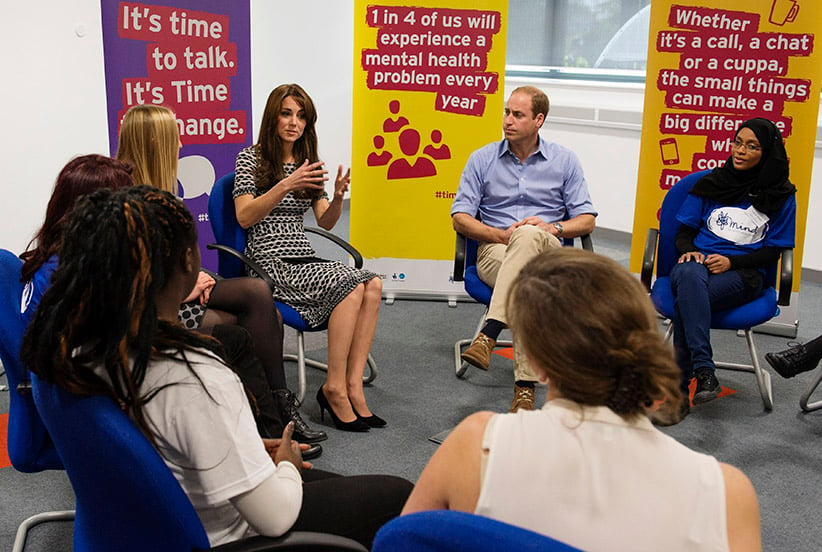 The electric blue headbands were deliberately dorky, designed to spark a conversation. That’s why the three royal musketeers—Prince William, his wife, Kate, and Prince Harry—donned them last May. In a campaign called Heads Together, the trio joined forces with eight innovative charities to end the stigma around mental health and provide help for those affected.

“Let’s change the conversation from one of silence and shame to one of optimism and support,” stated William. After noting that one in three adults say they’d be embarrassed to seek help for their child’s mental health, Kate made headlines by forcefully stating, “Both William and I feel very strongly that we wouldn’t hesitate to get expert support for George and Charlotte if they need it.”

On the last day of their visit to Canada, William and Kate will shine a klieg light on the issue by visiting families supported by a leading mental health charity.

The statistics surrounding youth mental health are troubling. In the latest results of a long-running landmark survey of Ontario Grade 7 to Grade 12 students, 46 per cent of girls and 23 per cent of boys indicated high levels of psychological distress, including feeling nervous, hopeless or worthless. Two-thirds of Ontario college and university students experienced overwhelming anxiety in the last year while 45 per cent were so depressed it was difficult to function. For youth aged 15 to 24, suicide is the No. 2 cause of death, behind motor vehicles.

MORE: Will and Kate visit one of Canada’s toughest corners

Fully 75 per cent of mental health issues begin prior to age 25. Unfortunately, existing health services are divided between children and older adults, which leaves a gaping hole in care at exactly the point many major mental health illnesses display onset, explains Jana Davidson, head of psychiatry at B.C. Children’s Hospital (BCCH). As a result, she says, only 25 per cent who require mental health services get them. “It’s a shockingly low number,” she says. “We wouldn’t accept that in cancer care or diabetes care.”

That’s changing. “One of the phenomena happening right now across the country is the development of integrated youth services, which are a storefront alternative to traditional care in hospitals or even clinics or private offices,” explains Dr. David Goldbloom, senior medical adviser at the Centre for Addiction and Mental Health in Toronto (CAMH). He points to a new $25-million, five-year project called ACCESS, funded by the Canadian Institutes for Health Research along with the Graham Boeckh Foundation. Running in urban, rural and Indigenous communities, it finds alternative ways of doing a better job of engaging youth in mental health services.

Like other jurisdictions, British Columbia has moved to an integrated approach to youth mental health. “The work of our program reaches well outside the wall of the hospital,” says Davidson. That’s why she’s particularly happy that the royal engagement takes place away from the Vancouver-based hospital.

In a Victoria café, they’ll meet families helped by the Kelty Mental Health Resource Centre, part of BCCH. The centre’s services and tools are available throughout the province. Davidson energetically rhymes off its diverse services, including partnering with FORCE Society for Kids’ Mental Health to have parents and youth with “lived experience” of mental health provide tips, information and tools to professionals and those new to dealing with such issues. As well, BCCH has a youth ambassador program started by young people, and supported by Kelty, that works in the community to raise the profile of mental health and lower the stigma.

The impact of such high-profile advocates isn’t to be underestimated. The royal couple’s openness in talking about mental health “has a permissive effect for other people,” CAMH’s Goldbloom says. “It’s a message that wealth and good fortune don’t completely insulate you from the realities of mental illness” pointing out that William and Harry’s mother, Diana, struggled with bulimia and depression. Diana died when Harry was just 12. In July, he confessed to the BBC, “I really regret not ever talking about it.”

Kate, William and Harry aren’t the only royal spokespeople for sometimes uncomfortable social issues. In 1976, when unemployment was at record levels, Prince Charles began the Prince’s Trust to help young people get jobs, training and education. To date, more than 800,000 young people have been helped. His wife, Camilla, aggressively campaigns against domestic violence, urging people to “pull back the shroud of silence” on an often hidden problem.

Many of the organizations working in the mental health field were launched after tragedies. Graham Boeckh died at 22, his schizophrenia complicated by health system failures. The Kelty Centre is supported by a foundation named for Kelty Patrick Dennehy, who committed suicide at 17 after suffering from teenage depression. Davidson and Goldbloom are hopeful needed change will come with the new endeavours and attention. “We’re far from the finish line,” Goldbloom says, “but we’re running.” Perhaps with dorky blue headbands.