Will and Kate visit Haida Gwaii with anger in the air 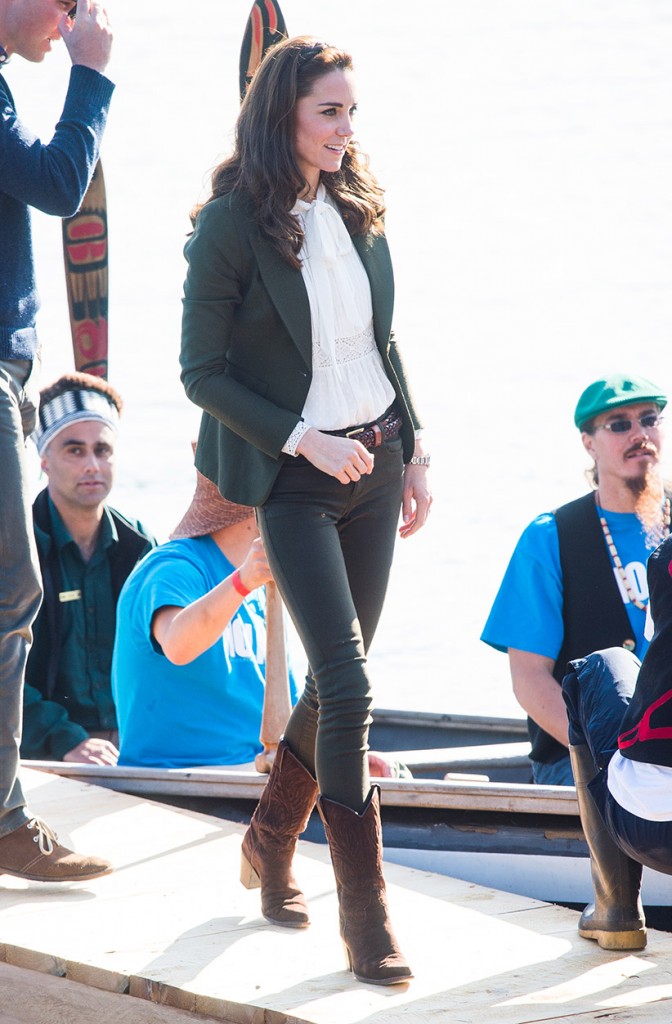 The silence, as Will and Kate rounded Sea Lion Point off Graham Island on Haida Gwaii, felt deafening. The royal pair, paddling a black-and-white Haida war canoe, rode a fast-rising tide onto Second Beach. It was so quiet you could hear the splash of every stroke as their paddles cut through the cold, clear Pacific waters off B.C.’s north coast. Even the 100 local schoolchildren there—some as young as four and five—somehow stayed perfectly still. The only sounds came from the 12-member Skidegate Saints youth basketball team who sang the monarchs in, their voices low, solemn. One held the bright, red flag of the Haida Nation. A lone drummer on a small skin at the stern kept the beat.

Every stop on a royal tour has its own vibe. The Yukon leg earlier this week felt informal, warm, intimate. Vancouver was loud and hectic. The visit to Haida Gwaii was sombre. There was anger in the air.

Royal visit 2016: Will and Kate on the grittiest tour ever

The royal stopover came just 48 hours after the federal government suddenly announced its approval of a controversial, $36-billion liquefied natural gas (LNG) project at Lelu Island, near Prince Rupert. The North Pacific Coast project, which the Haida strongly oppose, would see 19 million tonnes of LNG routed through B.C., then shipped to markets in Asia.

“There’s a lot of anger. And the timing of the announcement—just two days before we showcased Haida Gwaii to the world—made people even more angry,” Haida President Peter Lantin explained. “It puts a lot of pressure on us—what are we going to do? What are we going to say?”

Prime Minister Justin Trudeau, who’s promised to “reset” Canada’s relations with Indigenous peoples—and has, ahem, a Haida raven tattooed to his shoulder—wisely chose to attend a funeral rather than face the Haida at Gwaii Hanaas, the national park they co-manage with Ottawa. B.C. Premier Christy Clark, who was also expected to be here, pulled out the night before. Lantin said the premier was asked not to come, due to longstanding concerns over LNG.

Royal visit in Yukon: When protocol goes out the window

“We are not angry with William and Kate,” explained Jenna Shelford, who is of mixed Maori and Haida descent. “This wasn’t their decision. And although we are angry, it’s not our place to show it today,” said the 16-year-old, one of four Haida youth chosen to take the royal duo crabbing and fishing off Skidegate. Today was about “sending a message,” she added.

That’s why Will and Kate’s fellow paddlers were wearing bright blue, “NO LNG” T-shirts. And why a group of 10 anti-LNG protesters lined up along the Yellowhead Highway, far from media, but at a spot the royal motorcade would have to pass. (Support appeared widespread; during an interview with Maclean’s, eight of 10 passing cars honked support. A passing RCMP officer threw up his hands, as if to say: “If I could, I’d be with you.”)

There is a reason the Haida feel so strongly. There is nothing like the North Pacific rainforest left anywhere else on the planet. Until about a thousand years ago, temperate rainforests like these could be found on every continent except Africa and Antarctica—Japan, Scotland, Iceland all had rainforests rivalling B.C.’s. And once upon a time, this one ran all the way from Kodiak Island, in Alaska, south to California. These days, all that remains is the northern section, in B.C. The Haida are determined to keep it intact—and to keep industry out.

They’re hardly rookies at this. The Haida’s hard-fought, 1985 win over clear-cutting and the Crown is considered one of the earliest and biggest wins by a First Nation in B.C. The government’s duty to consult and accommodate Indigenous and treaty rights, one of the most important precedents in Indigenous jurisprudence, was established in 1993, in Haida Nation v. British Columbia (Minister of Forests).

For Trudeau, tough words from the Haida are an early sign of the bumpy road ahead, as the Prime Minister attempts to live up to the huge range of promises made to Indigenous people in the lead-up to last October’s election.

“We used to take pride in the Prime Minister’s Haida ink,” said Delvina Lawrence. “We thought he was a friend. Now, it feels like he’s stabbed us in the back.”