Winnipeg has fallen for the phenomenon like no other Canadian city, allowing its parks and streetscapes to fill with tiny seeds of cheer 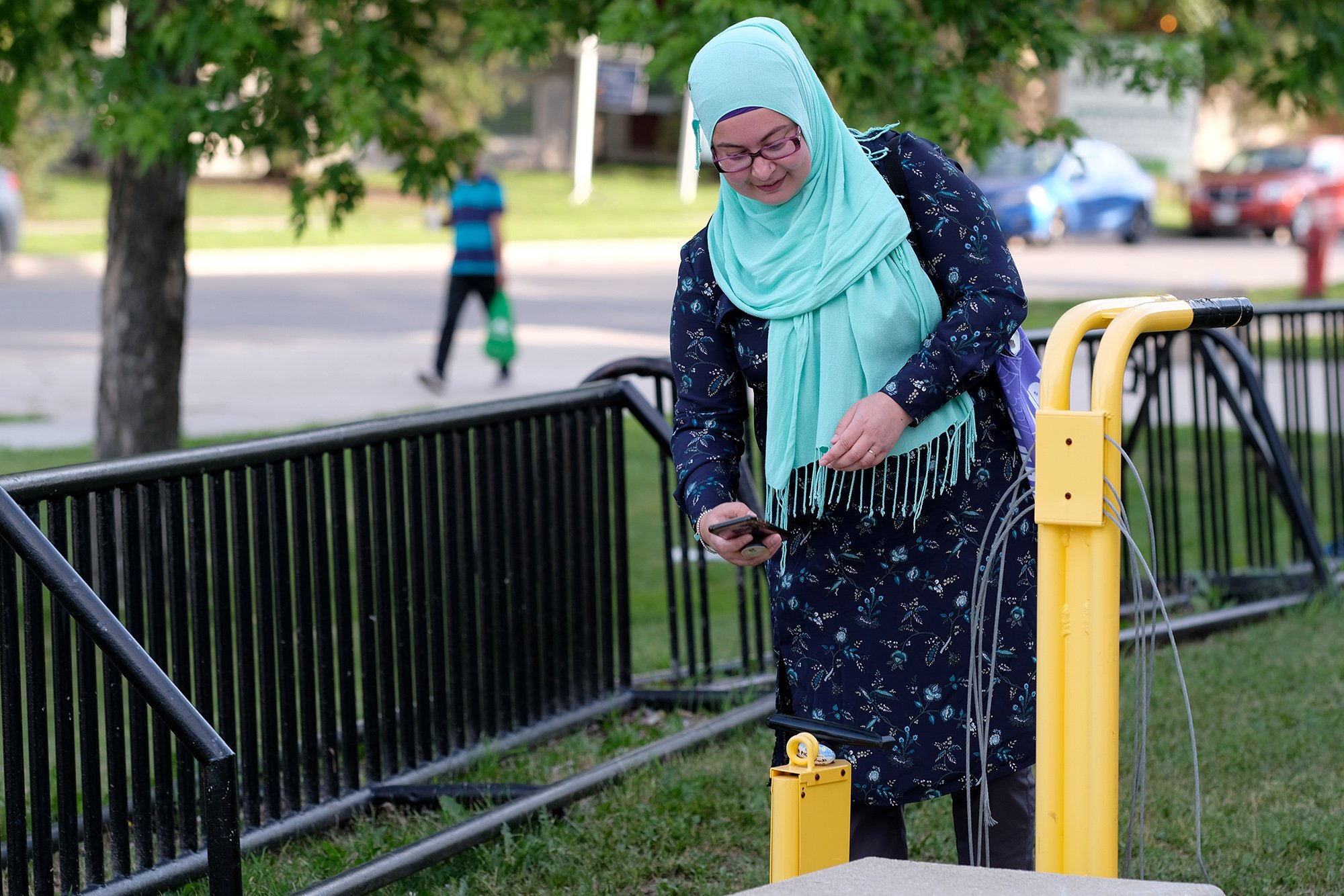 Walking the trails around Dalhousie School in Winnipeg’s south end, Lubna Usmani reminisces about her time playing lacrosse there as she eyes up potential hiding places. Pausing under a memorial plaque for her one-time gym instructor, Foy Mar, she pulls a colourful rock with the word “smile” written on it from her tote bag, carefully places it on a window ledge, then quickly snaps a photo.

“He was my favourite teacher, so I always like to leave one here,” she says, before depositing a bright red rock with “Enjoy the moment” painted across it on a nearby bench. Usmani is on a mission—to spread kindness, one rock at a time.

She is part of the so-called “Kindness Rock” movement, a growing army of civilians across North America who anonymously decorate small stones with pleasing colours or inspirational messages and hide them for the benefit of passersby. Some rocks bear little more than a few daubs; others are tiny works of art. The idea—at least as originally conceived—is simple: to bring joy to random strangers.

According to internet lore, the first official kindness rock was deposited in Cape Cod, Mass., in 2015 by Megan Murphy, a regular beach-walker. A friend found the stone, recognized the writing and texted Murphy. The act grew into a viral sensation, buttressed by the rock art movement, a loose alliance of painters who began hiding painted stones in West Coast communities around the same time.

Lately, the pastime has taken a more serious turn, with painters using the stones to spread social-justice or political messages; in some places, authorities have raised safety concerns about people climbing trees, infrastructure or fences to place or retrieve the stones. Disney, with no apparent hint of irony, has classified kindness rocks as weapons and banned them from its amusement parks.

Winnipeg has fallen for the phenomenon like no other Canadian city, allowing its parks and streetscapes to fill with tiny seeds of cheer. While online rock-painting communities in places like Toronto, Calgary and Vancouver claim up to a couple thousand members, Winnipeg Rocks, a Facebook group, boasts more than 26,000—the equivalent of 3.6 per cent of the city’s population.

There are competing explanations for the city’s status as Canada’s kindness rock capital. Some credit its long winters, which provide ample time to paint and prepare for the summer hiding season. Others point to Winnipeg’s renown as a nexus of both artistry and friendliness, whose residents embrace ideas that foster a sense of community. Far from raising safety concerns, local politicians have been known to participate in the rock craze.

Lorna Kroeker, a Winnipeg mother of three, founded the Winnipeg Rocks group three years ago after a fellow parishioner at St. Vital Evangelical Mennonite Church shared an article about art rocks, never imagining it would birth a legion of hobbyists. “The enthusiasm has been amazing,” she says.

But Kimberly Schonert-Reichl, a psychology professor at the University of British Columbia, says studies show kindness is contagious, which could explain the sustained expansion of Winnipeg’s rock-painting community. “I just feel there are so many layers to the rocks,” says Schonert-Reichl, who researches kindness. “Even the simple process of going and finding a rock, painting it, thinking of the people who will see it, whose day could be brightened—it’s kind of a repeated act of kindness.”

Last year, Flo Smith began painting rocks to bring awareness to murdered and missing Indigenous women and girls. She’s at 1,102 and counting. “People find them and they talk about it, parents even say they talk to their kids about it because they find them,” says Smith. Kroeker approves of this development. The Winnipeg group, she says, works hard to show it is “always welcoming, and that people are allowed to express themselves.” 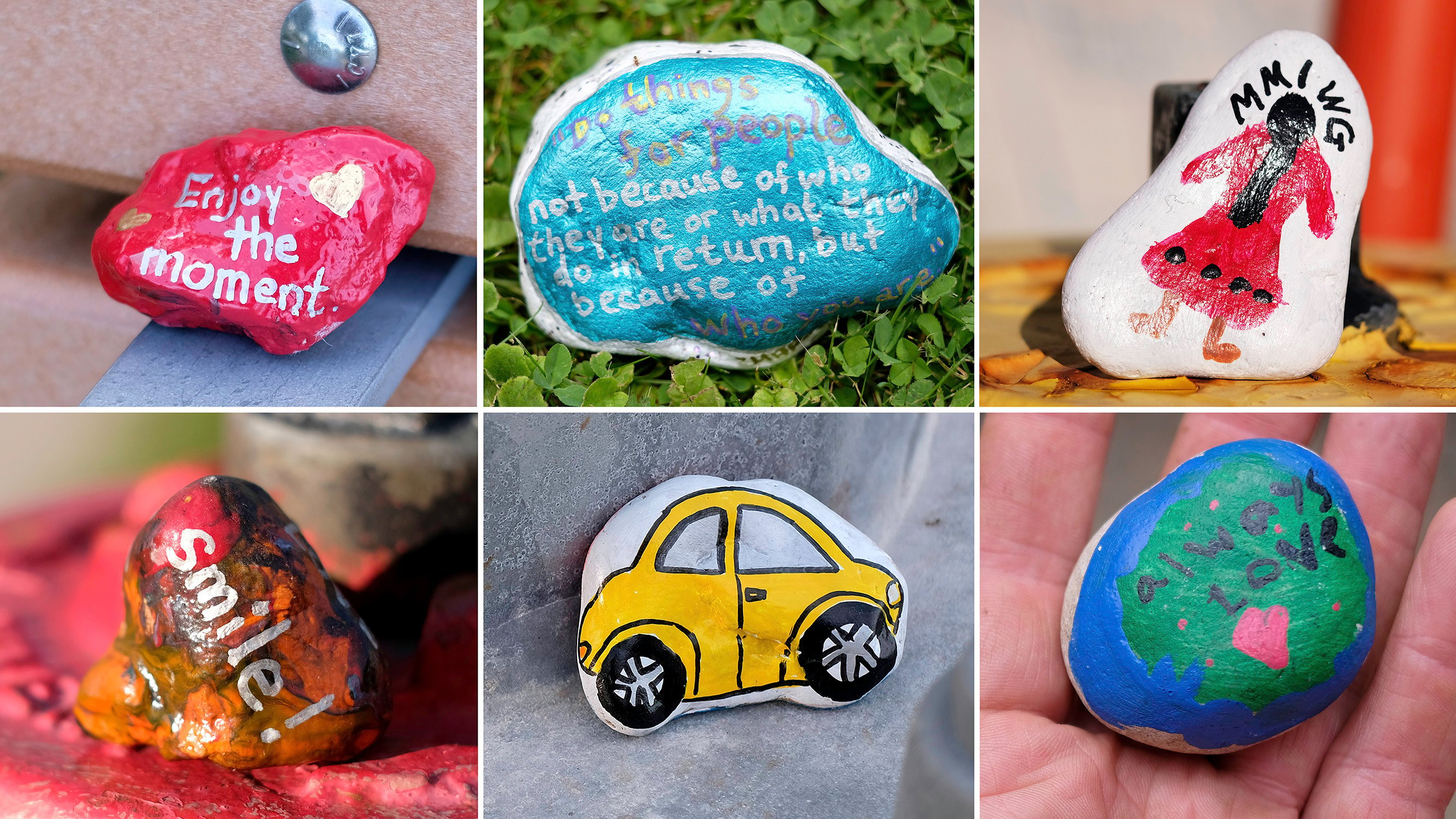 To that end, it has moderated its page to protect people like Smith from online backlash, including the inflammatory mainstay that “all lives matter.” The trouble typically starts, Kroeker says, when someone who believes the movement shouldn’t be a medium for social justice attempts to impose their vision of kindness rocks on another member. “Sadly, even something as simple as painting rocks is not immune to the negativity of social media,” she says.

For the most part, though, a generous spirit prevails on the page, where even the humblest splotch of colour garners accolades and encouragement, providing relief from the daily onslaught of news about racism, economic hardship and COVID-19. Says new member Brandy Hagborg, a thirtysomething working in Manitoba’s film industry: “Everything in the world is broken. Everything except Winnipeg Rocks.”

RELATED: The case for dining out in the middle of a pandemic

If testimonials are any indication, the cycle of goodwill can be therapeutic. Terry Smaczylo built a kindness garden full of kindness rocks in front of his North End home—some painted by himself and his family, others left by strangers. He credits them with helping him battle depression: “They’re helping put a smile on my face.” Other “rockers” say the movement has helped keep them sober, reconnect with family members and even deal with childhood trauma and PTSD.

Science backs up the claims, according to Schonert-Reichl; researchers have found that acts of kindness not only improve mental well-being but also reduce the risk of physical maladies like heart disease. “Lower your cholesterol by helping others is what we found,” she says.

Smith, for one, began painting rocks partly as a response to the murder of a friend and fellow Indigenous woman, Myrna Letandre. The act brought her comfort. Whatever one’s motivation, she says, there’s something innately human about leaving a mark on a bit of the earth: “People have been painting on rocks forever.”

This article appears in print in the September 2020 issue of Maclean’s magazine with the headline, “The stone angels.” Subscribe to the monthly print magazine here.