Athabasca University lets you study anywhere, at your own pace 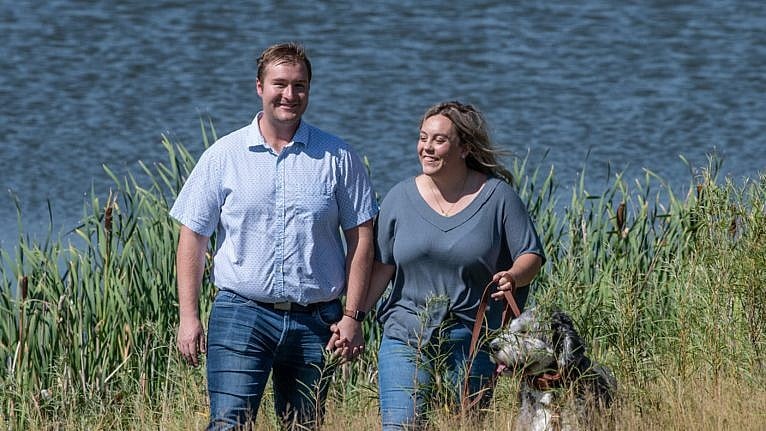 Tyler Harbaruk says Athabasca University gave him the flexibility to pursue a degree while working full time, so he could get a job that keeps him close to home and his wife Morgan.

Like his family before him, Tyler Harbaruk imagined a lifelong career in the oil and gas industry. Growing up in the oilpatch town of Macklin, Sask., it was a way of life.

After high school, he earned a diploma in petroleum engineering and quickly landed a well-paying job in his field. The position demanded extensive travel across Western Canada and the U.S., taking him away from home for weeks at a time.

As Harbaruk’s relationship with his fiancée (now wife) grew, he questioned whether his itinerant lifestyle was a good fit. “I knew I wanted to start a family soon and that I wasn’t going to want to work away forever.”

He decided to switch gears and pursue a career that would keep him closer to home. But he struggled to find a post-secondary institution that would allow him to get a degree while working full-time.

“You think there are thousands of choices, but there aren’t,” says Harbaruk, now 26. “There’s one, and it’s Athabasca University. I wanted to do it entirely online. I couldn’t go to in-person classes. I could learn after work or on my days off. It’s not like there’s a class at a specific time, and you have to be there.”

As an open university, Athabasca University (AU) allows students to learn at their own pace, on their own time — regardless of location, academic history or life circumstances. Founded in 1970, AU quickly turned its focus to distance learning by correspondence and later pioneered the use of computers to deliver courses. It launched the world’s first online MBA in 1994.

So, while many universities struggled to adapt to online delivery during the pandemic, AU and its faculty are veterans. AU courses are purposefully designed for asynchronous instruction, and the school is recognized as one of the world’s leading-edge virtual universities. It serves more than 38,000 students across Canada and in more than 101 countries around the world.

For Harbaruk, the model AU has been perfecting for decades simply made sense. He enrolled in a few courses toward a Bachelor of Commerce degree. With credit for his previous diploma, he was already partway there. And when he was laid off for four months during the COVID-19 downturn, Harbaruk seized the opportunity.

“I signed up for more AU classes. I was used to working long hours, so I thought, ‘I’m just going to do these classes from eight to five and make a bunch of progress toward my degree.’ ”

When work started up again, Harbaruk was back on the road, but he continued his coursework in his spare time. It was going so well that when his company offered him a job in northern Alberta in the fall of 2020, he made “a huge leap” and turned it down. “I knew I wanted to take the next year off to finish my degree and find something else.”

Harbaruk graduated with a Bachelor of Commerce in Finance in June 2021 — just 15 months after enrolling. “You can work at your own pace. It’s not easy — you have to be really dedicated and organized — but it’s definitely possible.”

What makes open universities different from traditional, bricks-and-mortar institutions is their focus on outputs rather than inputs, says AU President Peter Scott, who took on the role in January after 30 years working in open and online learning in Australia and the U.K.

“People in the 21st century lead very complicated lives. To tell them they can only enrol once or twice a year is limiting. Our learners can enrol every month. And if you ask why they chose us, they usually say we’re flexible and we’re high quality.” 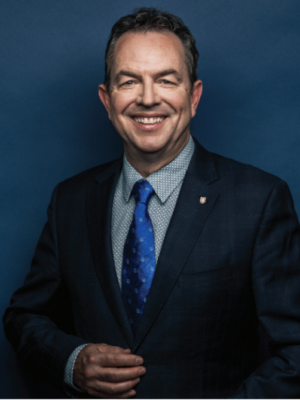 “Whoever you are, our job is to make you successful,” he says. “We don’t pick you. You pick us — and then we help you succeed. We’re not focused on measuring you as you come in and deciding that you deserve a place here. Our job is to measure how what we do changes your world. It’s that output we’re most proud of.”

Flexibility and accessibility are hallmarks of open universities, Scott says. “People in the 21st century lead very complicated lives. To tell them they can only enroll once or twice a year is limiting. Our learners can enroll every month. And if you ask why they chose us, they usually say we’re flexible and we’re high quality.”

Along with the University of Calgary, University of Lethbridge and University of Alberta in Edmonton, AU is one of Alberta’s four publicly funded comprehensive academic and research institutions. The AU business school ranks in the top six percent worldwide, and recently achieved gold-standard accreditation from the Association to Advance Collegiate Schools of Business (AACSB)

AU has made it a priority to remove the barriers many students face at traditional institutions. Scott says some 70 percent of learners are “first-in-family” students — the first in their families to attend university. “When your family doesn’t have a tradition of sending people to college, it represents a new opportunity. You are taking that leap on behalf of yourself, your kids, your cousins and the rest of your family. You are showing them that university can be part of their lives.”

Scott also notes at least one in 10 AU learners lives in a rural or remote area. That’s one of the benefits of asynchronous instruction: Students can participate from anywhere, at their convenience. “It’s really a perfect model for working worldwide,” he adds. “Anything a conventional university does, we can do it better — and for everyone.”

For Harbaruk, the most significant benefit of AU’s open model was how it helped develop his self-management skills, which are essential in his new career.

Far from the travelling lifestyle of his previous job, Harbaruk is now a business valuation analyst with MNP and lives in Sherwood Park, Alta.

“At AU, you’re given a deadline and you figure out how to plan your time and progress through your courses,” he says. “You set the timeline for yourself — you just have to meet the deadline with good quality work. That’s what really matters in the workplace, too.”

For more about Athabasca University and its programs of study, visit athabascau.ca.