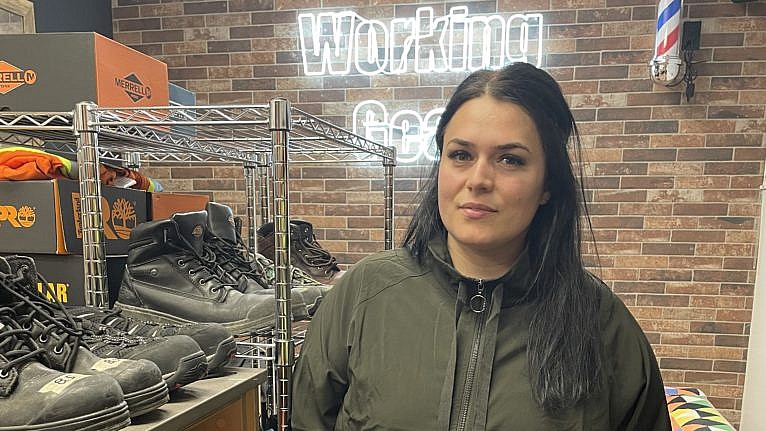 Charities like Working Gear Clothing Society — the fastest-growing small charity in Canada, according to this Veritas Foundation analysis — succeed by targeting unmet needs in the community and showing measurable impact.

MANY PEOPLE IN Vancouver’s Downtown Eastside can see a path out of poverty. They just don’t have the right shoes to walk it. That’s where the Working Gear Clothing Society comes in. Founded in 2007 with the slogan “Give unemployment the boot,” it outfits clients for work, whether they need a suit and haircut for an interview or safety boots for a warehouse position.

More than 1,100 people sought help through Working Gear in 2021. Of those, 29 per cent said they would have otherwise had to pass up a job offer. And donors clearly see the value of the society’s efforts: It received $297,000 in tax-receipted donations in 2021, up from just $1,700 in 2016, putting this small charity at No. 18 on Veritas Foundation’s Fastest-growing Charities in Canada list. “I don’t have to convince people to support us,” says Sarah Beley, the director and only paid employee of Working Gear. Vancouverites see the challenges of the Downtown Eastside — a neighbourhood known across the country as a byword for inequality and drug addiction — and want to help, she adds. “They just don’t know how to do it. And we’re kind of the bridge.”

The Veritas Foundation list shows which of Canada’s 86,000 charities saw the largest growth in donation revenue, based on tax receipts issued from 2016 to 2021. It arrives at a pivotal time as charities are emerging from the COVID-19 crisis, says Mark Bonham, Veritas Foundation executive director. The pandemic forced many of them to pull back on their activities and spurred an increase in both government subsidies and charitable giving, he explains.

That combination left them with more cash on hand: Veritas research from June 2022 shows that Canadian charities’ assets rose 36 per cent from 2016 to the end of 2020. “We are seeing the balance sheets explode,” says Kate Bahen, managing director of Charity Intelligence, which provides research and analysis on Canadian charities. Individual charitable giving was up 2.7 per cent year over year in 2020, according to Statistics Canada, she notes. “There’s so much money in some charities. And people just keep giving them more money.”

Now, it’s time to convert that money into action, Bonham says, rather than giving in to the temptation to play it safe and grow those cash balances. He urges charities to remember their core purpose — which, as he sees it, is to augment government services or intervene to create solutions in ways that governments can’t — and step up to address problems including economic inequality, structural injustices and climate change. “The government is giving these charities the privilege of issuing tax receipts to reduce people’s taxable income, in return for providing a community service,” he says, noting that Canada Revenue Agency rules forbid charities from accumulating cash.

Working Gear embodies many of the characteristics of Canada’s fastest-growing charities, Bonham says. For one thing, it’s small, like 85 per cent of the organizations on the list. In fact, it’s the fastest- growing small charity in Canada. Second, its mission involves fighting poverty, which it has in common with around 40 per cent of the top 500. And it’s innovative: It offers a unique service with visible impact. “They’ve identified an issue that needs addressing within their community and they’ve come up with a means to effectively deal with it.”

Could foundations do more?
Unlike bold organizations like Working Gear, private and family foundations, which appear in large numbers on the Veritas Foundation list, aren’t usually known for their daring or fresh thinking. They’re a category of registered charities that typically disburse funds to other organizations (often operating charities that provide services) rather than undertake charitable work directly.

Foundations can show a sudden bump in donation revenue when, for example, a wealthy person bestows a large gift on them. Under CRA rules, foundations are obligated to disburse 3.5 per cent of their assets in a given year — an amount that can be less than the return on their endowments — and may hold on to the rest. The federal government has introduced draft legislation to increase the quota to five per cent on amounts over $1 million as of 2023. Some, including Bonham, are calling on foundations to give out even more.

Foundations have the potential to foster innovation and stability within the charitable sector, says Susan Phillips, a professor of philanthropy and nonprofit leadership at Carleton University.
Phillips notes there are 11,000 private, public and corporate foundations in Canada, and estimates that 40 of those hold more than $1 million in assets each. “Their potential to take risks, to use their capital for long-term investments and to blueprint innovations and programs, is enormous.

“I think they’re starting to step up,” she says, noting that a number of foundations banded together to take part in pandemic relief efforts. “But it’s a sector that could do much more.”
A promising sign: Veritas research shows that inter-charity funding, where a foundation gives to a registered charity, increased during the COVID crisis.

Support in times of crisis
Consistent support to small charities is one way foundations can contribute to their stability, says Sarah Beley of Working Gear Clothing Society. That’s important because demand for their services can surge without warning.

Working Gear, for example, saw demand explode in early 2020 as people were laid off because of pandemic restrictions. Clients needed to find other work, and Working Gear quickly reacted, expanding its offering to include masks and other PPE.

Operating during the pandemic “was a lot more work because we had to make sure that everyone was safe, with social distancing and things like that,” says Beley. But shuttering was never an option. “It’s not fair,” she recalls thinking, with her clients in mind. “They need it.”

That’s the kind of commitment and nimble thinking all charities ought to embrace, Bonham says. Whether big or small, new or established, his overall message is the same: “Step up to the plate when your community needs you.”

What’s missing from the list?
The planet, for one thing
Bonham’s analysis of the 500 Fastest-growing Charities in Canada reveals that just four deal primarily with environmental issues — a puzzling observation given that climate change is a pressing concern for many Canadians.

The head of a new Ontario-based charity called Trees for Life offers one possible explanation: While Canadians support ecological causes in theory, in reality, they give their money to charities that offer a personal, relatable story.

“For every person who says, ‘I like what you’re doing from an environmental point of view,’ there are 10 others who are saying, ‘There’s somebody in my life I want to remember,’” says Mark Cullen, Trees for Life president and co-founder. “That’s what this experience has taught me.”

Trees for Life was founded in 2021 to plant trees, starting with funding from the federal government’s 2 Billion Trees program. The charity expects to receive as much as $3 million from donors in 2022, up from $2 million in its first year, making it a candidate for a future edition of Veritas Foundation’s Fastest-growing Charities in Canada.

While an environmental message is part of its pitch to donors, Trees for Life focuses on encouraging Canadians to honour first responders, healthcare workers and other “heroes” in their lives with a $150 donation to plant a tree in their name.