Technology blurs the line between white- and blue-collar work 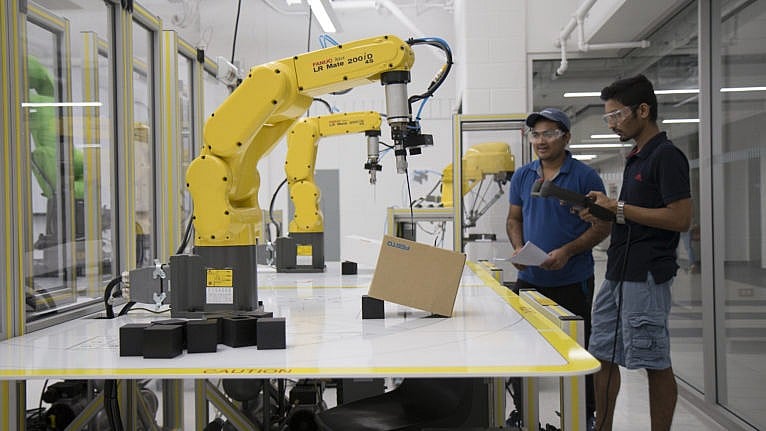 In the Mohawk College robotics lab, students learn some of the skills that are revolutionizing the global manufacturing industry.

IN A MODERN AUTO PLANT, robots are everywhere. People? Not as much. Even if thousands are employed there, they may be hard to spot on the assembly line. “You walk through and you say, ‘Where are they? They’re not putting the cars together. They must be somewhere else,’ ” says David Santi, dean of the Marshall School of Skilled Trades and Apprenticeship at Ontario’s Mohawk College.

The “somewhere else” might be an office, where they’re working with artificial intelligence software. Or a shop, where they’re fixing a robot or retraining it for optimal performance based on data analytics. From mines to main street, automation has transformed how workplaces operate and reshaped the work of skilled tradespeople. “Smart factories” and “Industry 4.0” are the buzzwords insiders use to talk about the changes in manufacturing, metals and other industrial sectors. The idea is that modern technologies and management practices — from machine learning and the Internet of Things to decision-making based on data analytics — add up to a fourth industrial revolution.

How will workplaces and workers keep up? Ongoing, mid-career retraining is one of the big answers. Workers who enter the trades today probably won’t just learn a set of skills that will stay the same for decades. They will periodically retrain and “upskill” to adapt to technological change or to prepare for a move into management. “There are all these other secondary and tertiary skill sets like data analytics and programming that are going to come into the skilled trades, which we never thought of before,” says Santi, who started off in the trades, with automotive and heavy equipment qualifications. “Tradespeople are working with business analytics, they’re working with engineers, they’re working with finance people, and they’re making decisions about equipment and operations together because they all have a role to play.”

To thrive in these evolving workplaces, Santi says, tradespeople can look forward to going back to school — perhaps multiple times. To meet that need, colleges are creating pathways for workers who want to acquire skills that are traditionally considered white collar and/or high tech.

The micro-credential trend in education can fit the bill for skilled workers who just need a small power-up. With online or in-person training over a few hours or a few months, they can gain a new competency, often while continuing to work full time. The Canadian Colleges for Resilient Recovery, for example, is a coalition of postsecondary institutions, including Mohawk College, that are developing micro-credentials and work placements to retrain workers eager to enter the growing green economy.

Meanwhile, as more people develop the skills to work in 21st-century factories and job sites, the traditional line between blue- and white-collar work is disappearing. And with six-figure salaries increasingly common for skilled tradespeople, there’s no longer a pay gap either.

To help prepare workers for the Industry 4.0 era, Mohawk and two other Ontario colleges have teamed up to deliver a new, first-of-its-kind Bachelor of Business Administration degree aimed at those already working in the skilled trades. Through a combination of remote learning and 420 hours of structured work experience, students will pick up know-how in leadership, project management, accounting, applied research and a host of other areas that can help them move up the management ladder or eventually run their own businesses. The first cohort started this fall.

Workers who enter the trades today can look forward to periodic upskilling to adapt to technological change. At left, a Mohawk College student practises with a welding simulator. At right, a student works in the machine shop on Mohawk’s Stoney Creek Campus for Skilled Trades.

All this retraining may sound like a lot of work, but Santi says he finds most young people are eager for careers that allow for constant evolution. “They don’t put the same barriers in front of them that I think we did.”

Coming out of high school, James Kretz worked as an electrician’s apprentice. Then he dropped out. But that time and experience wasn’t wasted, he says. “It made me discover that I wanted to do something a little more within my range. I honestly wasn’t very good at being an electrical apprentice.”

Yet it taught him how to do hands-on work and how to collaborate with others in an industrial setting. It also exposed him to a wider scope of career possibilities. In short, it was a stepping stone to where he is now: in his last semester working toward a civil engineering technician diploma at Mohawk.

Kretz’s advice to other young people? “Whatever you end up picking or doing, just go full tilt, become an expert in your subject matter, and just really dig into the work you’re doing.” And if you’re not excited by it? Move on to the next challenge.

In his co-op placement last semester, Kretz figures he spent 80 per cent of the time at the office and the other 20 on site, making sure the structures he designed would work in practice. (Incidentally, he also got to work with drones.)

So, is he embarking on a white-collar career, or blue?

Both, he says. “There’s a whole host of jobs where you’re going to see both sides.”