Drake, the rapper who thinks he's a Raptor—and why not?

Image of the Week: The international mega-superstar's penchant for chirping opposing players rubs some of his haters the wrong way. But is he really doing any harm? 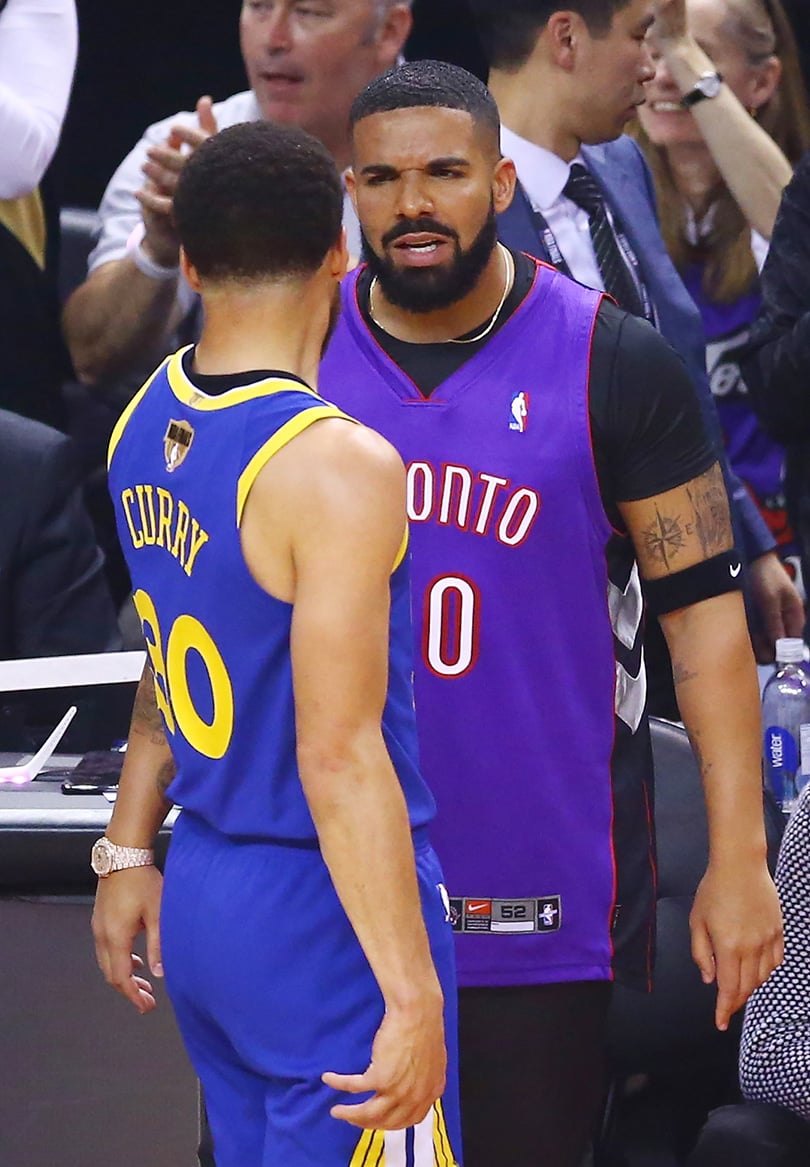 Rapper Drake and Stephen Curry, #30 of the Golden State Warriors, exchange words during a timeout in the first quarter during Game One of the 2019 NBA Finals. (Vaughn Ridley/Getty Images)

Whether it’s perching atop the CN Tower or rejecting things in favour of other things, Drake is a certified meme machine. So it was not surprising to see Aubrey Graham, global ambassador for the Toronto Raptors and a linchpin of their brand relaunch since 2013, hollering and heckling from his courtside seat throughout the team’s unprecedented playoff run. He massaged Raptors coach Nick Nurse; it went viral. The Raptors made it to the NBA Finals for the first time in their franchise history; Drake’s name was trending on Twitter the next day. Critics have been swift. The CBC confirmed the NBA had to call the Raptors to ask them to rein their rapper in. After all, the argument goes, this isn’t about Drake: it’s about Toronto, a city that hasn’t pushed one of their major sports teams to a championship since 1993. It’s about Canada, which is hosting the NBA Finals for the first time in NBA history. It’s about the Raptors, whose deep roster is whisking fans into a frenzy of late-night honking and last-call drinking. But the one dude it is definitely not about is Drake, the critics say, so why is he hogging the attention? Game 1 against the Golden State Warriors turned out no different. Drake is a Golden State fan, so he covered his tribute tattoos to their all-star players with an armband. But in a twist blending pranking with respect, he showed up in a vintage purple Raptors jersey—#30, that of Dell Curry, father of Golden State all-star Steph Curry, who lived in Toronto for a few years—earning smirks from both father and son. After the Raptors won the game, Drake trash-talked Warrior Draymond Green, apparently calling him “trash” as he brushed past. The young Curry saw the whole thing and averted his eyes with a smirk as he passed Drake. How seriously should fans take the interaction? Probably not much. Curry told reporters before the game he thought Drake’s antics were all in good fun—it’s just a game, after all. “I know it’s a tricky situation with him being right there on the court, but at the end of the day, he’s having fun. You can’t hate on nobody having fun,” he said. “Well, I guess in this life everybody hates on people having fun. So it’s par for the course on that one.”

FILED UNDER: Editor's Picks Image of the week