How do you like Megan Rapinoe and her teammates now?

Image of the Week: The all-out audacity of the world champion U.S. women's soccer team once drew rebuke. Now it's winning international applause. 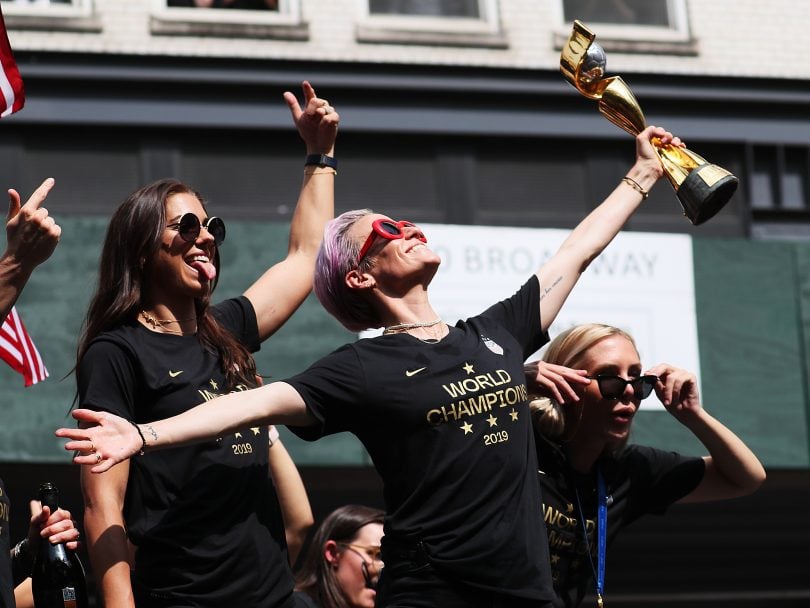 The United States women’s national soccer team does not shy from controversy. A month ago, when the reigning FIFA Women’s World Cup champs demolished Team Thailand with a record-breaking 13–0 victory in this year’s tournament, the players infamously showboated after each goal, symbolically kicking the Thais while they were down. The poor-taste gamesmanship briefly cost them public adoration, and the media focused on one gloater in particular: co-captain Megan Rapinoe, iconic in her short-cut lavender hair and victory pose, arms gently outstretched, as if floating into every photo frame. It’s a pose she repeated throughout the tournament, including after her perfect penalty shot against the Netherlands in the final, helping her team handily win the world title for the fourth time. On Wednesday, the women returned home to a ticker-tape parade down the streets of New York, where Rapinoe repeated the stance to eruptions of cheers. What changed between Thailand and now? For one, her public spat with President Donald Trump, wherein she vowed to not visit the White House if they won (Trump’s lame Twitter response: “Megan should WIN first before she TALKS!”), has rallied legions of progressives. But more than that, the team has smartly leveraged the media attention toward their lawsuit against the United States Soccer Federation, which pays them roughly half what it does the men’s team—which itself has a dismal international record. In one circumstance, according to the lawsuit, a female player earns roughly $4,950 per game, while her male counterpart averages $13,166. No doubt, these women know how to fight. The trick is making sure they choose the right battle.