Is this Marc Bergevin dancing? Or just his red suit?

Image of the Week: The Montreal Canadiens GM does a dad-jig on behalf of the storied club's ecstatic fans 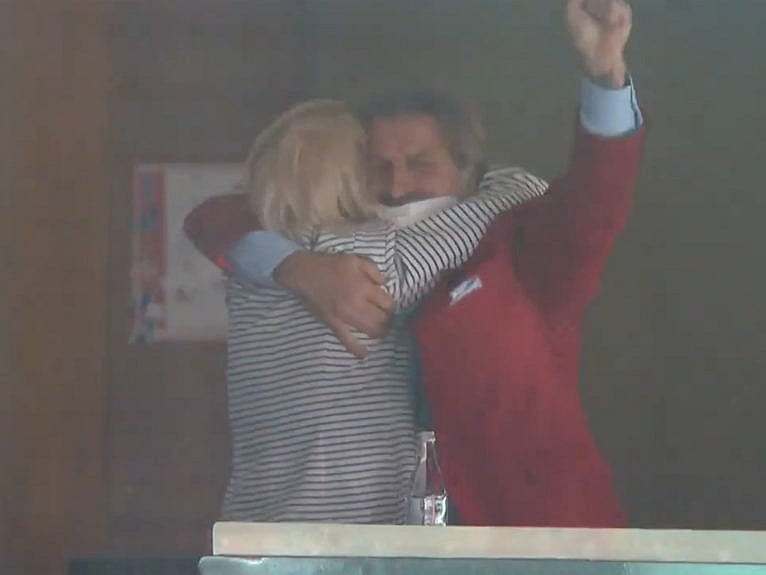 What were the odds that the Montreal Canadiens, who puttered into 18th place in the 2021 NHL standings—24 wins, 21 losses and an underwhelming -9 goal differential—would end up in the Stanley Cup finals? What were the odds that the team’s general manager, Marc Bergevin, and his iconic Lucky Red Suit would not only be vindicated but instantly codified as a meme? That his bold “reset” in 2018, and his all-in spree of off-season signings in 2020, would pay off, sparing him what surely would have been a summary firing if les Glorieux had failed to advance past the first round? What were the odds that, even if the Habs were favoured to win against the Vegas Golden Knights (which, again, they really weren’t), they would seal the deal with a thrilling overtime goal in Game 6? Above all, what were the odds that Montreal would clinch this victory on St-Jean-Baptiste Day, the most festive holiday in Quebec, in a year their celebrations were staunched due to the pandemic? The answer to all these questions, of course, is “not very high.” Yet here we are, the Canadiens having defied expectations on a day Quebeckers were thirsting for a real fête nationale. Yesterday was a triumph, and nobody wore that look better than Bergevin, whose jacket flew in the air during a manic dance captured on the Sportsnet broadcast. The Habs’ sudden success, though, invites a bigger question: what are the odds they can win their first Stanley Cup since 1993?