Johnny Bower: The three ways of knowing that wonderful fella 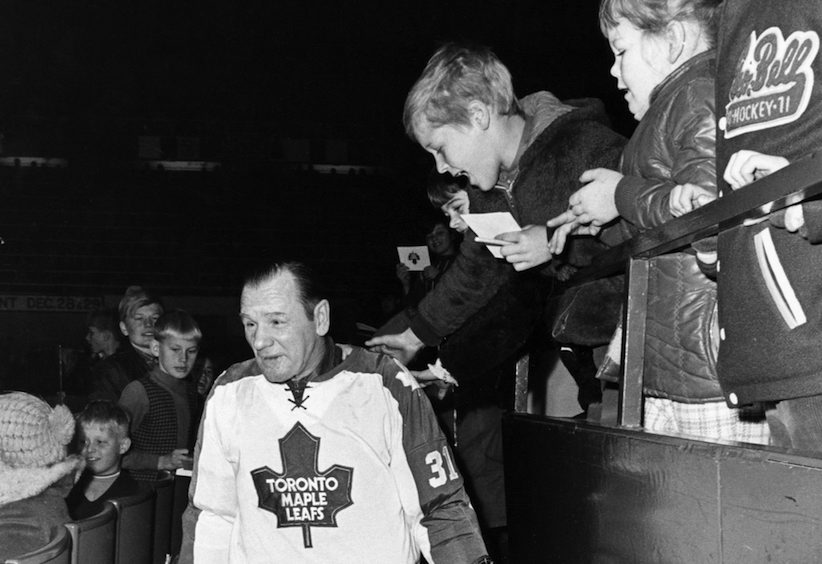 I first met Johnny Bower, the NHL goaltending legend, when was I about 10 years old, at a neighbourhood picnic by the community pool in a small town in southern Ontario. Johnny kept a cottage nearby, and he wandered over that morning, taking a seat at a folding table, a stack of black and white photos next to him. He signed each one with a blue pen, and shook hands and posed for photos and took the time to learn everyone’s name and hear their story, if they wanted to share it.

He seemed old then, if I’m being honest. I was just a kid, and he was probably into his mid-70s at that point. He was wearing a plaid shirt, the first few buttons open. His thinning hair was slicked back, the way he always wore it. The sun glinted off his glasses and he smiled often and seemed to laugh even more. I remember being in awe.

This guy is a Hall of Famer? One of hockey’s legends? Those guys are stars. Otherworldly. Johnny, well, he’s just a normal guy. He must be pulling a trick. It would be awhile before I realized that humility and grace is part of what made him great.

By now, though, you’ve heard the news. Johnny Bower, a child of the Great Depression, who grew up in the Prairies playing pond hockey in 40-below with a cow-patty puck, who lied about his age so he could enlist in the Second World War at 15 years old and be with his buddies, who placed his five-foot-eight, 170-pound frame in front of every obstacle that came his way, who didn’t find his footing in the NHL until he was well into his 30s and then played on until he was 45—old enough to start collecting his players’ pension while he was still active—died on Boxing Day at age 93.

Knowing his age now, and the finality of that number—93—is a strange thing. For much of his life, Bower’s age was a source of intrigue. When he returned home from the war, discharged with rheumatoid arthritis, he had to produce a birth certificate to convince coaches he was still young enough to play junior hockey. He did, and he did well enough at it to earn a contract with the Providence Reds of the American Hockey League and, after that, the Cleveland Barons.

Before he made it to the National Hockey League, he had already carved out a good career in the AHL. He played for the Barons for the better part of 11 seasons, and then made his Toronto Maple Leaf debut at age 33—or 34, depending on who you ask. He was always coy about his age, but, either way, the record shows, for every game during his 12 seasons with the Leafs, he was the oldest player on the ice.

You couldn’t tell from watching him. He was fearless, diving in front of pucks and bodies and odd-man rushes, reaching far from his crease with his legendary poke check, and doing it all with no helmet and protective gear that was the equivalent to wet cardboard. He wasn’t elegant on the ice, but he didn’t need to be. His playing style worked, and he worked at it.

In his fourth year in Toronto, the Leafs began their run of three consecutive Stanley Cups, from 1962 to 1964, before adding one more in 1967. That last Cup, still the last one the Leafs have won, is special beyond that lingering reason. No one expected it. The Toronto roster was made up mostly of over-the-hill veterans. When they won, they giddily crashed into each other at centre ice, all grey hair and wrinkled skin and missing teeth. They looked more likely to be wearing sweaters and suspenders than hockey equipment. And there was Johnny, at the centre of it all, returning every hug that came his way.

That first meeting with Bower, in that southern Ontario town, stuck with me. And almost two decades later, we spoke again, me now a sportswriter and him still that same aw-shucks Canadian who held his icon status like a secret. The Leafs were climbing out of the basement and Johnny had been in the news, talking about their resurgence. I called him up on a weekday afternoon. This time, he spoke to me from his home in Mississauga, from his wood-panelled basement, where he was surrounded by faces from his past and memorabilia from his career.

Among them, surely, were monuments from his first All-Star game, six years after he first laced up his skates in the NHL, and a month before his 38th birthday. He got the win that day, and afterward, on the ice, a reporter asked him about his long journey to get to that point. It was an opportunity to talk about the adversity he had faced, the obstacles he had overcome, the work he had put in. Instead, Johnny smiled and deflected. “It’s a great honour to be playing with all these wonderful fellas,” he said.

Truthfully, his age never mattered. And what he did on the ice—four Stanley Cups, two Vezina trophies, and a small cache of awards and records in the AHL—doesn’t matter much either, compared to who he was away from the game.

MORE: What it means when we mourn athletes like Roy Halladay

Bower never stopped giving back to the team, to the fans, and to those who were fortunate enough to have even a brief flicker of interaction with him. Bower embodied a Canadian idealism—of the small-town, hard-working good guy—and amazingly, he didn’t disappoint when you met him.

We are often quick to project qualities onto athletes when they show even the smallest glimpse of humanity, but those depictions are rarely accurate, those humans rarely as virtuosic as we wish them to be. But Johnny was different. He was the real deal, and one of hockey’s greatest ambassadors. He attended every event he could, until he couldn’t, and he was always grateful to do it.

In our phone call two decades after our first meeting, I talked to him about that day at the pool and how I’d never forgotten his kindness. He chuckled and I asked him if he still had the cottage. He had sold it, he said: “Nobody wanted to cut the grass anymore, and my wife likes the city better anyway.” Then we talked about the game, and how much it’s changed—the speed, the travel, the lifestyle. On the other end of the line, he offered a glimpse into a different era.

No editors bit on the story, so it never saw the light of the day. But those few minutes of conversation, separated by nearly two decades, felt like enough to know him. He was welcoming from the start, and an example of to how to live, and how to be. You didn’t need to see him play to benefit from his abilities. His warmth, humour, and grace were more than enough. And that’s the thing. I never did see Johnny play. He was before my time, but because of who he was, he made me feel like I shared in those memories, too. That’s a gift.

The last time I saw Johnny was on television. It was October in 2016, and the Leafs were raising his #1 sweater to the rafters. On the ice, Johnny blew kisses with both hands, and then turned and waved in each direction. He crossed his arms on his chest, giving himself a hug, and let the tears flow. Then he started to chuckle.

During his AHL days, Johnny, who was born John Kiszkan, changed his last name, taking on his mother’s maiden name of Bower. Bower, he said, was an easier name to remember. He had changed it to make the lives of the sportswriters following him a little bit easier. It’s a funny and prescient thing to think about now, now that the name Johnny Bower is engraved four times on the Stanley Cup, now that it hangs from the rafters of the Air Canada Centre, now that it’s a name that won’t ever be forgotten.

Outside the arena, you can see Johnny anytime you’re in Toronto. His statue is there on Legends Row, a smile forever creasing his face. On Wednesday, as the news got out, flowers and blue Maple Leaf flags started to show up at his feet, the colours popping against the fallen snow. People braved the cold, a shuffling lineup of hooded parkas, each there to pay their respects, or just to say hello. Johnny was at the centre of it all once again, immortalized in bronze, taking his glove off like he’s ready to shake your hand. He was always willing to do that.