Maggie Mac Neil will arrive at Tokyo 2020 with a bang. Three, in fact. 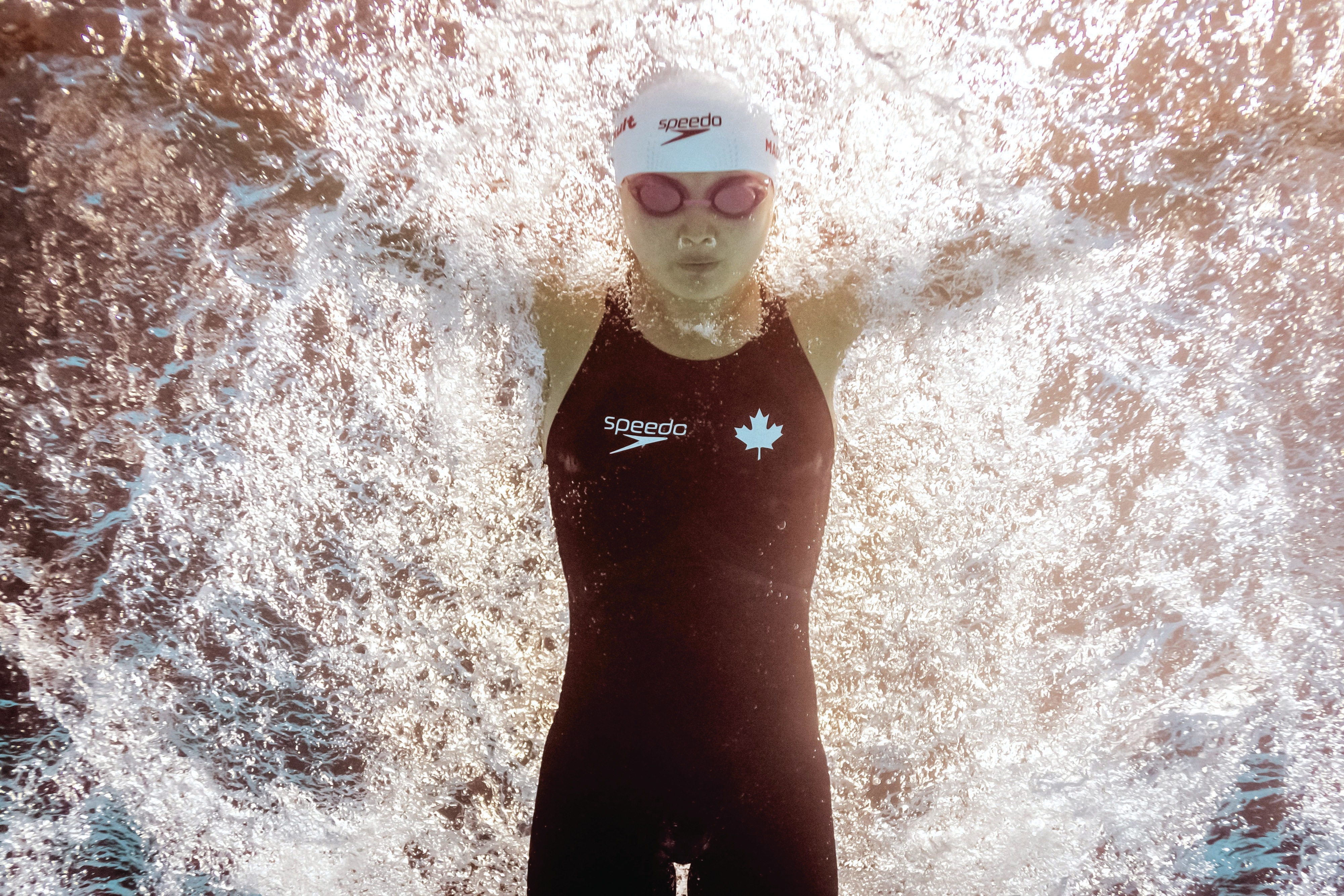 If a swimmer excels at the underwater kicks after a wall turn, ‘that can really become a weapon,’ says Mac Neil’s former coach (François-Xavier Marit/AFP/Getty Images)

Inside the state-of-the-art Toronto Pan Am Sports Centre, the starting platforms at each end of the pool—adjustable, equipped with anti-slip treads and specially designed to maximize the power with which competitors launch themselves—cost $3,300 each, plus shipping and installation.

This should be of little concern to the elite Canadian swimmers who train here. Ben Titley, the national team’s head coach, only mentions the price tag because he’s certain it’s a matter of time until Maggie Mac Neil breaks one with her pre-race triple-foot stomp. “It’s part of her ritual: she gets up and whacks it,” he says matter-of-factly. “We’re waiting for the first bill to come.”

The three booming thuds from the heel of the reigning world champion in the 100-m butterfly are especially conspicuous during Canada’s Olympic trials in late June, when no fans are on hand due to pandemic restrictions. The sound echoes through the building as her compatriots start to crouch forward for the final in Mac Neil’s signature event.

Then, with her back foot firmly planted—her leg bent at a perfect 90 degree angle—she explodes out of the block into an early lead. By the time she surfaces after the lone turn at the wall, she is ahead by an entire body length. Her race is over in 56.19 seconds, almost two seconds faster than her closest competitor.

READ: One Canadian swimmer’s journey to the Tokyo Olympics through the film Nadia, Butterfly

Though the victory is the last stage of qualification for Mac Neil’s first Olympic Games, set for July in Tokyo, her remarks in post-race interviews don’t go beyond the understated confidence of a 21-year-old who is pleased with the chance to compete: “I’m really happy with where I am in my training right now, and I’m excited for the summer.”

But Mac Neil’s race on this day has revealed a degree of strength and ferocity that belies her youth and Olympic inexperience, and should put the world’s top competitors in her event on notice. No wonder her coach is worried for those starting blocks.

Before she could walk, or for that matter crawl, Mac Neil was jumping head-first into water. Her mother, Susan McNair, remembers the first time she brought baby Maggie to parent-and-tot swim lessons at a local pool in London, Ont.; she could barely keep a hold of her little girl. “She would spontaneously jump out of my arms, dive her little body underwater and come back up laughing,” recalls McNair, who is a staff physician at St. Joseph’s Family Medical Centre in London and a former Ontario provincial coroner. “She was completely and utterly smitten with water.” 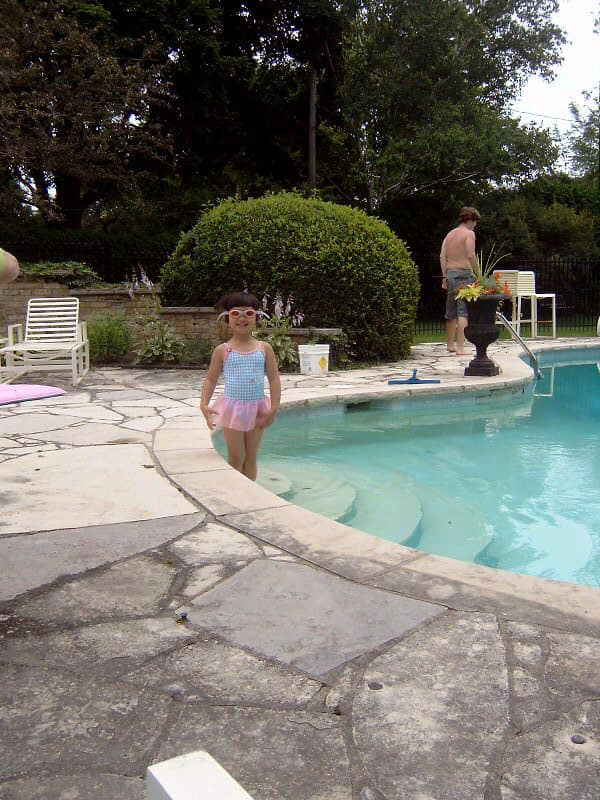 Lessons were a must for safety, not sport. McNair calls herself anxious by nature—perhaps on account of the five years she served as coroner, when she reviewed too many aquatic mishaps. When the family moved to a house with a pool, she wouldn’t risk either of her two girls sneaking to the backyard without adult supervision. Mac Neil, with only a touch of hyperbole, estimates her mom had eight locks on the back door of their home.

Still, the pool became a place for Mac Neil to make friends, and every year those friends had more trouble keeping up with her in the water. She joined the London Aquatic Club at the age of eight, and soon staffers were urging the club’s head coach, Andrew Craven, to step away from teaching the teenagers and watch the new kid.

“The coaches were telling me Maggie was something special in the way she floated in the water,” Craven remembers. She seemed at home in the pool—moving through the water with ease, while staying highly engaged in each lesson. During practice, coaches asked for a minimum of three underwater butterfly kicks—also known as underwater dolphin kicks—after every push off the wall. Some of Mac Neil’s peers occasionally treated those underwater kicks as optional when they were tired, Craven says, but young Maggie would complete the full set after every single wall during every single practice. “If you’re really good at it, that can really become a weapon,” Craven says, “and Maggie is now regarded as one of the best in the world.”

Even when she wasn’t in the water, Craven remembers Mac Neil showing the mental strength needed to excel. When she was 12, she botched a race at the Eastern Canadian Championships in Montreal, standing oblivious after the announcer called her name for the 50-m butterfly, even though her mother was waving frantically from the stands for her to move to the starting block. She stood at the end of her lane and watched her heat go. “I don’t know if it was [me not understanding] people speaking French or if I was overwhelmed, but I completely missed the race,” she says.

But for Craven, the missed heat stands out less than what happened next. Mac Neil didn’t cry, or even sulk. In fact, it didn’t seem to phase her at all. The next day, in the 200-m butterfly, Mac Neil smashed the provincial record for girls 12 and under, a record that had stood for 32 years.

So what’s with those pre-swim foot stomps? There was a race when she was a kid, Mac Neil explains, and she didn’t realize the back foot plate on the starting block wasn’t properly secured. As she pushed off, she slipped, albeit only slightly. Ever since, she has kicked the starting blocks to make sure that never happens. It’s one less variable that can hold her back.

Bitter experience also explains her ritual of vigorously splashing herself with water—three rounds of five splashes—before each race. She says when her parents bought her very first racing swimsuit, it wasn’t the perfect fit. When she dove in for her first race, her swimsuit bone dry, “there was this big bubble in the chest area when the water got in,” she says.

Her compulsive attention to detail extends outside the pool, too. It’s as if she has a need to internalize all the knowledge she possibly can. As a teenager, she memorized every element on the periodic table—just for fun—in the form of a song. At the London Aquatic Club, “she knew every swimmer by name,” Craven says. “We’re not a huge club, but we have maybe 250 swimmers. I’m the head coach and I don’t know the name of every swimmer.”

At the start of the pandemic, when Mac Neil had to quarantine for two weeks after returning home from the University of Michigan, where she studies psychology on an athletic scholarship, she used the time to memorize the first 100 digits of pi—and when that was accomplished, she floated the idea of memorizing the second hundred digits before opting to put her energy elsewhere. 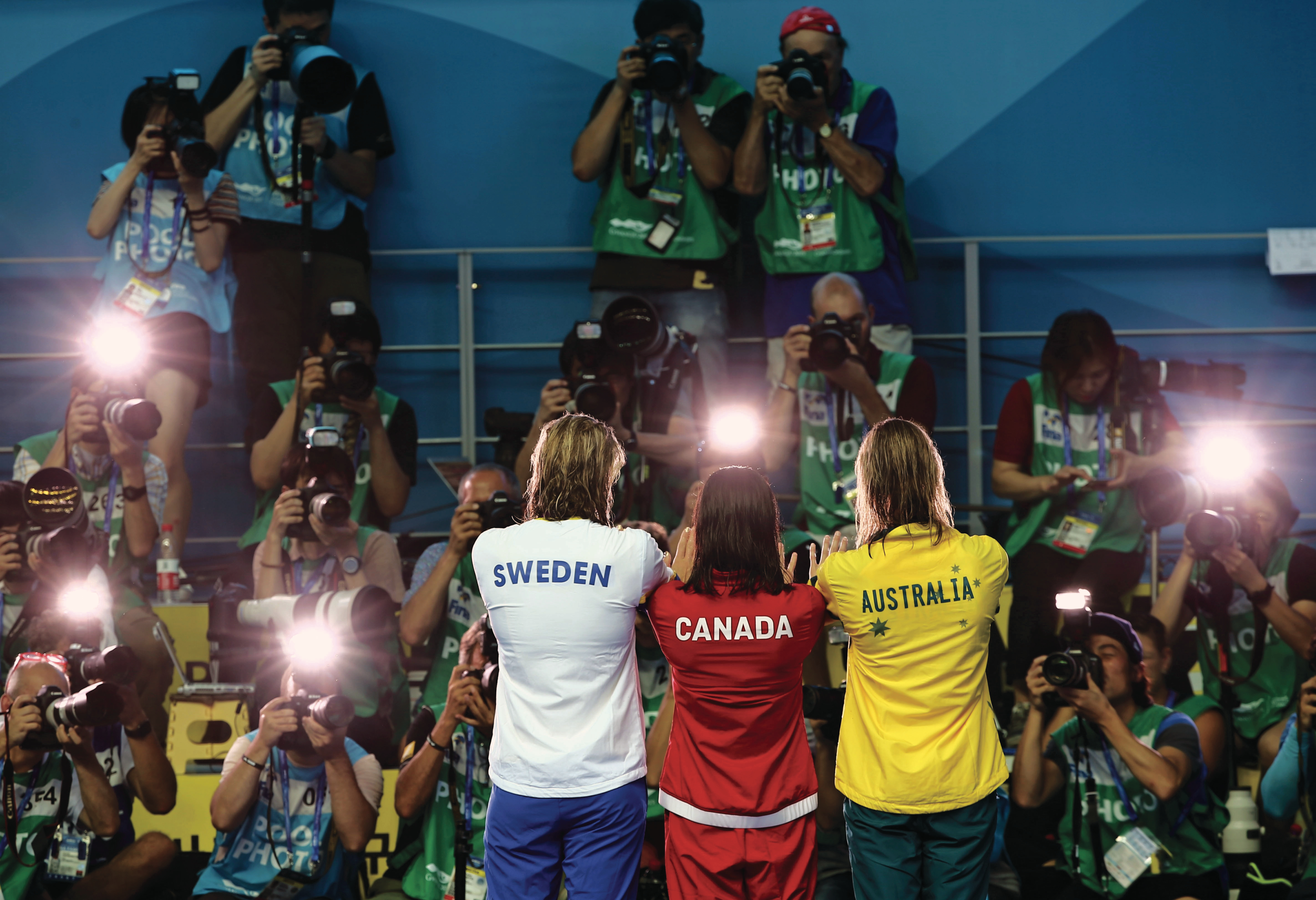 Needless to say, Mac Neil puts more time these days into studying her competition for Tokyo—which may or may not include her greatest rival on the international stage, Swedish world record holder Sarah Sjöström, who is returning from elbow surgery.

Mac Neil will be one of the first to know Sjöström’s status once the news is public. The Canadian proudly calls herself “the biggest swim nerd ever,” constantly checking out the website Swim Swam, which has the latest updates on meets and records around the world. It gets to the point that coaches have threatened to take away her phone at meets. “She’s so plugged in,” says Titley. “She texted me yesterday about how this person made the U.S. team and this person didn’t. I don’t really look at stuff, but Maggie’s all over it.”

Five years ago, Mac Neil failed to qualify for the 2016 Summer Games in Rio; she was forced to watch the 100-m butterfly final on TV as Sjöström edged out Canada’s Penny Oleksiak (who, like Mac Neil, was just 16 at the time) to win Olympic gold. By 2019, Mac Neil had dethroned the Swede at the world championships, and has since solidified her status as Canada’s best butterfly swimmer. (Oleksiak did not compete in the event at Canada’s recent Olympic trials.) Mac Neil also anchored Canada’s bronze-medal 4 x 100-m freestyle relay team at the 2019 world championships. 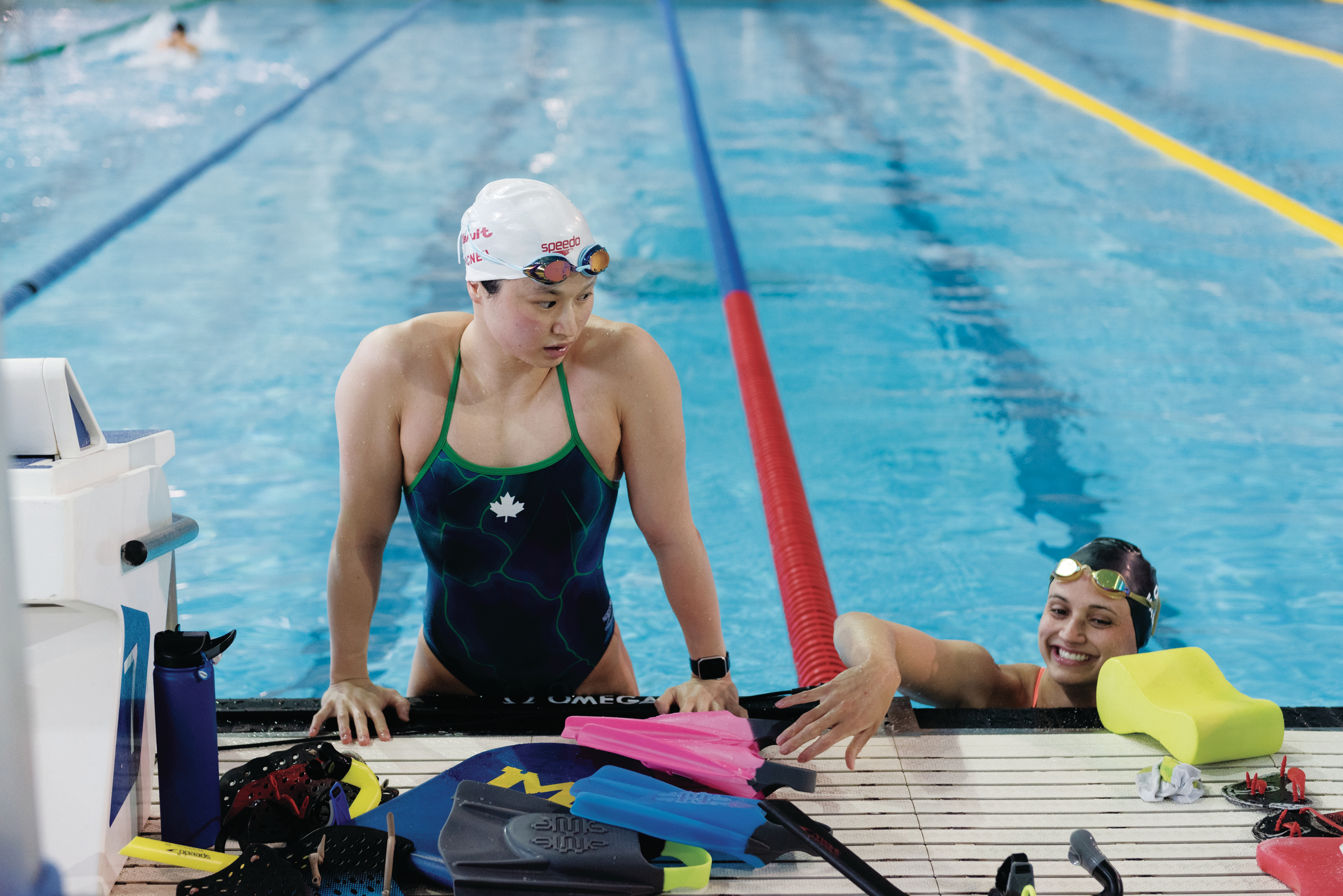 Instead of staying in Canada to train most of the year, Mac Neil studies at the University of Michigan, whose spending on athletics dwarfs that of any Canadian school. But when swimming facilities shut down across Michigan and Ontario during the first COVID-19 lockdown, she returned to London to train in her family’s backyard pool. For a swimmer of Mac Neil’s power, it left a bit to be desired: “I watched her a few times and she’d get two strokes before she’d be at the other end,” says McNair, her mother. “I guess she did a lot of turns.”

Mac Neil didn’t appear to lose a stroke on account of the pandemic—and her turns have only gotten better. Earlier this year, she won the National Collegiate Athletic Association (NCAA) title in both the 100-yard freestyle and the 100-yard butterfly, breaking the NCAA record time in the latter.

“She’s not quite as dynamically fast as some of her competitors, so when you see her race at the Olympics, there is a very good chance she’s not going to be turning first or second,” Titley says. But then he starts to talk about her “fabulous” turn, her skill underwater, and her confidence to close the race in the final 50 metres. “It’ll give people something big to think about.”

It’s a blend of talent, resolve and sheer power that has put her on the podium at meets around the world since she sat out Rio. If it works for her in Tokyo, suffice to say, no one in this country—inside or outside the swimming community—will begrudge the cost of a starting block or two at the Pan Am Sports Centre in Toronto.

This article appears in print in the August 2021 issue of Maclean’s magazine with the headline, “The butterfly effect.” Subscribe to the monthly print magazine here.