Image of the Week: Wherever the NBA star's career takes him next, he'll always be alongside Toronto fans in an agonized crouch—before whooping with unbridled joy 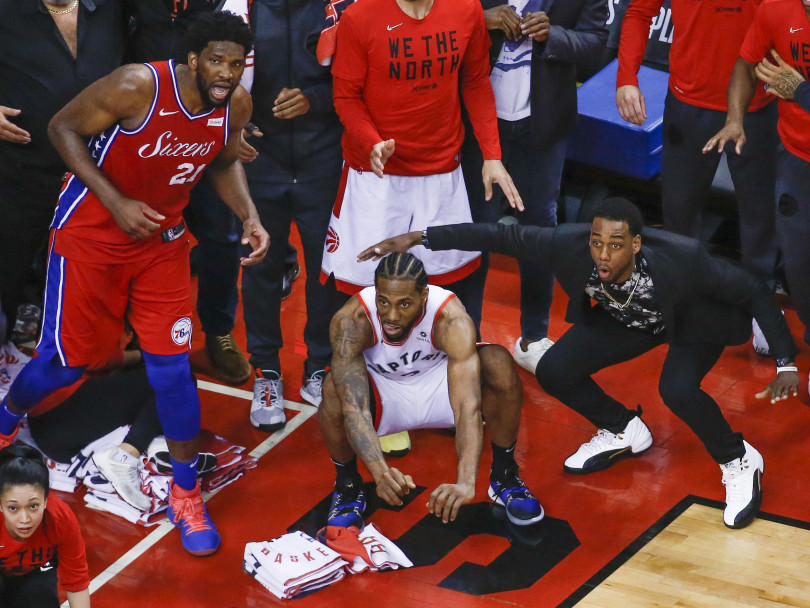 At times, the game felt like Toronto’s to lose. They had the home-court advantage. They had been playing rock-hard defence and strategic offence. But despite commanding a narrow lead over the Philadelphia 76ers through most of this Game 7 match-up, the Raptors found themselves neck-and-neck, 90-90, with four seconds left on the clock. There was only ever one option: get the ball to Kawhi Leonard. The superstar with the seven-foot-three wingspan—the man who, last summer, controversially cost the Raps their eight-year all-star DeMar DeRozan in a trade neither man welcomed—raced around the court with milliseconds to spare and, out of options, launched the ball skyward in a wild, do-or-die effort. The buzzer rang out, surrounded by silence. The ball bounced once, twice, high into the air. Leonard crouched. His Sixers rival, Joel Embiid—a 25-year-old rising star with hopes as high as public expectations for his first-ever Game 7—leaned in for a closer look. The ball bounced a third, fourth time. It bounced, some are saying, for 18 years; that’s how long it’s been since the mirror image of this week’s Game 7 played out, when once-upon-a-time Raptor Vince Carter lobbed an identical buzzer-beater shot against the 76ers—and missed. As the ball, this time, gently fell in the hoop, snapping an ecstatic crowd toward a screaming Leonard, the only remaining question was not whether the Raps can beat the Milwaukee Bucks in the next series of these NBA playoffs. It was whether Torontonians can show Leonard enough love to keep him in the city next year, after his all-too-brief contract expires.

FILED UNDER: Image of the week Kawhi Leonard sports The Shot Toronto Raptors