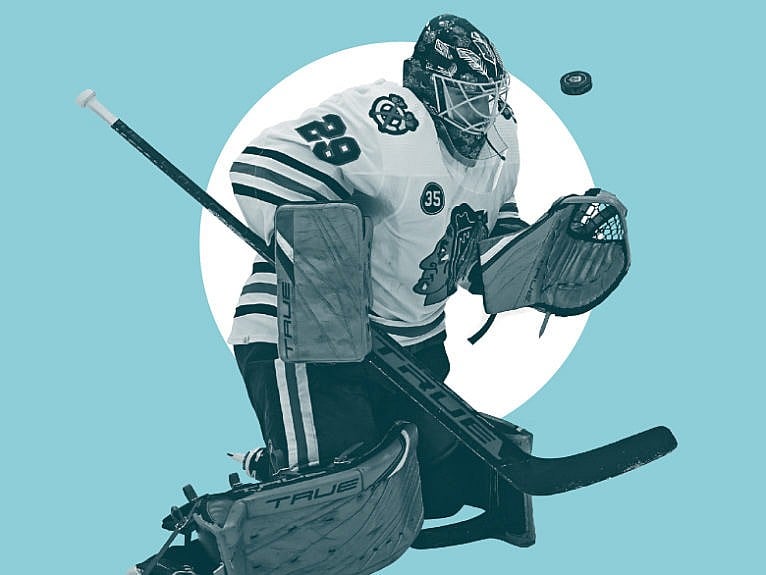 Last year, when someone working with the Chicago Blackhawks contacted Patrick Hunter via Instagram to ask whether the Toronto-based Ojibwe artist would be interested in working with the NHL team to create a land acknowledgment, he wasn’t sure. “They just have a lot of history around people not loving their logo,” he says.

But he agreed to talk, and came away impressed. They were interested in changing the narrative around their logo, highlighting the fact that Sauk warrior Black Hawk was a historical figure, he says, not merely a fictional mascot. “After the phone call, I was like, okay, these guys have a lot of integrity,” he says. “They’re interested in doing the hard work instead of just arbitrarily changing their logo to a black bird. They wanted to help their fans educate themselves.”

The collaboration resulted in a land acknowledgement accompanied by a brilliant floral and feather motif by Hunter. And now, those same elements bedeck a striking new mask designed by Hunter for Blackhawks goalie Marc-André Fleury.

“Hockey’s such a macho sport that I was a little bit worried that it wouldn’t be as well-received, because a lot of the imagery you see in hockey is very ‘grrr,’ aggressive,” says Hunter. “This is not that.”

Click, hover or tap on the buttons to learn more about this one-of-a-kind helmet.

This article appears in print in the March 2022 issue of Maclean’s magazine with the headline, “Minding the Blackhawks.” Subscribe to the monthly print magazine here.