Andray Domise: To understand what this means to fans, one must first have absorbed decades of shade and disrespect in the face of undeniable accomplishments. 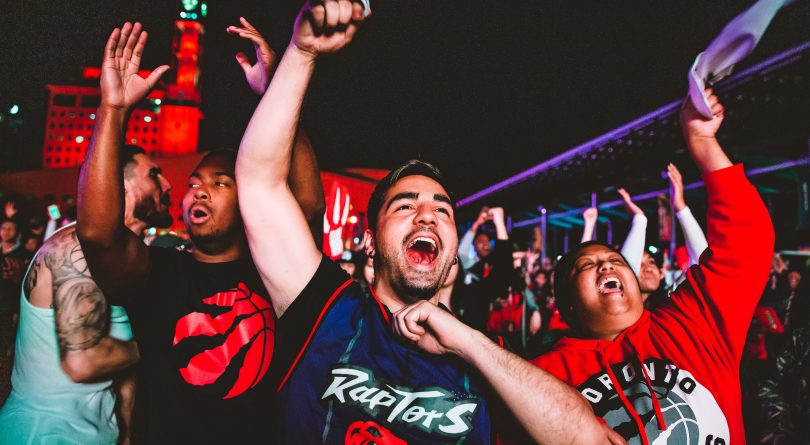 At the beginning, the Toronto Raptors seemed less a basketball club than a series of goofy ideas doomed to failure. Forget laughing at a Disney-owned team calling itself the Mighty Ducks—our NBA team followed all the way through on inspiration from Jurassic Park, itself a glorified Hollywood monster flick. Our star draft pick Damon Stoudamire was a five-foot-10 point guard who was not only dubbed Mighty Mouse, but had a tattoo of his namesake on his right bicep. And our home arena was a slapdash court, assembled in the middle of the SkyDome, requiring binoculars to follow the action from anywhere beyond the 100-level seats.

When expansion draft pick and former Chicago Bulls three-point phenom B.J. Armstrong refused to report to camp during the inaugural season, well . . . it was hard to blame the guy.

Keep in mind, by May of 1994, the resurgent Maple Leafs of the Gilmour era were on their way to their second Western Conference final in a row, and the Blue Jays were coming off back-to-back World Series championships. The NBA, on the other hand, was on a downswing after historic highs. In the wake of the Chicago Bulls three-peat championship, and the U.S. men’s basketball “Dream Team” sweeping the Barcelona Olympics, Michael Jordan’s abrupt retirement seemed to deflate the entire sport.

So, in the eyes of young NBA fans from up north, a Toronto franchise not only had to fill that void but needed a brand identity big enough to stand next to the giants that were our championship-caliber teams in the NHL and MLB.

What we got instead was a professional sports concept built behind a cereal mascot.

But something unexpected happened over the course of a couple decades. This team really grew on us. Mighty Mouse became rookie of the year and was later joined by future all-defensive player Doug Christie. Christie would himself be joined by future all-stars Tracy McGrady and Vince Carter, creating a pattern of in-development superstars that, if nothing else, provided a conversational starting point for every Raptors fan for the next two decades—“Man. What if they stayed?”

Beyond the court, the Raptors franchise marketed itself to new Canadians, making lifelong fans out of the types of young people in Mississauga, Scarborough and Brampton that never saw a Maple Leaf or a Blue Jay in their own neighbourhoods.  Players came out to our community centres, played pick-up ball with the kids, and shook hands with parents. Mister Half-Man Half-Amazing himself Vince Carter, one of the most outsized presences in the NBA, personally donated a basketball court to the Dixon Road community in 2003. Raptors aren’t just basketball players; they’re ‘Toronto Mans.’ This mutual affection doesn’t end once the players’ contracts end; former Raptors who were traded or left for better opportunities are always welcome back in the arena, often to standing ovations when their faces show up on the big screen.

That is, unless that player’s name happens to be Hedo Türkoğlu.

To understand how much this championship means to fans, the sheer frisson of this once-in-a-lifetime story, one must first have absorbed decades of shade and disrespect in the face of undeniable accomplishments. One must have watched their team go from regular season stepping-stone, to playoff pushovers, to post-season threats guaranteed to fall apart in the clutch, to league champions before speculation finally quieted down that our star players might punch their tickets for mid-tier teams like the L.A. Clippers at the first opportunity.

After Raptors president Masai Ujiri traded star player DeMar DeRozan for an injured Kawhi Leonard with one year left on his contract, sports analysts had the trade pegged as a desperate gamble that would ultimately fail. That didn’t happen. NBA promotional clips early in the season ignored the league-leading Raptors, instead centering on the Lakers and their shiny new centerpiece, LeBron James. As if a new dynasty had just been established. That didn’t happen either.

Sports commentators like Stephen A. Smith and Chris Broussard predicted the Raptors would wash out of the playoffs in the face of bigger, stronger and more determined competition in the Eastern Conference. And even if they did somehow struggle through to the finals, the Raptors would find themselves swept away by the most indomitable starting lineup in the Western Conference, the Golden State Warriors.

We, the North, have to laugh.

Ours is a team that literally started from the bottom—the Raptors’ first season had an abysmal 21-61 record to finish last in the Central Division—and subverted every expectation from a stats-obsessed industry that never gave them a chance at an NBA championship. And if I’m being perfectly honest, many Raptors fans (myself included) had lost faith at several points throughout these playoffs.

When Milwaukee took the first two games of the Eastern Conference semifinals, many of us were ready to call it off. And then the Raptors did the impossible: a four-in-a-row backdoor sweep of the Bucks, up to that point the best team in the NBA. When they faced a banged-up but still deadly Golden State, the Raptors adapted like the Borg against Starfleet-issued phasers.

Nothing about this season was supposed to work. Nothing about this team was supposed to work. Not an NBA team in Hockeytown, not their Saturday-morning cartoon logo, not a strategy of cultivating a fan base that looks more like Toronto than you’ll find in any neighbourhood within 10 sq. km of Scotiabank Arena. This championship was impossible. This team lasting this long was impossible. But a quarter century after then-general manager Isiah Thomas burst through that goofy logo to introduce Toronto to the NBA, here we are, standing in the midst of that impossibility.

And We, the North, cannot wait to do the impossible again next season.