Why axe throwing is a women's sport, too 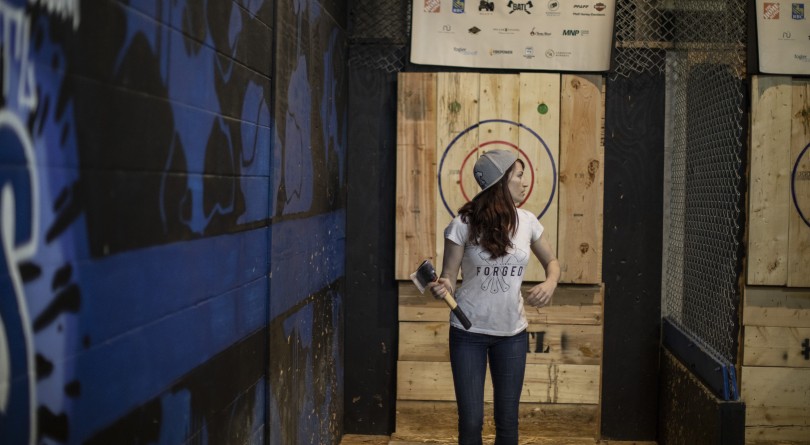 Before the tournament begins, competitors at the third annual National Axe Throwing Championships in Toronto gather by the Wilson Cup, a makeshift trophy featuring four silver axes cradling a winged bowl. A hundred axes are thrust into the air for the battle oath: “Remember primal man who only had his hands! Who forged in ﬁre and steel the tools to kill his meal! We honour him this day and pray our axe to stay!”

It’s a semi-satirical display of machismo that everyone’s in on, since nearly half this crowd of slouchy toques and lumberjack plaid is made up of women. “Our league membership is about 45 per cent female, but since we don’t divide genders, I actually don’t know how many of today’s competitors are women,” says emcee Matt Wilson, founder of the Backyard Axe Throwing League, and the National Axe Throwing Federation commissioner. Despite hyper-masculine roots in hunting and logging, axe throwing as a new sport is surprisingly egalitarian and inclusive, with no divisions between age, experience, body size or gender. Many of the 192 throwers at the double-elimination tournament—listed without photo on the bracket, with only ﬁrst initial and last name—won’t know who they’re facing until they step into their lane.

In some cases, monikers offer hints: RedBeard, as you might assume, is a man. But in many others (Zedpool, Fizzlebeef, Seven) they do not. Beast Warz, with his eight-inch beard and two axes in a heart tattooed on his forearm, faces Phoenix, a slight redhead who steps out of the crowd in skinny jeans and a backwards cap carrying her axe named “Agatha.” She’s 30-year-old Krista Mackie from Whistler, B.C.; if Beast Warz is at all surprised to be competing against a woman, he doesn’t show it.

READ: Diana Matheson on the pay gap in women’s sports

Just a year ago, Mackie applied on a whim, and for a laugh, to work as a host at Forged Axe Throwing, a B.C. venue for competitions, events and parties where guests hurl axes at wooden targets. “I’d recently gone on a date to a gun range and done really well,” she says, “so my boyfriend told me to round out my skill set.” Axe throwing did not come as naturally—“I always say no one is more unteachable than I was in my ﬁrst session,” says Mackie—but she persevered. Being initially terrible, in fact, was a trope recited by every woman interviewed for this story—Mackie has become particularly skilled at coaching throwers past this ﬁrst hurdle.

The last half-decade has seen urban axe throwing in Canada explode from backyard hobby to backroom bar game to private leagues to trendy excursion for birthdays and bachelor parties. There, hosts like Mackie teach safety and basic throws to beer-guzzling guests (once BYOB, locations now boast liquor licences). In spite of the heavily masculine branding featuring Vikings and lumberjacks—or maybe because of it—women quickly embraced the novelty. “We thought marketing like that would bring in men who wanted to show off their brawn,” explains Forged founder James Anderson. “We were pleasantly surprised that we were totally wrong.” Drop-ins are more often women than men, bachelorette parties outnumber bachelor parties, and on any given day, Forged might be staffed entirely by women.

Most bachelorettes begin with a gaggle of ladies posing for photos. Mackie indulges them for a minute, then teaches a staggered-foot, two-handed overhead throw that’s far more exciting than Instagram. “It’s already pretty empowering to throw an axe, then you get a bull’s eye and you feel like a friggin’ rock star.” 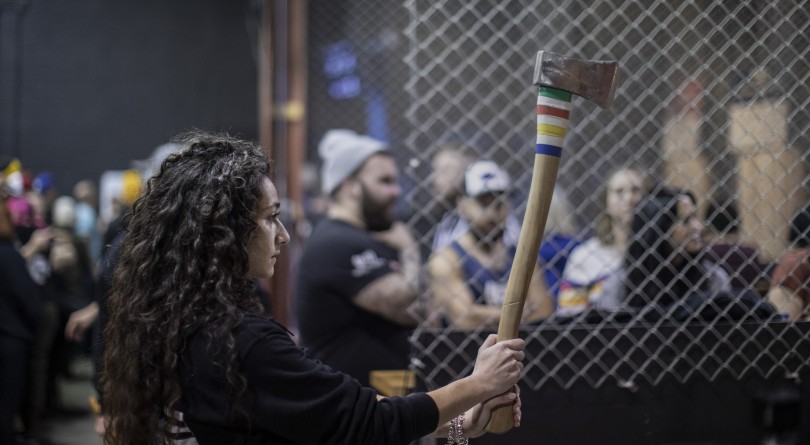 That axe throwing requires brute strength is a huge misconception; form, accuracy and consistency are more important, and that’s where women excel. “Women are more driven, they focus more on technique than power, they’re more receptive to feedback,” says Samantha Mitchell, HR professional in Kitchener, Ont., by day and axe-throwing instructor “Sassy Sam” by night. “Size doesn’t really matter,” says Calgary’s Sasha Edwards, an oil and gas technician who is barely ﬁve feet tall. “When I tell people I throw axes, they look at me like I have three heads.”

As recently as last year, women like Edwards stood out from the crowd. “There used to be maybe ﬁve women at this level and now look around,” says Carly Chalom, whose reputation under her nom de guerre, Seven, preceded her. “Just last year, a man came up to me and said, ‘You’re Seven?’ Then I won.” Alicia Metz, nicknamed Freya after the Norse goddess, attended last year, travelling from Pennsylvania to cheer on her ﬁancé, with whom she owns Valhalla Indoor Axe Throwing. This year, he failed to qualify, but she made it.

Still, as the day goes on, even the ﬁercest of female competitors are gradually eliminated, and the Wilson Cup goes again to Straun Riley, reigning champ for two years. “Whether we like it or not, male competitors still dominate the very top,” says Ashley Baldwin, better known as Ginger Snap. She didn’t qualify this year, but travelled from Kitchener to cheer on her friends from Babes of Axe Throwing, an online group. They support each other, but they’ve never wanted a women-only league. “To be the best, you have to throw against the best,” says Baldwin. And when they’re all done flinging weapons with the men, the women of axe throwing plan to meet for a fancy brunch.