Will Penny Oleksiak make history this summer in Tokyo?

The young phenom has a big record in her sights: the most Olympic medals in Canadian history. Her teammates in Tokyo might make the difference. 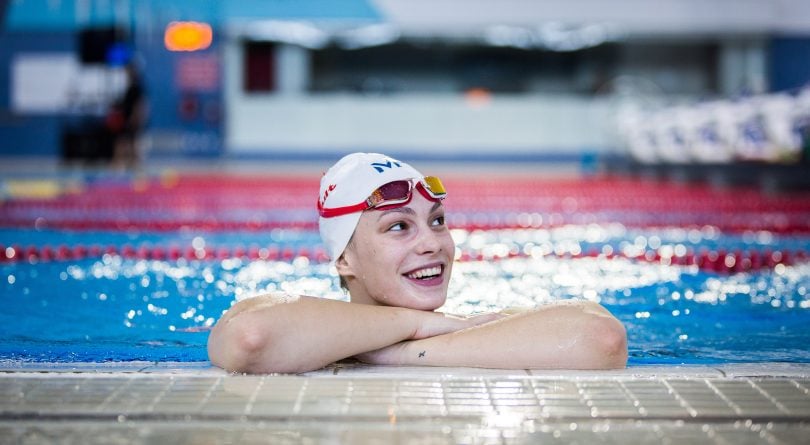 Oleksiak poses for a portrait during practice at the Toronto Pan Am Sports Centre. (Photograph by Chris Donovan)

She’s not talking metaphorically about her status at international swimming competitions, which she ﬁrst established at the Rio 2016 Olympics where she won four medals—including one gold—and set an Olympic record in the 100-metre individual freestyle when she was only 16 years old.

Nor is she talking about her trophy case, which expanded at both the 2017 and 2019 World Aquatics Championships, where she won a combined total of ﬁve medals, tying the record for most wins by a Canadian female swimmer at the competition.

No, she’s talking literally—physically. “My body has changed a bit since 2016,” Oleksiak says. “I’ve been growing a lot. I’ve had to learn how to develop muscles differently and train my stroke a bit differently.”

Gone is the moniker “The Child”—the nickname bestowed on Oleksiak by older swimmers at Swimming Canada’s High Performance Centre in Toronto, when she ﬁrst showed up in the national program four years ago at an age when she couldn’t even apply for a driver’s license. Now 19, Oleksiak is also growing up—and into her role as one of Team Canada’s key members heading into Tokyo 2020.

Oleksiak is one of many talented young swimmers who will represent Canada next summer. Maggie MacNeil, a teenager from London, Ont., upset reigning Olympic champion Sarah Sjöström of Sweden to win gold in the 100-metre butterfly at the 2019 World Aquatics Championships. (Her dad cried after that race. MacNeil says she’s heard he cries after every one of her races, or leans in whichever direction of the pool she’s swimming. “It’s super cute,” she laughs.) Sydney Pickrem, 22, won bronze in both the 200-metre breaststroke and the 200-metre individual medley at Worlds. And then there’s Kylie Masse, who at only 23 years old is cited by many Team Canada swimmers as the person they most look up to in the locker room. Masse won the gold medal in the 100-metre backstroke at the 2019 World Championships, a repeat of her performance in 2017. Many of them have a shot at the podium in Tokyo 2020, carrying on the dominance female swimmers showed in 2016.

But Oleksiak has a shot at something even bigger. With two more Olympic medals, Oleksiak would surpass coxswain Lesley Thompson-Willie (who won ﬁve medals in rowing over eight Olympic appearances) to become Canada’s most decorated summer Olympian. And if she wins three medals at Tokyo 2020, she’d surpass Cindy Klassen and Clara Hughes (who each won six Olympic medals) to become the most decorated Olympian—summer or winter—in Canadian history.

She’s pretty calm about chasing history. When asked about her goals for 2020, she doesn’t mention winning a single Olympic medal or beating a certain time on race day. Instead, having failed to replicate the same kind of success in World Championship individual events that she experienced in Rio (her ﬁve World medals were all in relays), she cites something well within her control: “My goals are more around getting better in technique.”

But if she’s ever curious about her competition on the world stage, she need only look a few lanes over during practice. 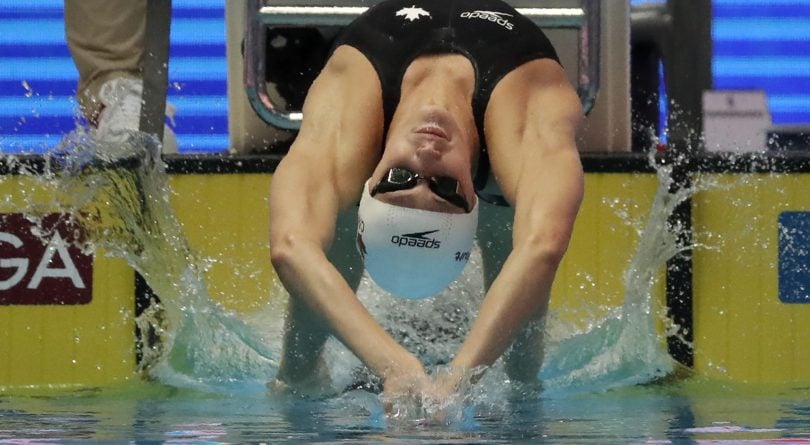 Oleksiak was Canada’s youngest medallist in Rio 2016, but just barely; her teammate Taylor Ruck—who won two Olympic bronze medals with Canada’s 100-metre and 200-metre freestyle relay teams—is only one month older. When Canada won bronze at Rio in the 4×100-metre freestyle relay, the duo simultaneously became the world’s ﬁrst athletes born in the 21st century to win an Olympic medal.

And that close margin keeps them on their toes when they train. At an early November morning practice at the High Performance Centre, the duo swam hard in side-by-side lanes, Ruck often slightly ahead of Oleksiak.

“TBH, we compete against each other in practice sometimes,” Ruck says (shortening “to be honest” to three letters). “When we do it’s really fun because we know that’s what’s going to happen on the international scale. You look across the lane to see your teammate—it’s fortifying.”

Oleksiak, meanwhile, says she’ll happily offer advice to any of her teammates, like trying a different elbow angle to get a better pull in the water. “I think we’re all a lot more focused on improving each other than we are on beating each other because we know that’s for the greater good of the relays,” Oleksiak says.

And it’s that kind of co-operation that has helped Canada excel as a whole.

Canada’s eight swimming medals at the 2019 World Aquatics Championships marked an all-time best, surpassing the record six medals won way back in 1978. The women’s team won bronze in the 4×100-metre medley relay, 4×200-metre freestyle relay and the 4×100-metre freestyle relay—the latter setting a national record with a team comprised entirely of teenagers. “You don’t really notice until you hear it from other people: ‘You were the youngest team out there,’ ” says Kayla Sanchez, the 18-year-old who swam the ﬁrst leg on the freestyle relay teams. “We have great things ahead of us.”

Even if Oleksiak is doing her best to temper expectations about her own personal achievement in Tokyo, it’s next to impossible not to have any for the team as a whole.

“In 2016, there was a naïveté and lack of pressure going into the Olympics,” says Canadian Olympic team coach Ben Titley. “That ship has sailed.”

Titley isn’t talking up Team Canada’s chances of ﬁnishing ﬁrst in any events. Instead, he mentions the “ﬁrsts” that several of Canada’s elite swimmers have had in their lives since Rio: First apartment. First day at university. First breakup. First time driving a car.

“People from the outside may look at them and say the story’s the same: ‘Let’s go win some medals,’ ” Titley says. “The phase of life where success has come to them has been the part of their life where lots has changed.”

Oleksiak took the summer off from swimming in 2018, skipping out on major international competitions, to be a teenager. “It helped to get myself mentally prepared for another few years of really hard training for the next Olympics,” she says. “Taking a break was worth it.”

Titley equally downplays any chatter of Swimming Canada owning the podium in Tokyo 2020. “Having conversations with them about medals is 100 per cent the wrong conversation to have,” he says. “We can’t control medals. I cannot control what happens in America, Australia, China, Sweden—pick a country.”

And yet, the signage surrounding the pool at the state-of-the-art Toronto Pan Am Sports Centre offers a constant reminder: “This is our journey, from puddle to podium.”

And if Oleksiak stands on an Olympic podium three more times, well, then that’d really be a ﬁrst.

This article appears in print in the January 2020 issue of Maclean’s magazine with the headline, “Will she win three more?” Order a copy of the Year Ahead special issue here. Subscribe to the monthly print magazine here.