The Big Idea: Airships are back, and they’re better than ever

With a bit of investment, they can help solve our supply chain woes 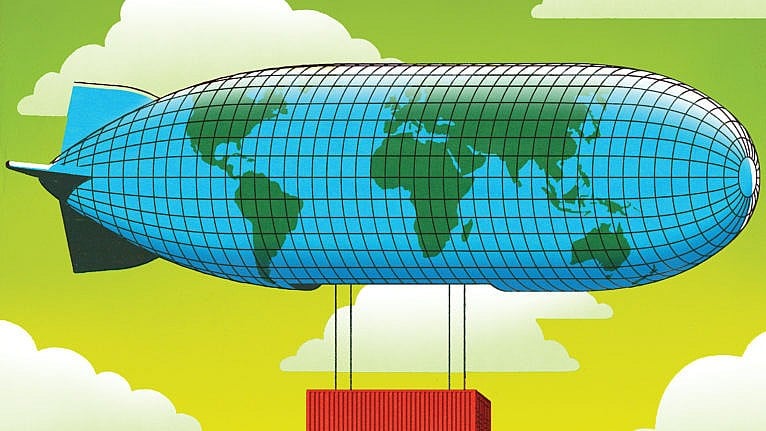 Pierre-Yves Fouillen is the North American business-development lead for Flying Whales, a cargo-airship company based in France and Quebec.

When most people think of airships, the first thing that comes to mind is the Hindenburg, which burst into flames in 1937. I’ll admit that wasn’t the most amazing example of what this technology can do. For years, these vessels clocked impressive transatlantic flights, hosted delightful leisure cruises and were used by the world’s militaries. Their disappearance was brought about by technological advancement. Aircraft like the Boeing 747, which rolled out in the ’70s, were simply faster and more cost-efficient than the lighter-than-air dirigibles. But lately, airships have been making a comeback for a few reasons: low emissions output, attractive price tags and the serious need for freight solutions in a troubled global supply chain. This time around, they’re in hybrid form.

Theoretically, airships could be used to carry anything—building materials, food supplies, even people. The startup I work for, Flying Whales, began with wood. In 2012, when the French Ministry of Agriculture and Food needed a high-capacity machine to transport difficult-to-extract wood from forests high in the Alps, our future CEO thought: airships. Helicopters have agility on their side, but airships produce 80 per cent less pollution and cost 20 to 50 times less. For seaports crammed in times of crisis or landlocked communities with limited airport facilities, our fleet—which is currently in development—could drop off payloads of freight via winches and slings, all without landing on solid ground. Airship projects are now popping up all over the world. Many are targeting the U.K. and the U.S., but the most interesting market, to us, is Canada.

In 2019, the Quebec government invested $30 million to develop and build Flying Whales airships in the province. Our current model is the LCA60T, which has an oblong superstructure and a cargo bay that’s 96 metres long, eight metres wide and seven metres high. The lift is powered by helium—not hydrogen, which is flammable and played a not-insignificant role in the Hindenburg debacle. Right now, the airships run on a hybrid propulsion system, but we plan to have them fully electric by 2030.

Inside, we can store 60 tons of goods. That’s three times the capacity of Hercules planes, which the Canadian government has used to service northern fly-in communities. Best of all, our machines don’t require any extra infrastructure during takeoffs and landings. When completed, the Flying Whales will be the largest aircraft in the world—which is good, because there are plenty of loads to carry.

The pandemic highlighted the many cracks in Canada’s supply chain. Shipping ports were congested for months on end, and planes delivering important freight were grounded en masse. In October, the National Supply Chain Task Force released a report that said the country’s cargo transportation strategy was in desperate need of an overhaul, thanks to ongoing issues with international trade. (Just ask anyone who has recently tried to buy Tylenol for their kids.)

An airship, which travels at about 100 kilometres per hour, can’t replace trucks, which are faster and cheaper over short distances. They also won’t replace cranes, but they can certainly help out from high above. In a pinch, a hybrid airship could potentially hover alongside freight ships and retrieve critical, time-sensitive cargo.

Airships are particularly useful in Canada’s challenging (and increasingly volatile) climate. For one thing, hybrid technology means fewer emissions. Canada’s winter transportation routes are also less accessible these days. In the past two decades, remote road access has dwindled from 60 to 40 days a year. Last fall, flooding interrupted all road and rail travel between the city of Vancouver and the B.C. Interior. Road cargo, meanwhile, is expensive to deliver, and trees and mountain passes sometimes need to be cut or widened to allow for wide loads—like heavy-duty construction equipment—to pass through. An airship could float right on by.

Many airship producers are for-profit, but we don’t want to focus on helping corporate clients make more money. We’ve already received plenty of interest from Canada’s mining sector, for example; in the coming years, many of the country’s buried minerals, like cobalt, will be in high demand for the electric-vehicle industry. But airships should be used in service of the greater good. One of the applications we’re looking at is disaster relief. Indonesia, which has more than 17,000 islands, is regularly exposed to tsunamis and earthquakes. Our airships could carry emergency equipment from warehouses on the main islands to any disaster site in the country within 24 hours.

We’re especially interested in the vast Canadian North: for most of the year, 292 northern communities are only accessible by air. Their remote locations complicate regular access to health care, affordable food and other basic resources for the people who live there. On the energy side, we’re looking into flying in wind turbines that could replace communities’ reliance on diesel generators. On the health-care side, we’re developing a program we call Flying Care, which would deliver modular hospitals. We could transport medical equipment—say, for dentists, optometrists and surgeons—that is tailored to a population’s needs. For some people up north, doctors and specialists might be a four-day drive away, and treatment is often too expensive or too late. More frequent visits from fully equipped medical professionals would flip that care from reactive to proactive.

We’re also exploring the possibility of airships transporting intact houses from one place to another. This could be useful in places like Kashechewan First Nation, which sits on the western coast of James Bay in Northern Ontario. The village regularly floods when the Albany River rises—and it’s only getting worse as the world gets warmer. Each year, millions of dollars are spent on evacuations. The federal government has a plan to move the entire village 30 kilometres upriver, which could take years. Lifting the houses—or flying prefab housing directly to the new site—could be a game changer. It would mean that the people of Kashechewan are no longer prisoners of their geography.

The first Flying Whales assembly line will start production in France in 2024, with the Quebec line—and certification from Transport Canada—to follow. We’re aiming to produce 50 Canadian airships in the first decade, with operating hangars and refuelling points in each province. (You won’t see us at airports; we don’t want to exacerbate existing traffic issues.) One day, our Quebec factory will house and provide airships for cargo transport all over North America.

There’s something about airships that makes people dream. The way they float—it’s quite beautiful. In the innovation space, there’s always a rush to disrupt with something new. But it’s also possible to improve on a creation that already exists. The second age of the airship builds on the best of the past: the cockpit, once full of analog indexes, is now fully digital. The exterior, once made from aluminum and chemical-soaked materials, is now a robust composite. The right idea was there; it just got outpaced by aviation. The goal now isn’t to replace other modes of transportation, but to make the entire industry more efficient. Sometimes, paradoxically, that means slowing down.