Opening Weekend: Made In Dagenham, Love and Other Drugs, Faster, The Nutcracker in 3-D, Waste Land 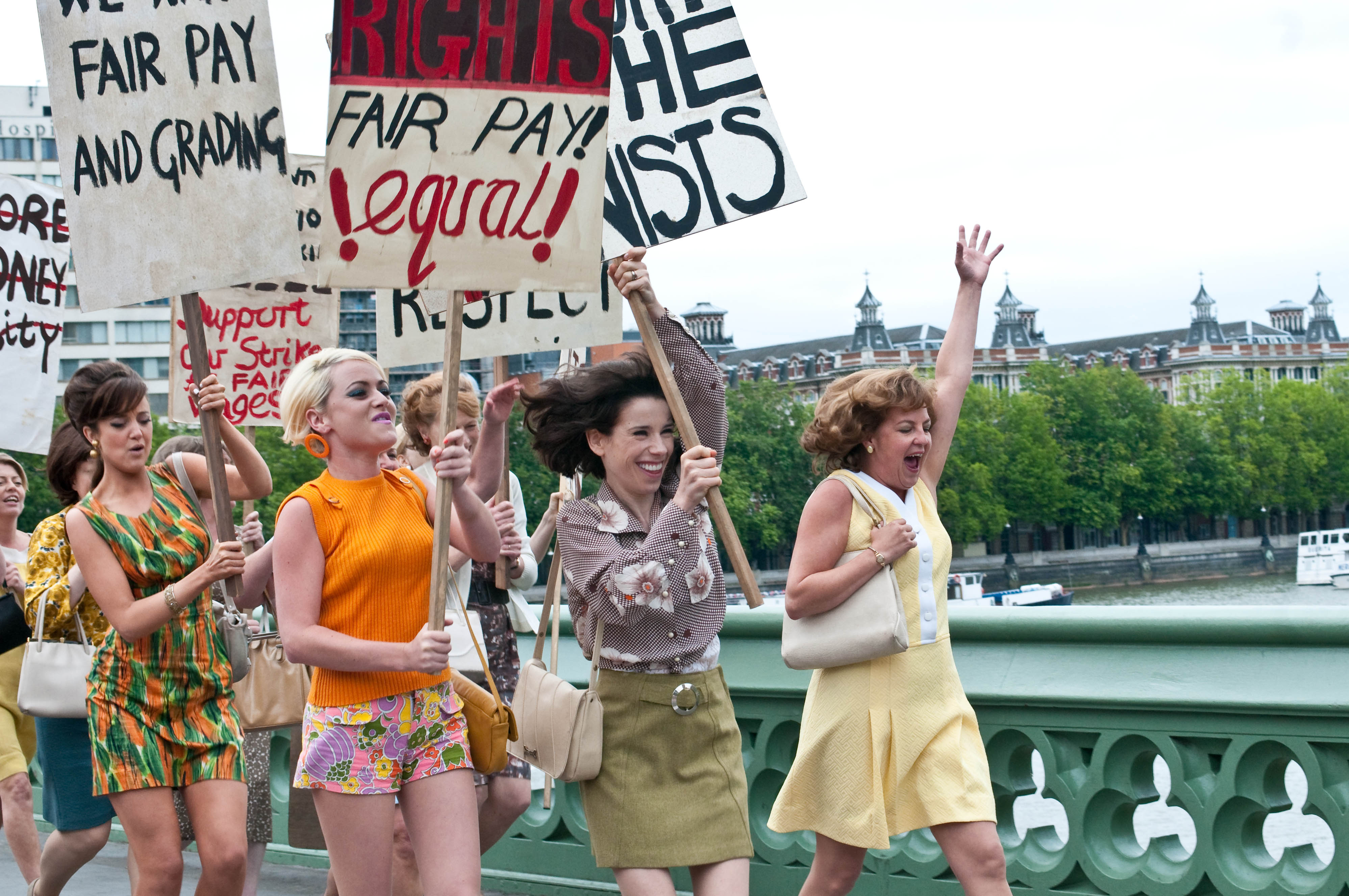 (from left) Andrea Riseborough, Jaime Winstone and Sally Hawkins in 'Made in Dagenham'

This being American Thanksgiving, I realize that Hollywood’s opening weekend kicked off Wednesday for a number of new releases. But we’re in Canada, so at Unscreened we’re sticking to the usual end-of-week ritual. The movie I’d most heartily recommend is Love and Other Drugs. Even though it’s a dog’s breakfast—a kooky contrivance that mixes Viagra, Parkinson’s disease and rampant nudity—the chemistry between Anne Hathaway and Jake Gyllenhaal, two of the most watchable movie stars on the planet, makes it a guilty treat. And Hathaway’s performance is worth an Oscar nomination, though the movie may lack the gravitas to get her one. For more on Love and Other Drugs, and an interview with director Ed Zwick, go to: A romantic comedy—plus sex. Lots of it. There’s a glut of new movies out. I haven’t yet had a chance to see Tangled, the new Disney animated feature, which is getting rave reviews across the board, or Burlesque, which hasn’t generated much heat aside from landing Cher on the cover of Vanity Fair. But here are some thoughts on those I have seen:

Hollywood gets a of flak for turning true stories into formula fables, but never underestimate the ability of the Brits to do the same thing. In the tradition of Calendar Girls and Pirate Radio, along comes Made in Dagenham, another spirited romp that converts history into a giddy jamboree of clichés. There’s a terrific tale at the heart of the film, the story of a 1968 strike by 187 female machinists who sewed car upholstery in a dilapidated Ford plant in the Essex town of Dagenham. After being reclassified as “unskilled” labour, the women—a tiny enclave in a company employing 55,000 British workers—defied both Ford and their union bosses as they walked off the job demanding equal pay. The result was a landmark settlement engineered by the Labour government’s Secretary of State Barbara Castle which led the way to Britain’s Pay Equity Act.

In this fictionalized account, the adorable Sally Hawkins (Happy-Go-Lucky) stars as a composite character named Rita, a reluctant rebel who emerges from the shop floor to lead the strikers, a flamboyant array of sassy stereotypes, from the aspiring model (Jaime Winstone) to the renegade party girl (Andrea Riseborough). The male characters, who are even flatter, range from  Rita’s gormless, sad-sack husband—who holds the fort at home while extravagantly burning dinner—to a token sympathetic union rep (an elfin Bob Hoskins).

Directed by Nigel Cole, who also made Calendar Girls, the film is a frustrating mix of heart and hokum. The story seems to take place in a historical bubble. This is 1968, but you’d never guess that the capitalism is under siege by student movements, anti-war movements and epidemic strike actions. It’s as if the women are in their own little Broadway musical of a revolution. But behind the scrim of a didactic screenplay, there are some superb performances. Sally Hawkins is wonderful in the lead role, acting just on the brink of emotion, as if she’s shyly discovering her mission just as the words are being formed, could dissolve in a puddle tears at any moment, but is bravely keeping her cool. The deft, offbeat rhythm of her acting is no small triumph over the script. And while this comparison won’t mean much to younger readers, she could be channeling Rita Tushingham, the quirky It Girl of British cinema when these events were taking place, during the late 1960s. Also as Lisa, the wife of the factory boss who crosses class lines to befriend Rita, Rosamund Pike performs miracles with a slender role—in one fleeting, heartfelt speech of support, she steals the movie in less than a minute. And finally, Miranda Richardson makes a meal of her role as the Labour government’s feminist firebrand, Barbara Castle. It’s the kind of role that you imagine might have been first offered to Helen Mirren. Who knows if Richardson’s incendiary portrayal of the minister is at all accurate, but it’s a lot of fun. Too bad the movie does not live up to the skills of its stars. 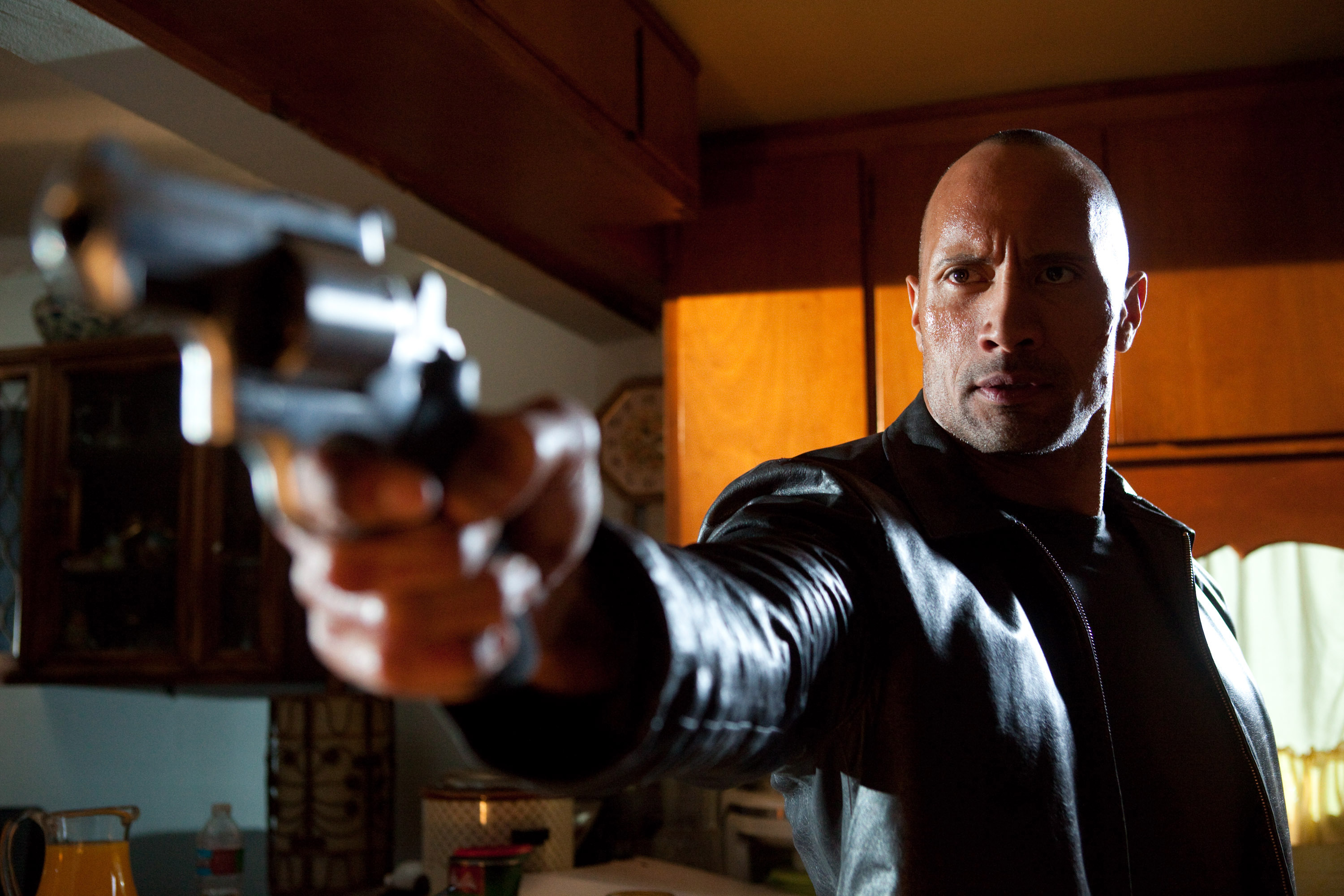 Dwayne (“The Rock”) Johnson stars as an ex-con on a homicidal revenge mission in this hard-boiled action movie that plays like something Quentin Tarantino might have made if he’d had a frontal lobotomy. Johnson is physically impressive, a flesh-and-blood Terminator without the irony, but when he opens his mouth, his acting makes Arnie sound like Olivier. Fortunately, it stays shut most of the time, while his character, The Driver, demonstrates his prowess behind the wheel of a vintage Chevy SS muscle car. It’s all so retro: this guy can’t go to the corner store without doing a wheelie and laying a mile of rubber. The plot of Faster is a slow-burn Mexican standoff, as two predators set their sights on The Driver: a dirty detective on the verge of retirement (Billy Bob Thornton) and a super-slick contract killer (Oliver Jackson-Cohen), who drives a Ferrari and acts like a GQ fashion ad come to life. Faster is not without a few guilty pleasures. As action porn, it receives a passing grade. And it’s not the worst movie I’ve seen this season. That honour goes to The Nutcracker in 3D. 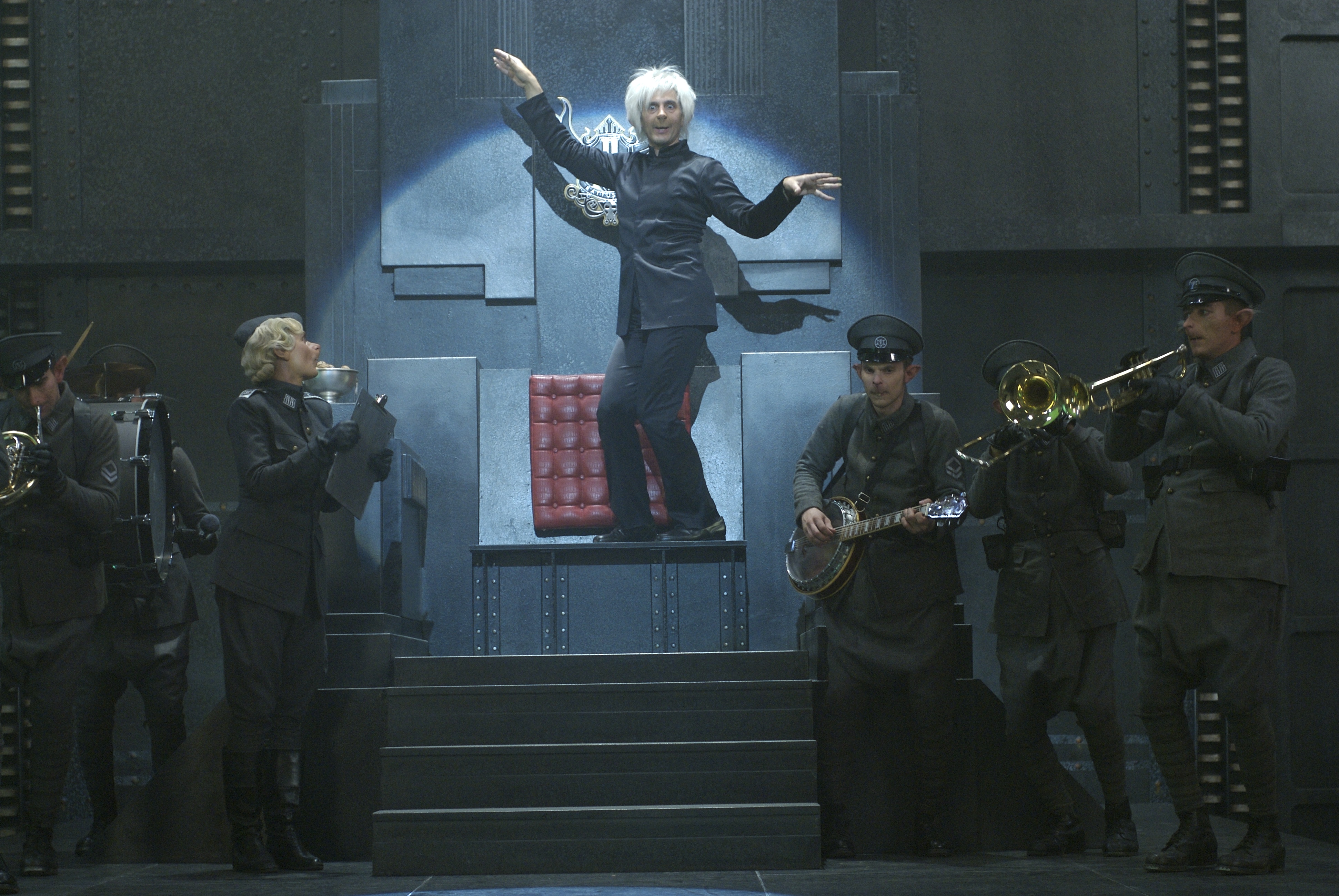 John Turturro in 'The Nutcracker in 3-D'

The Nutcracker in 3D

Beware! Do not see this movie. Do not take your children to this movie. Do not be tempted by the title, or dancing visions of sugar-plum fairies. Do not put on the 3-D glasses. You will regret it, believe me. Even the 3-D is lousy. This is one of those movies that makes you wonder how on Earth it got made. I realize it’s hard to make movies, and it’s amazing that so many of them turn out as well as they do. But in this case, it defies imagination how a movie could turn out so badly. Directed by Andrei Konchalovsky (Tango and Cash, Runaway Train), it transplants the Nutcracker fable to Vienna in 1920, where young Mary (Elle Fanning, Dakota’s sister) sees toys come to life in a household ruled by an imperious father (Richard E. Grant), and subverted by a zany Uncle Albert Einstein. In the fantasy sequences, John Turturro plays a scary, repulsive Rat King, a fascist monster styled as a mincing cabaret queen in an Andy Warhol wig. It all unfolds like some orphaned Lynchian nightmare that’s been re-purposed as a sick Christmas story. Lyricist Tim Rice cake-decorates Tchaikovsky’s music with a lot of sugary rhymes. But there’s no ballet, and no magic, just a disjointed narrative with flashes of creepy, unsettling imagery. What the children are supposed to think, I don’t know. But if you’re looking for a family movie about toys that come to life and are trapped in an Orwellian concentration camp, you’d be a lot better off renting Toy Story 3. 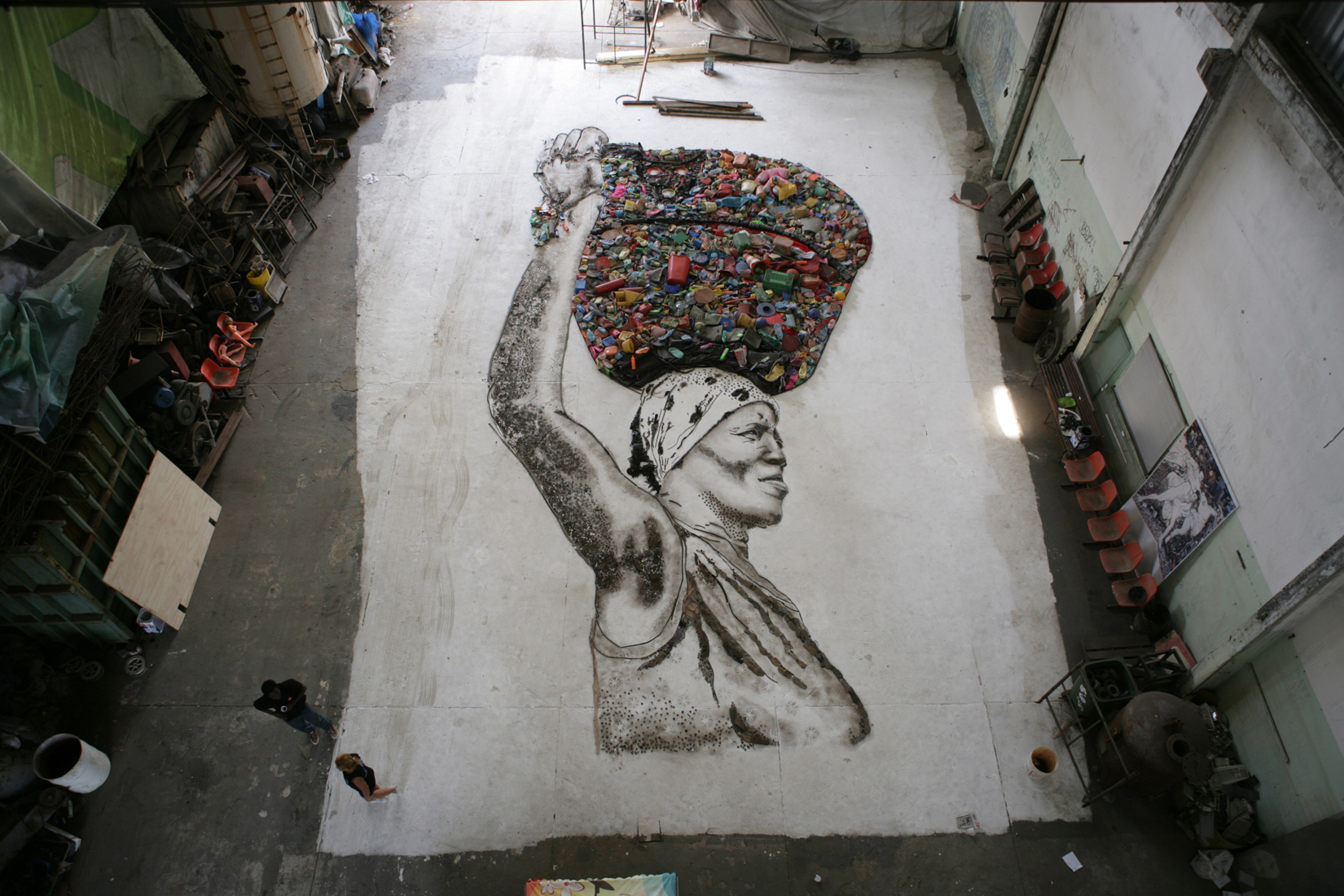 A scene from the documentary ‘Waste Land’

After tearing up the festival circuit, this epic documentary is opening in Toronto only at the TIFF Bell Lightbox. British director Lucy Walker (Countdown to Zero) follows renowned Brazilian artist Vik Muniz as he returns to his homeland to “give back” to the people. Muniz, who was born into a poor family in São Paulo, finds his material in Rio di Janeiro’s Jardim Gramancho, one the world’s largest garbage dumps. He creates installation-scale photos of freelance catadores, or pickers, who salvage recyclable debris from the mountains of trash. Then he enlists the pickers in “colouring” the portraits with recycled debris. There’s a certain Oprah effect at work as this art star elevates and beatifies the simple folk, and the film raises the issue of exploitation while giving the artist the benefit of the doubt. It’s too bad the art he creates isn’t better. The portraits assembled from the junk have an earnest ring of social realism. And there are some unanswered questions left dangling as Muniz seems to adopt attractive women from the catadore casting dump, while back home his marriage unravels. Nevertheless, Walker’s documentary is an eye-opening trip to a part of the world where garbage serves as liquid currency for people who salvage dignity from degradation with intelligence and grace. The scale and ambition of the project is extraordinary, and some of the pickers emerge as truly heroic characters. Without theorizing, the film amounts to an implicit essay on art as the commodification of trash. And Walker succeeds by questioning the morality of the project, even while projecting its inspirational message.