Why is mum the word on Canada's maternal health record?

The PM has been praised for addressing the health needs of women and children in developing countries. Just don't expect it to come up at the UN this week 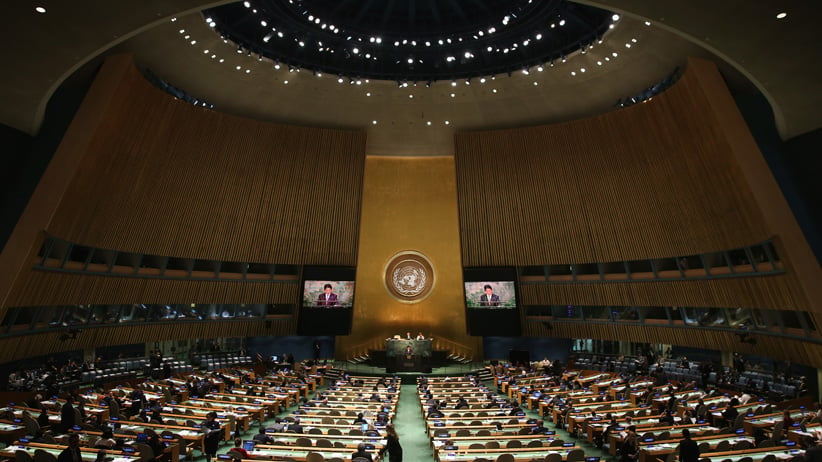 As the world meets at the UN this week, Canada’s voice will be decidedly muted. The federal election has overtaken the country and, despite International Development Minister Christian Paradis making a trip to New York to talk about the end of the Millennium Development Goals (MDGs), the top civil servant at Foreign Affairs will speak for Canada, possibly to an empty room, third-to-last among 195 speeches, and just ahead of San Marino and Palau.

While Paradis isn’t running for re-election, he is still the minister of international development. He’s in New York to speak to a UN summit about the next set of global goals to improve the lives of the world’s poor, the Sustainable Development Goals, which are the successor to the 15-year-old MDGs. That speech was on Saturday; Paradis stuck around to attend the opening of the week-long general assembly on Monday, but it will be Daniel Jean, deputy minister of foreign affairs, who delivers Canada’s message to the world on Oct. 3.

It’s an unremarkable end to an otherwise successful effort by Canada to focus the world on the health needs of women and children in developing countries. In 2010, Stephen Harper, the Conservative leader campaigning for re-election on Oct. 19, coralled the other G8 leaders into increasing funding for maternal, newborn and child health, the two Millennium Development Goals on which the world was doing the worst.

It’s possible to debate what was left out of that program—Canada refused to fund abortions and committed a minuscule amount to contraceptives—but Canadian efforts to save women and children from too-early deaths have been praised around the world.

It’s a mystery why the government wouldn’t want to celebrate that more loudly. Paradis’s department didn’t announce he was going to the Sustainable Development Goals summit. And while it is an election period, when ministerial announcements are sensitive, that didn’t stop him from appearing publicly as the minister two weeks ago to announce matching funds for donations to charities working for Syrian refugees.

Paradis’s spokesman told Maclean’s he isn’t addressing the UN General Assembly because of the election, referring to the government’s caretaker convention—the idea that while the business of government continues through the writ period, it should exercise restraint. But guidelines described on the government’s own site say it can act on routine, non-controversial, reversible or urgent matters.

It’s especially notable, because the UN made a special effort this year to get the world’s heads of state and governments to the opening session, both to mark the launch of the Sustainable Development Goals and because 2015 is the UN’s 70th anniversary, says Steven Hoffman, who has worked in the UN secretary general’s office.

“It’s really unfortunate” that Canada is only sending a deputy minister for foreign affairs and not even a minister, said Hoffman, director of the Global Strategy Lab at the University of Ottawa’s law school.

Hoffman suspects the low profile isn’t just because of the election campaign, pointing to the Conservatives’ track record of thumbing their nose at the UN. Harper once arrived in New York to accept an award in the same week as the UN’s opening, but didn’t stick around to make the speech there. He did address the assembly last year, as well as in 2010 and 2006, which isn’t out of line with the number of appearances his predecessors made at the UN opening session (three in 10 years). Still, Hoffman says of the year Harper was in the city but didn’t attend, “That’s the biggest way that a prime minister can kind of turn his back on the UN forum. What a symbolic disdain.”

One reason for the low profile may be that maternal, newborn and child health is only one piece of a larger picture of Canadian aid. While the government has increased the amount devoted to its No. 1 development objective, OECD figures show overall Canadian aid decreased last year to US$4.2 billion, or 0.24 per cent of gross national income (GNI), from US$5.7 billion in 2012. The UN standard, which is one to which the G7 countries recommitted themselves just a few months ago, is 0.7 per cent of gross national income.

The NDP has always maintained it would pump up the aid budget to hit the 0.7 per cent target, although, this week, the party softened that promise to a commitment to “set a timetable” to get there. “There,” of course, is nearly triple the current amount of official development assistance—no small feat when the federal budget is already teetering on the line between deficit and surplus.

“Because it’s so low, we’re not going to be able to turn that around immediately,” said Ottawa Centre NDP candidate Paul Dewar. “The first thing we need to do is to reverse the trend of decrease in official development assistance [ODA].”

The Liberals won’t commit to a specific target, either, Montreal candidate Marc Garneau told Maclean’s. “We are certainly observing that it’s the lowest it’s ever been,” Garneau said. “It is a concern to us that it has diminished, but, at this point, we’re not specifically coming out with a number.”

While aid organizations want to see funding increased, they say it’s also important to know how much to count on each year. “We want to see continued investment in maternal, newborn and child health, and we want to see predictability and stability and an increase in aid,” said Elly Vandenberg, a senior director at World Vision Canada.

Jackie Wright, vice-president of international programs at Care Canada, says there’s no question aid organizations need a better idea of how much money the government will devote to development. “Our margin of error is very small, so it’s very difficult for us, if it’s not predictable, to know exactly how to budget for it. And it really undermines our ability to thrive as organizations,” she said.

The Conservatives have sought private sector investment in aid to backstop the cuts and have aligned Canada’s development interests with its trade interests. In a pilot project announced in 2011, three NGOs, including World Vision, partnered with mining firms amid criticism they were working with companies that can already afford to help the communities in which they work and don’t need government money to do so. That hasn’t stopped them from expanding the private sector involvement since then.

Paradis’s speech last Saturday lasted all of five minutes, but he managed to communicate that the Conservatives don’t plan to roll back the changes they’ve made.

“Official development assistance is the central element of the global strategy to achieve the Millennium Development Goals,” he said. “However, it is abundantly clear that ODA alone cannot finance the 2030 development agenda.” Paradis called on the world to “adjust our approach” and “pursue innovative approaches such as blended finance” by working with the private sector. But, with the election 20 days away, whether Canada keeps chasing those approaches could depend on who is at the cabinet table by the end of this year.