Why student entrepreneurs should learn how to pitch

For young people aiming to be their own boss, knowing how to woo investors is key 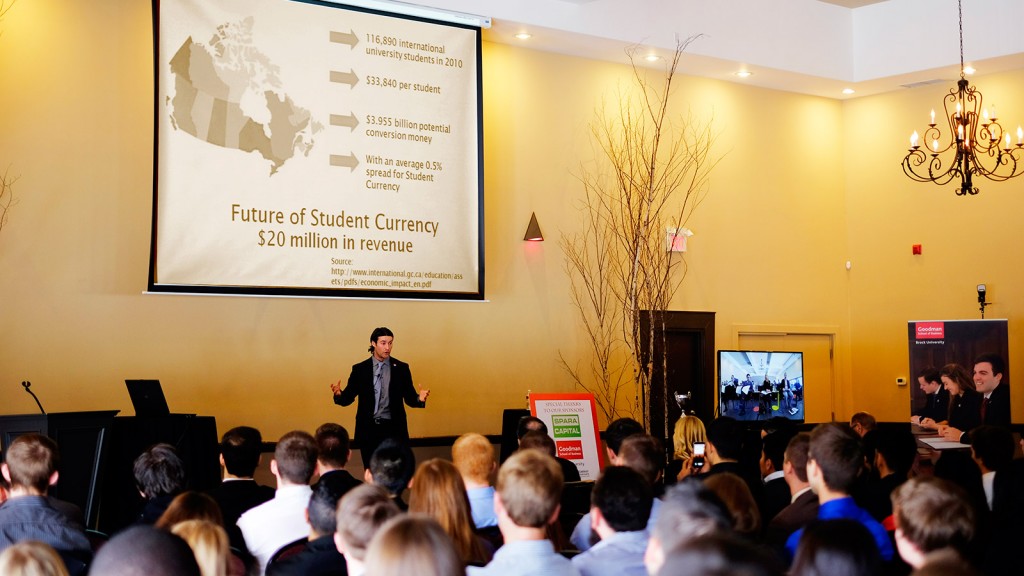 About a week before Bruce Croxon announced in mid-March he was leaving the Dragon’s Den TV show, the venture capitalist was in an auditorium near Brock University hearing pitches from eager entrepreneurs and deciding who deserved a cash prize.

The first presenter was obviously nervous, speeding so fast through his pitch about how to stop weeds popping up through cracks in driveways—it had something to do with equipment he was developing—that it was impossible to understand. The next presenters were smoother in their presentation as they made the case for an insulated “smart wallet” to prevent thieves from surreptitiously scanning tap-and-go debit cards.

Then a third student explained how he’d devised a way for publishers to sell more electronic textbooks by putting them all on a single website. Croxon, who struck it rich when he sold his Lavalife online dating service for $170 million in 2004, responded with the perplexed look he’d worn so many times on Dragon’s Den, before finally poking holes in the scheme. How, he asked, would the student get publishers to make all their books available in the right digital format for the new system all at once?

This was Brock’s third annual Monster Pitch competition, one of a growing number of contests where students show off their business plans in exchange for prizes, exposure and advice from guest judges like Croxon. That night, the $3,000 prize went to contestant number four, Johnathan Holland, who is working on a currency exchange that will allow international students to save money by pooling their orders.

Entrepreneurship has become so fashionable with students that Croxon estimates he’s invited to more than 100 schools a year. The shaky job market explains why. Among post-secondary students polled last year, only 29 per cent were confident they’d find work after graduation, yet 46 per cent said they planned to start businesses. Despite a sluggish economy, there are numerous examples of student entrepreneurs to aspire to: David Karp sold Tumblr to Yahoo last year for $1.1 billion at age 26. Facebook founder Mark Zuckerberg, 29, is now estimated by Forbes to be worth $28.5-billion. Every week seems to bring another high-flying tech IPO fronted by a university-aged CEO.

While it may seem like all you need is a good idea to lure investors, many successful entrepreneurs test multiple concepts before finding one that works, and even great ideas won’t get far if novice CEOs can’t convince investors they’re ready. “It’s really rare that you’ll find a killer idea and have the confidence that they’re going to execute it,” says Croxon. That’s why universities and colleges are partnering with student clubs and business incubators to help students practise their pitches before asking for serious money.

Eugene Dong wasn’t sure whether the software he and two classmates developed for a class in the operations management program at BCIT could be a viable venture until after they presented it to business leaders at the school’s showcase event in 2012. Less than two years later, Richmond, B.C.-based Procurify has clients on five continents, 18 employees and a $400,000 investment from Mark Cuban, owner of the Dallas Mavericks NBA team and an investor on Shark Tank, the U.S. version of Dragon’s Den.

For Dong, everything started when a professor assigned them to work with a real company on a real problem. They found managers were struggling with how to keep track of some types of employee spending. Workers might email managers to ask for permission to buy laptops, stay in hotels or rent cars, but bosses would have trouble knowing how much of their budget was spent until weeks later when numbers from hard-copy receipts got punched into accounting programs. An employee of ASCO Aerospace was in the audience at the showcase and was so impressed that he asked Dong’s team to build them a system.

That event wasn’t the first time Dong pitched his ideas. Earlier that year, he won in the Grizzly Den competition held by the Zen Launchpad incubator in North Vancouver, B.C., for another proposal. Winning gave Dong the confidence to stick with entrepreneurship. He used the prize, a free course at BCIT, to learn how to develop iPhone and iPad applications. Procurify just launched its first app.

Alexandra Greenhill, a Vancouver-area physician turned entrepreneur, points out that pitching competitions aren’t just for students. She was 36 when she started MyBestHelper.com, a website where busy professionals can find child care and elder care workers they can trust. Things didn’t get rolling until Vancouver’s 2011 Startup Weekend, an event where developers, designers and entrepreneurs pitch ideas on a Friday and try to develop a prototype by Sunday. The judges gave her valuable advice: “Always ask users what they want rather than making assumptions based on your own experience,” she says. “I was reluctant to take clipboards to the street and ask people, ‘Would you have two minutes to give some advice?’ ” But the experience helped her better understand what potential customers needed. She made contacts with software developers who helped her turn MyBestHelper into a reality and now a full-time job.

Nana Osei was convinced owning his own business was right for him but hadn’t found success until he pitched his eyewear company at a Carleton University contest in January 2013. He’d tried his hand at previous ventures: a limousine service, a trade show and vertical gardens (designed to grow on indoor walls for their aesthetic appeal). Then he hit on the idea of making frames for glasses out of reclaimed wood from Africa. Originally from Ghana, he thought people would be keen to buy a product that’s both environmentally sustainable and from a company that aims to eventually help Africans by providing employment; Osei plans to build a factory there. Representatives from Invest Ottawa, a business incubator, took notice and helped him develop his idea and practise his presentation. Weeks later he was in front of the Dragon’s Den cameras asking for $75,000 for 20 per cent of his company.

Andrew Moffat, an Invest Ottawa entrepreneur-in-residence, says Osei didn’t always have the confidence he exuded that evening on TV, but developed it by practising his pitch again and again. It turned out he needed more than confidence—Osei now admits he should have listened to his Invest Ottawa mentors when they warned him that the Dragons would balk at his valuation, which they did. A year later, his company, Bohten, is slowly growing. He managed to get his product into five specialty stores, has steady online sales and some months he’s even turning a profit. Now he just needs to convince a bigger retailer to sit down and listen to his pitch.