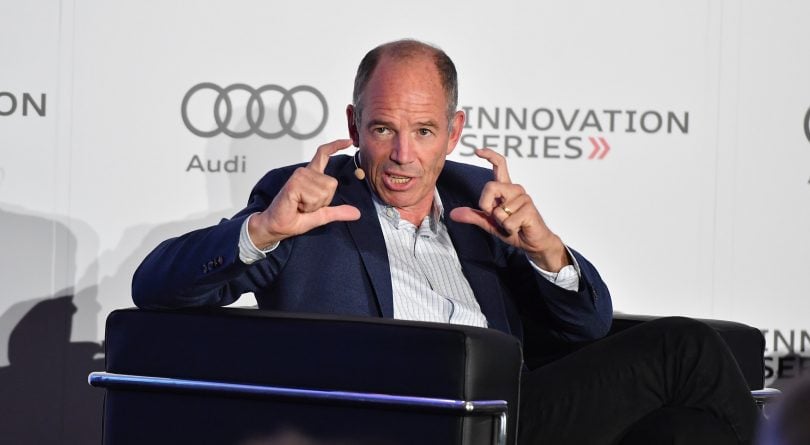 Like a character actor whose name gets buried in the credits, Marc Randolph played a key role in shaping Netflix, but without the acclaim and name recognition of the streaming service’s leading man, Reed Hastings.

Randolph co-founded Netflix with Hastings in 1997, leaving the company in 2004. He now spends his time as an investor and mentoring young entrepreneurs. He spoke with Maclean’s while in Toronto recently for a keynote conversation at the second Audi Innovation speaker series.

You’re known as the co-founder of Netflix, but tell us what you’re doing now

I left Netflix more than a dozen years ago. Netflix was my sixth start-up, and that point I decided I didn’t have it in me to start another company. At least that’s what I thought at the time. Once you’re an entrepreneur you’re always an entrepreneur, and you need that fix. So, I figured out a way to get the fix by working closely with early-stage founders, helping them get their business going. I kind of embed myself with them, so I can sit around the table and solve really hard problems with really smart people – but then I get to go home at night and they have to stay up all night working on it. It allows me the opportunity to indulge a lot of my other passions, but really feel I’m playing a part in helping get other things off the ground.

You’re invariably referred to as ‘Netflix co-founder Marc Randolph.’ Are there some other ventures you loved that didn’t find similar success?

First of all, if Netflix is an albatross, it’s a pretty damn good albatross. I can think of a lot worse. I’m an early-stage guy – I love starting out at the beginning. One of my bywords is that nobody knows anything, including me. If you’d looked at all these ideas, including the seven companies I’ve been involved in starting, and said ‘Which will be successful and which won’t?’ nobody could know. The most recent start-up I’ve been involved in is a data sciences company called Looker, and when we started we had a totally different idea for what that company was going to do: Who [its product] was going to be sold to, how it was going to be sold. We let that company and that product find itself, and it completely surprised us. It’s probably going to be my second most successful company.

READ: Big money for innovation, but questions about the strategy behind it all

Absolutely. Addictive sounds like you stumble on something, but in this case it’s always been there. It’s a drive and somebody seeing the world in a certain way – as problems that are crying out to be solved. You would no more walk past a squalling baby and pick it up and nurture it. It’s the same way you feel when you encounter this problem that needs to get solved.

How would you define innovation?

Innovation is doing something in a different way, but it also has a subtext: When there’s an established way, and that way is considered the best practice and how it’s traditionally been done, innovation comes by and says ‘Let’s try a different approach.’ It doesn’t need to be big or company-wide – it could be a single thing.

READ: Best of Netflix Canada in June: The three things you should watch this month

What did Netflix teach you about innovation, and how have you applied that learning to subsequent ventures?

Netflix was created fairly early in the internet age, when a lot of the tools we take for granted now didn’t exist. One of the things we embraced early was testing ideas quickly and, frankly, quite sloppily. The insight was that it didn’t need to be only good ideas: If you could figure out how to do it quickly and easily, you could test almost anything you thought of. That was one of the big insights that actually allowed Netflix to move as quickly as it did and become as disruptive. We built a culture and a system to let us try hundreds of bad ideas, which quickly enabled the good ones to surface.

We were doing that way early. It can be applied not just small scale, but large scale as well. You can take very aggressive risks if you’re willing to back out of them.

Was there a single moment when you knew Netflix was destined to be a success?

Even now there’s a healthy dose of paranoia [within Netflix], and there should be. Every time you scale one little hill, you wake up and realize all you did was scale a little hill, and there’s another one ahead of you. That never goes away. However, there was a major turning point quite early, when we transitioned from being a company in search of a repeatable and scalable business model, to one that actually discovered something which customers were actually willing to pay us for. Once we discovered that, we weren’t lurching from idea to idea trying to stay alive – we were onto something. That’s when a company begins to take off.

READ: Canada is lagging on innovation—and the Liberals aren’t helping

What are some of the most common mistakes you see would-be entrepreneurs make?

They all make the same mistake, which is that they overthink it. They keep this idea in their head, and make it more and more elaborate, solving all these problems that don’t really exist yet. What they should do is immediately take their idea and test it against the real world. Most of what I do when I work with young entrepreneurs is help them brainstorm ways to test their idea quickly and easily. Most people have great ideas that, once they throw them into the world, they’re going to realize what their flaws are. Get it out of your head and into the real world. I don’t believe in good ideas any more – whatever you tell me is almost certainly not going to be a good idea, but it’s a starting point. I pay almost no attention to the idea: I’m looking at the team [to see] if they have what it takes to keep on trying, to keep testing things, and are they willing to change all their pre-set beliefs as they encounter new information. You’re looking for persistence, creativity, someone who’s in love with the problem, but not necessarily the idea. Someone who has self confidence, but will also listen. It’s a very rare thing.

You’ve talked about disruption coming quickly. What can businesses do to future-proof themselves?

In a nutshell, it is all about the people. What you have to do is build a culture that is responsive to change. Once you’ve had a stable business for years, you do the obvious thing: You say ‘We need to have people to do these systematic things over and over again.’ You become very good at that, but those are the wrong type of people who are able to respond quickly to a changing world. If you want to disrupt-proof yourself, you have to make those changes in your people, your culture and your systems to allow you to respond quickly.

Many businesses remain risk-averse, so how do you encourage that?

The good thing about working [in the start-up space] is that there are still lots of big, fat and lazy companies to go after.

Do you think there’s a specific space that’s next in line to be transformed by technology?

Even I am shocked at the speed with which technology is coming after almost everybody; there’s almost no industry that’s immune to it. All the industries that I thought would have taken a long time, even things like healthcare and financial services, those walls are coming down so quickly. I travel around the world speaking with large and small companies, and I’m always struck by how scared people are, and the wide range of industries that are seeing these threats. It’s coming fast, and greater change is coming even faster.