Briony Smith, 30, is a fashion writer 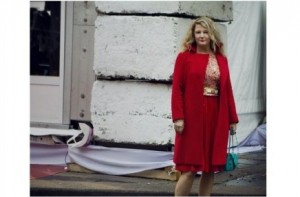 Briony Smith, 30, is a fashion writer, editor and stylist. She grew up dreaming of working in magazines and The Martlet student newspaper at the University of Victoria got her that first byline. After finishing a Bachelor of Arts in English and Creative Writing, she did plenty of less-than-thrilling work. These days she covers emerging style in Toronto, contributing to The Grid, ELLE Canada, Chatelaine.com, MuchMusic and others. The money isn’t great, but she’s loves the hustle.

Click to hear Briony Smith on the ups, the downs, and the modest pay in fashion writing (6:30)

Tell us who you are and what you do.

My name is Briony Smith and I am a writer and editor. I am the in-house fashion person for The Grid newspaper, writing and styling their fashion page. I also write for places like ELLE Canada, LOULOU, Toronto Life as well as Chatelaine.com, FashionMagazine.com, ELLECanada.com and I also do freelance styling for MuchMusic. For my day job, I work as a senior editor at Totem Brand Stories.

Wow, so you’re busy. How did you get started in this line of work?

I’ve always wanted to work in magazines my whole life. I was always a big magazine junkie when I was a little kid. I would read Vanity Fair and Vogue when we were on our long summer boat trips and it made me fall in love with it. But what got me completely started was The Martlet, the student newspaper at the University of Victoria, which really got me going, getting published for the first time.

So obviously you’ve got enough freelance work to make a go of it now, but was there a time when you had to do a lot of internships and things like that?

I did sort of a bunch of different things along the way. I did the co-op program when I was in university. So I did four co-op work terms. I did two in government. If you know me now it’s kind of funny to picture me working in a government office. I also did two magazine internships as well. Along the way, in journalism, you often have to do things that are not in your immediate line of interest. I was a technology reporter for two-and-a-half years. You can always take something away from it, I find. Like, in that case, there’s always a lot of worse beats you can cover, and I got a feel for filing really fast and churning out the copy. You kind of get something out of it along the way, from each and every assignment.

Is the job as glamourous as it seems?

It is and it isn’t at the same time. On the one hand, there’s tonnes of glamourous things. It’s actually kind of funny. You kind of forget about it when you’re in it for a while and then you step back for a minute and realize how amazing it is to work in fashion and in publishing.

I’ve gotten to go to Barcelona on a press trip. I never buy beauty products because I get so much of that for free. You get to go to fancy parties all the time with tonnes of free fancy booze and get gift bags and hang out with your friends who also work in the industry. I get to work on fashion photo shoots which is so amazing and such a creative thing to do, and kind of fancy. You get to style models and dress people the way you want to dress them, which is amazing.

On the other hand, it’s not glamourous in that the money’s not great because budgets are really tight in Canadian publishing. It’s not glamourous because you’re competing for the same teeny tiny number of jobs with thousands of other people… Then there’s like 100s as well who are kind of qualified. Then there are dozens who are quite qualified and have a lot of great experience. Then there is another handful who are just as driven as you, just as talented, just as creative, just as amazing, just as special—so it’s a pretty tight industry.

And also the hours are long. It’s called hustling for reason. You have to really work hard. Me and my peers who really make a go of it, we don’t have a lot of down time. You spend your free time pitching or networking or trying to drum up the next great idea or story or photo shoot or “in” to get into the industry. Or if you’re on staff somewhere it’s always trying to stay ahead of the competition.

How did your formal education at the University of Victoria help you with your career, if at all?

It did. I was a double major in English and Creative Writing. So I didn’t actually take any journalism courses or any J-school stuff. You could say my formal education was by volunteering and working at a student newspaper and working under amazing editors there who taught me the ways.

I also read a lot of creative non-fiction and journalism which is, I think, how you often learn—just by reading other people who are amazing. You just kind of learn it by osmosis and if you’re smart you can kind of pick up the tricks.

I think my English degree was helpful in that you have to learn how to do close analysis of passages, rather than just glossing it over or skipping it over like the surface of the water. But what I really learned from there was the major importance of choosing exactly the right word.

Once you do make it, once you do have a number of clients, what the pay like?

In magazines you can make hardly any money. I know some people starting out can make $30,000 a year, especially in the post-recession times. You can make, like hustling as a freelancer, I’ve heard of someone who is a long-term prominent freelancer and he makes like $45,000 a year. But that’s doing not very much corporate work. If you do a lot of corporate work then you can drum up like big bundles of cash and maybe make like $60,000 or something. Supplementing it with long-form feature writing, you could maybe drum up some cash, but those are also very time intensive.

And another thing that’s kind of, not upsetting, but I guess unfortunate, is that, let’s say for instance you have worked for a while, let’s say you’re like 30 and a senior level, so me or some of my colleagues, you’ll still only be making roughly $50,000 to $60,000 a year and that’s if you already have like eight years of industry experience. A lot of my friends and colleagues who are not in journalism are like “are you joking, that’s how much money you’re making at that point in your career. How much will you ever reach?”

So that’s one thing I’ve always made peace with. I always try to not complain about making not that much money in magazines and publishing because you definitely don’t get into it for the money. I’m always like, this is the life I chose and there’s no point complaining about it because you knew going in that you’d never make that much money working in magazines. It’s just the way it is, you get to have an awesome life and a creatively fulfilling life instead!