He begged for a job with a cardboard sign

Entrepreneurial grads like him now find plenty of help 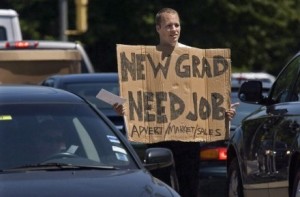 Jordan Smith was desperate. It was July 2009 and he was unemployed and struggling. A recent graduate, his business degree from Memorial University was proving to be poor bait for potential employers. To top it off, it was mid-recession.

“I couldn’t find a job,” he recalled. “Nobody was hiring. If anything they were laying people off.”

So the 23-year-old devised a plan. He printed off a stack of resumes and constructed a large sign from a piece of a refrigerator box. It read: “NEW GRAD. NEED JOB.”

Early the next morning he set up shop at Halifax’s busy Willow Tree intersection. He waved at cars and handed his resume to anyone who would take a copy. The stunt earned him national media attention and 15 job offers, including one selling ads for a Halifax weekly newspaper, which he accepted.

But the story doesn’t end there. Like many university graduates, Smith soon realized that his vision of a starting pay cheque didn’t line up with reality. He was pulling in roughly $30,000, a paltry amount, he thought, for a university graduate. So he hatched another plan: his own company. Launched in 2011, OneLobby has developed software for the event management industry. The software helps event organizers with budgeting, logistics and other tasks. The startup has secured $500,000 in seed financing and 30 early adopters. A full launch is expected this spring.

“I couldn’t find a meaningful job, so I created one,” he says, “and eight others.”

Like many recent graduates, Smith is setting his own course down an entrepreneurial path. It’s a decision he says is increasingly easy to make thanks to an emerging wave of organizations aimed at aiding startups and young entrepreneurs.

Take, for instance, the proliferation of business accelerator programs, from Vancouver’s GrowLab to New Brunswick’s Launch36 program, which aims to launch 36 companies over three years. In each case the approach is roughly the same: take a select group of high potential startups and surround them with mentors, business experts and investors.

Montreal’s FounderFuel accelerator provides startups with $50,000 in seed capital in exchange for 9 per cent equity, as well as access to veteran entrepreneurs and investors. Hundreds of startups apply to FounderFuel, but only about 10 are chosen for each cohort. The 12-week program has accepted companies from Vancouver to Newfoundland, and from as far away as Argentina.

“We get them where they need to go faster, in terms of product development, business development, marketing—all aspects of building a startup,” says Ian Jeffrey, a Montreal entrepreneur who worked in Silicon Valley before becoming FounderFuel’s general manager. “The goal is to expose people to the startup life and create new companies.”

Henry Chong’s company, Revelo Bikes, received its boost from Toronto-based MaRS, an innovation centre focused on supporting entrepreneurs and startups. Chong worked in IT for 20 years before quitting and enrolling in industrial design at OCAD University. His thesis project involved designing the LIFEbike, a small electric bicycle aimed at commuters.

“By the fall of 2011 I had one prototype and an office, but no road map and no funding,” he says. A friend directed him to MaRS’ Entrepreneurship 101 course. Chong signed up and his project eventually won the 2012 Up-Start! Competition’s $10,000 prize.

“It was a real change of fortune,” he says. The made-in-Canada LIFEbike will go on sale in May.

Three of the teams have since attracted angel investment while four have been accepted into accelerator programs. “By the end, the teams had startups that businesses were willing to invest in,” said co-organizer Mary Kilfoil, a professor who attended the Lean LaunchPad Educators Program at the University of California Berkeley before launching the Dalhousie course. Starting Lean may unique in Canada, but that could change. “I’ve been asked to share a lot,” she says.

Jordan Smith says such programs will help convince more students and recent graduates to follow him down the entrepreneurial path. And he welcomes the competition. “There’s never been a better time to start a company.”