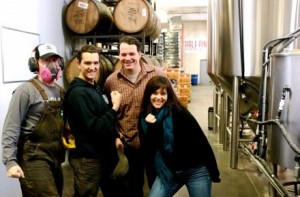 Nicole Barry, now 34, had an unusually long-term plan for a 20-year-old woman. She and her then-boyfriend (now ex-husband) would both get jobs in their 20s and then “reconvene” in their 30s to open a brewery in their hometown, Winnipeg. To hold up her end of the bargain, Barry became a Certified General Accountant, earned Bachelor of Business Administration from the Southern Alberta Institute of Technology and got a job as a controller for an insurance company. Then a severance package allowed the pair to fast-track their dream and at age 27 Barry became co-owner of Half Pints Brewing. Seven years later she has 14 employees.

How did you get from university to starting your own brewery?

My parents were entrepreneurs so that was something bred into me—the whole DIY lifestyle. I didn’t start off wanting to become an accountant or a CGA but I realized that if I was going to be successful being my own boss, at some point I needed a strong business education. I’m fairly smart and I’ve seen people succeed and fail and so having a good backup career was a good plan. My then-boyfriend and I decided he’d go to brewing school and I’d do the business side of things.

How did you spot the craft beer trend back then?

I have this mixed bag personality where I can be the accountant girl, but I was also going to punk rock shows at age 15. The Winnipeg music scene was really big in the 90s with Propaghandi, and the Weakerthans developed from that scene. The music scene lent itself to the ‘support local’ movement. So when I became of drinking age I was like, ‘I’m not going to support mass beer, I’m going to support the little guy.’ But there wasn’t really much [craft beer] going on in Winnipeg.

You went from a stable job in insurance to the opposite. What was that like?

That was terrifying, of course! When I was working in a corporate environment, I had a lot of successes. My resume looked great. My T4s looked great. But I wasn’t very happy. So for me to leave behind security and a regular paycheque for the happiness of going to work everyday and loving what I do… that was what kind of gave me that final push. And I love what I do. Today I can go to work everyday and I’m super excited. The employees that we have at the brewery love their jobs.

So you didn’t love your job in accounting. Are you still glad you did your CGA?

Yes. I use my CGA everyday, it’s just in an environment that I love more. You’re not just getting accounting skills when you get your CGA. You learn how to purchase inventory, production management, hiring, soft skills, financial analysis—which I do everyday.

How long was it before you could give yourself a decent paycheque?

I made sure we were paying ourselves first. That meant that sometimes we had to work around the clock, but I set up the business plan so we were getting paid from the get-go.

Did you eventually make it to the point where you were making more than in your old job?

Yeah. I make a comfortable living that I’m happy with. Me and my business partner could probably take more but I’m okay taking a modest salary and reinvesting back into the brewery.

What’s your favourite part of the job?

Something I never dreamed I would do when I took my first accounting course: beer menu planning and beer pairing. I love sitting down with a menu and chef and pairing beers with it. ‘This Russian Imperial Stout is barrel aged with really nice vanilla notes goes really well with this course.’ I host quite a few beer dinners and tasting events. Those are fun. We have one on Saturday.

Are there any things about the job that you really don’t like?

I’d love to be the boss that never has anything bad to say. No one wants to criticize. That’s obviously the least fun part of the job. Also working on the [other] non-fun stuff: dealing with city inspectors and liability insurance. There are non-sexy parts of running a brewery. We’re not frolicking amongst the tanks or drinking beer at our desks—though I do that sometimes.

If you could go back to age 27 and give yourself advice, what would it be?

Looking back now at the 27 year old, I would say ‘I’m really proud of you for taking a risk.’ Because I don’t know if I’d even take such a big financial risk now. I find people say ‘I’ll wait until I’m older,’ or ‘I need to be more secure.’ I think it’s better to take the chance and fail than not take the chance. That ideology is something I really believe in—to choose your happiness. It’s a choice.

People get into a career by the time they’re in their 30s, they’ve ventured into salary increases and their mortgage has gotten bigger and they may have kids now, so there’s more impact if a failure was to occur. I really respect people who are younger and taking a chance. It’s not easy. You’re going to work through the night at least a few times. But I love to coming to work each day.