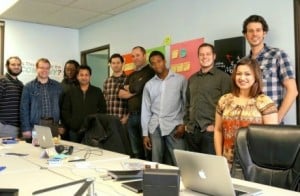 LeadSift’s team including Das and Chatterjee

The student founders of LeadSift, a company whose software combs through Twitter and Facebook data to generate sales leads, set out last fall in search of $500,000 of investor cash.

It was an easier than expected hunt.

The Halifax startup pulled in $1.13 million, including $500,000 from OMERS Ventures (the venture capital arm of OMERS, one of Canada’s largest pension funds), as well as a contribution from Dan Martell—Canada’s 2012 angel investor of the year, according to KPMG and Techvibes.

The LeadSift foursome, international students from Dalhousie University and Acadia University, could have raised more money, but decided to cap their fundraising round and ultimately turned away some interested investors.

But just because the money was easy to come by doesn’t mean the process was stress free. “We’re first time entrepreneurs. We have no experience,” says co-founder Tapajyoti Das. “Thankfully we had tremendous mentors and investors who helped us through the process.”

LeadSift’s rise is impressive, and it’s not the only evidence of a budding technology sector in Atlantic Canada. In 2011, California-based cloud computing company Salesforce.com paid $326 million for New Brunswick’s Radian6, whose software allows big companies to track what is said about them online. Last year, Salesforce swooped in again, paying $70 million for Halifax’s GoInstant. Their software enables Internet users in different locations to surf the web in tandem.

LeadSift is also connected to Salesforce.com. In October, the companies signed a 50-50 revenue sharing agreement. Shortly after that, LeadSift won a competition at Ad:Tech New York, a digital marketing event. That led to an invitation to help American industrial behemoth General Electric boost its sales through social media leads. LeadSift’s software is currently being testing by early adopter companies in the U.S., South Africa and New Zealand. A public launch is expected May 1.

The startup’s early success has come at cost, however. The immense workload recently forced Das to abandon his pursuit of a master’s degree in computer science. Das finished his required course work at Dalhousie in 2010, but has since struggled to complete his thesis. “I have not looked at my thesis in the last eight months and I don’t think it will get any better in the next eight months,” he says. “Every waking moment I have is spent on LeadSift and I think that’s the way it should be.”

Das arrived in Halifax from Calcutta in 2002. He made the trip with Sreejata Chatterjee, a childhood friend. The pair eventually met the company’s other founders: Hatem Nassrat, who hails from Egypt, and Daniel Allen, an Acadia student who is originally from the Bahamas. Like Das, Chatterjee is pursuing a master’s degree in computer science, though she’s not ready to dropout—yet. She continues to pay tuition to hold her spot in the program, but admits she hasn’t looked at her thesis for nearly a year. “And I don’t think I’ll get to it for the next year,” she says. “A first time entrepreneur cannot do school and a startup together. You have to pick one.”

If LeadSift’s success continues, few will criticize their choices.