Now we don’t have to worry

Mom, dad, big brother and sister—everyone was scrimping to keep Jessica Holman in university. The Maclean’s $20,000 scholarship changed all that. 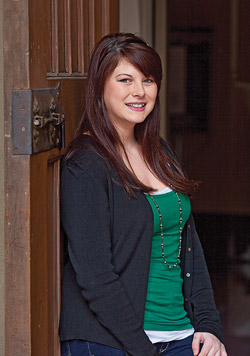 Jessica Holman almost didn’t apply to university. Once accepted, she almost didn’t go. Even after a successful first semester of social work at Carleton University, she often felt she should be working instead of studying. The thing constantly nagging at her? Money.

That’s why Holman started crying when a woman from Maclean’s told her that she’d won the $20,000 scholarship contest, which was part of our 20th Rankings Issue celebration. She was chosen at random from more than 27,000 entries. “Maclean’s didn’t know how badly my family needs the money, so it’s kind of astonishing that we were the ones who won,” says Holman. “Now we don’t have to worry about whether or not I can go back to school next year.”

When she says “we,” she means her entire family back in Oakville, Ont. Her mom, dad—even her older brother and sister—are all scrimping and saving to help her pay for school. Her experience is a good reminder of how much many Canadian families sacrifice to send their kids to university. All in, it now costs roughly $80,000 for a four-year undergraduate degree, according to TD Economics. For many families, it’s a struggle to put even one child through school.

Research shows it’s an even bigger struggle for children whose parents never attended university, like Holman. If it wasn’t for a high school counsellor who helped her realize that it’s common for “first-generation” students to doubt they’ll succeed at university, she may never have applied. “My counsellor changed my life,” she says. “She taught me to just take things one day at a time, and she believed I was capable of doing great things. I would not have graduated from high school without her.” That counsellor is part of the reason she chose a social work degree, she says.

As challenging as it was to gain the confidence to apply, it was even more challenging to ?nd the money. Shortly after she was accepted, Holman’s dad fell ill and had to take sick leave from work, drastically reducing the household income. But she worked hard after class and during the summer at the local hospital. Her mother took on a third job. Student loans and grants covered the rest. Still, she was considering dropping out and working full-time to help the family dig out of debt—until she won the $20,000.

Now, she feels like she can relax a bit, even if she isn’t exactly rich. “Twenty grand is going to help a lot, but it’s never enough when it comes to university,” she says. She’s planning to stick to the same budget she started with in September, and so far she’s been good. On the night she won, instead of going out for dinner, she and her roommate cooked chicken and no-name pasta in their two-bedroom apartment. (Unlike most first-year students, Holman lives off-campus, where rent and food are both cheaper than in residence.) There are no plans to have a party or take a vacation south for spring break. Instead, she’s looking forward to celebrating with her family over a home-cooked meal. “It’s as good as any restaurant you can name.”