Should articling be scrapped?

A shortage of positions in Ontario forces a reevaluation 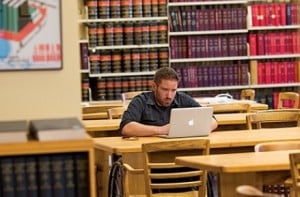 From the Maclean’s Professional Schools Issue.

Mathew Mezciems thought he was doing everything right. He got into one of the country’s premier law schools and set his sights on extracurricular activities that would set him up for a job on graduation. Big firms look for leaders—or so goes the conventional wisdom. So at the end of his first year at Queen’s University in Kingston, Ont., Mezciems ran for a junior position on the law students’ society, and won. The following year, his peers elected him president.

The job consumed a surprising amount of time. “There are meetings during the week with faculty,” says the 27-year-old, “and office hours where students can come and talk to you.” By the end of his second year, his grades had slipped into the Bs, and Mezciems found himself without one of the all-important summer student positions that serve as entryways to articling. After graduating this spring, he still couldn’t find an articling job—a predicament that not long ago would have been unthinkable for such a prominent student. “I’m trying not to be worried,” he said last June from his home outside Kingston, the strain audible in his voice. “You have those moments of panic, but I’m trying to stay positive and not get too overwhelmed.”

Mezciems might have felt left behind, but he’s in good company. As many as 15 per cent of Ontario’s roughly 1,750 law graduates may fall victim this year to an articling shortage in the province that is having a ripple effect for firms and students across the country. As recently as four years ago, more than 94 per cent of Ontario’s law grads were able to land the 10-month apprenticeships, which are required to get a licence to practise, and often led to positions as associates at the same firms. Those halcyon days are over, as students jockey frantically for coveted spots, and cases like Mezciems’s multiply. In a 2009 survey, only 661 of 7,749 firms contacted said they were offering articling placements, and more than two-thirds of those were located in Toronto and Ottawa. At last count, more than one in 10 of that year’s law graduates had not yet landed articling jobs.

The province does not yet face the crisis seen in the U.S., where some 40 per cent of last year’s law graduates couldn’t find work in their profession. And other provinces don’t seem to be experiencing quite the same problem. Alberta and B.C., for instance, expect to place more than 90 per cent of this year’s graduates.

Still, the shortage has drawn scrutiny to a centuries-old rite of passage that Canada’s legal community inherited from its British forebears. Critics say that the articling requirement now blocks graduates from working, while driving up the cost of legal services by limiting the number of lawyers entering the profession. For students, it stokes more pressing concerns: tuition at the best law schools now ranges between $14,000 and $28,000 a year, meaning many emerge with six-figure debt when money owed from their undergraduate years is factored in. “A lot of us need to go to work right away after graduating, or we’re headed for financial ruin,” lamented one second-year law student, who asked that her name not be used. “Until you find a job, it can feel like the deck’s stacked against you.”

Stacked enough that the folks who license lawyers in Ontario are considering radical alternatives. Last winter, the Law Society of Upper Canada struck a task force to look into scrapping articles in favour of a more accessible requirement, such as a practical training course or a post-graduate transition requirement. Under the latter scenario, graduates who pass a bar exam would then have a certain period to show they’ve been working as lawyers to keep their licences.

About the only option not on the table is dumping articling altogether in favour of a U.S.-style system, where students are licensed to practise upon graduation once they pass the state bar exams. “No matter how the ultimate recommendations are framed, they will include some form of transitional training and measurable standards,” says Thomas Conway, the law society’s treasurer, in an email. The panel’s final report is expected this fall, at which point the law society will decide what, if anything, it plans to do.

A solution won’t come easily, in part because no one wants to take ownership of the problem. While the number of articling positions has grown more slowly over the last decade than the number of graduates, law firms bristle at the suggestion they’re shirking their responsibility to the profession by shutting students out. “I don’t think it’s our responsibility to create any more [positions] than we already do,” says Deborah Dalfen, in charge of recruitment for the Bay Street heavyweight Torys LLP, which hires about 25 articling students per year. “If we were to hire students we don’t intend to bring on as associates, then what? They can’t find a job.”

Law schools, meanwhile, brush aside criticism that they’ve created an oversupply of law grads by ramping up admissions. Since 2008, the number of people seeking licences each year in the province has grown from 1,400 to 1,767, and at least part of the growth can be placed at the feet of the University of Ottawa, which has increased its output of law grads by more than a third over the past 10 years, to 295. But Bruce Feldthusen, U of O’s dean of law, makes no apologies, noting that some of his graduates do their articles in Quebec, while arguing the demand for legal professionals in Ontario is self-evident. “There’s a huge number of people who couldn’t possibly afford a lawyer today because the supply is so tight and the prices have gone up,” he says. “Look, we’ve got a lot of highly qualified kids who want to work, and a lot of middle-class Ontarians who want to hire them at a reasonable rate. Those students can’t get into the bar because of the articling barrier.”

One of the few areas of agreement: students coming from abroad represent a sizable share of the glut. In 2006, the provincial government passed legislation to ensure overseas applicants get fair consideration. More than luring foreign-educated professionals to Canada, the rules enticed overseas universities to cater to law students hoping to work in this country. (One, Bond University in Queensland, Australia, created a degree program in Canadian law that has become popular with Canadians who didn’t get into or didn’t want to go to law school at home; each year, it pumps out about 60 Canadian graduates, most of whom seek work in this country). By 2011, the number of internationally educated students seeking licences to practise in Ontario had more than tripled, to 272. As of October, 43 had failed to find articling jobs.

The effect has been to put firms squarely in the driver’s seat of the recruiting process. To land an articling placement with a major firm, candidates typically must first get a summer student job with those organizations following their second year. The regimen begins with on-campus interviews—a kind of speeddating where representatives from major firms, as well as government agencies, set up an archipelago of desks in university conference rooms and interview each candidate for 17 minutes or less. “You go around the room with 300 other stressed-out law students,” says Lindsay Traves, a second-year student at the University of Windsor. “You sit down, they ask you maybe three questions. Some will literally just say, ‘go,’ and you have to talk for six minutes. Then a bell rings and you go to the next one.”

Those lucky enough to find jobs stress the importance of a fast academic start. “Get good grades in your first year of law,” says Rob Thomson, a Queen’s student heading into his third year, who is working this summer in the Crown prosecutors’ office in Ottawa. Those are the grades firms use to assess students for second-year summer positions, Thomson notes, and “summer positions lead to articling positions. You need that momentum coming out of first year.”

Some students resort to cold-calling smaller firms, a method that in today’s fragile economy can yield unpleasant results. Kenneth Bandeira, another Windsor student entering third year, recalls his testy email exchange with the sole practitioner in a small Ontario town. “You sound quite frankly like you’re on a fishing expedition,” snapped the veteran lawyer in response to Bandeira’s polite query. “I do not hire articling students and never have.”

Troubled as Ontario students are getting, law society officials from other provinces say surprisingly few have bolted for greener pastures. Those jurisdictions are closely watching events in Ontario, because a prolonged shortage of positions could result in an outflow of graduates from central Canada—and because any change to the Law Society of Upper Canada’s articling system will affect them. Under an interprovincial agreement, provinces and territories recognize each other’s legal credentials. The idea is to allow lawyers to move with ease between jurisdictions, notes Steve Raby, president of the Law Society of Alberta, “but if the articling regime becomes markedly different in one province than the rest, that’s a concern.”

As for Mezciems, he’s not about to play the stoic, putting on hold his dream of working in sports and entertainment law while hoping against odds that an articling job will surface in Ontario. Last month, still without a job, he enrolled at the University of California at Los Angeles, which offers a master’s program in the field, and lit out to the U.S. west coast. Where the degree will lead, he’s not sure. But it beats waiting by the phone back home in Kingston. “Sometimes you end up in a situation you didn’t expect, but that ends up being perfect for you,” he says. “These things have a way of working themselves out.”