Pianist from The Zolas explains how he built his business 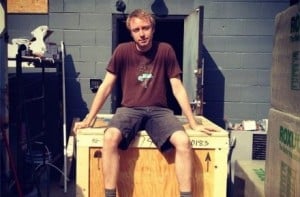 When Tom Dobrzanski started Vancouver’s Vertical Studios with a friend in 2001, he considered it a part-time job to help fund his Bachelor of Commerce degree at the University of British Columbia while he toured with The Zolas.

Since then, he graduated from UBC, studied audio engineering at CDIS (now The Art Institute) and the Vancouver Film School, and built up his skills as an engineer, producer, composer and instrumentalist in the studio alongside Indie bands like Hey Ocean! and Said The Whale.

My name is Tom Dobrzanski. I’m a music producer and recording studio owner. I started my first studio basically to create my own part-time job in university. So it was me and a friend of mine, I was in a band at the time. It was actually his idea. We each had a little money saved up and we decided to put it together to get a small simple studio where we recorded demos and people’s first CDs.

We were sort of lucky because, back then—-that was 2001—computers hadn’t quite caught up to where they are now so people couldn’t really record a CD at home. They needed to go to a little studio like that to make their recording, so back then it was still a big deal if you had your own CD, whereas today people could probably do that at home on their laptops.

What’s the point of a recording studio then?

The studio lets you take the recording to a much higher level. Things that we’re used to hearing as recorded albums and things we hear on the radio, there’s a big difference between the quality of that and what you can get realistically get on a laptop at home. You can get very close on the laptop, but maybe to get that last 10 per cent that puts you in the world where you can get played the radio or basically sounds like a professional album…

I just did that year after year after year. So I’d do a project and I’d add some equipment, the quality of my recordings would get a little better. I’d do a better projects and get more equipment and it kind of grew like that. I was lucky to work with some great bands that worked along with me.

One of the first things I ever did was a band called Hey Ocean!, which has done quite well in Canada. So you know they’ll progress and I’ll get to go along with them. Another band, Said the Whale, was the same way. They won a Juno a year or two ago. They just came in for their first recording and since then they got better and better and I’ve just tried to keep up with them.

You studied at both the Vancouver Film School and did a business degree at the University of British Columbia. How did that education prepare you, if at all, for what you’re doing now?

On the technical side, I did a course at the Vancouver Film School. I did another one-year program at this school called CDIS (now The Art Institute of Vancouver). From a technical point of view, that laid down some sort of navigational technical recording skills. So that was part of my education.

I also did a business degree at UBC, which was always my plan, and its certainly helped with running the business of the studio. You know, planning on how to finance it, expand equipment, or certainly the construction of this new project. I needed to do some real financial analysis to make sure it would work. It involved buying a building, leasing equipment… so I think the business degree gave me confidence to take some risks and know they were going to work out, in terms of expanding the studio.

What’s a typically day like for you in the studio?

I generally try to start early, for musicians, which is about 10 o’clock in the morning. I’ll get into the studio around 10 and the band will show up shortly after that and we tend to work fairly long days. So you know, working till eight, nine or 10 at night.

What’s the best part of your job?

Just when the artist is really happy at the end of it. That’s really what it’s about for me. It’s their album. You know, I’m helping them make it and I’ll have opinions all along the way, but in the end its theirs and they’ll have to take it on the road and tour it.

If someone’s thinking about getting into this industry, do you have any advice for them?

Yep. I think it’s a very challenging industry to break into because a lot of people want to do it. It sounds really appealing. My advice is that you do need to get this fundamental audio education somewhere. So that could be going to a recording school. It’s usually a two-year program. It’s really important to be the best at that school, because realistically there’s going to be more graduates than jobs.

How did you fund this at first?

At first, a friend of mine, Shaun, who I was in the first band with, and I both had some money. I was actually going to take a trip to Europe with my girlfriend at the time and we broke up, so I had this little pile of cash I’d saved up and he had some as well. From then it was quite organic, as I mentioned, so I’d just keep reinvesting in the studio.

Do you ever regret not taking that trip to Europe?

No. Not at all. I’ve been to Europe since and, nope, I think that one worked out for the best.